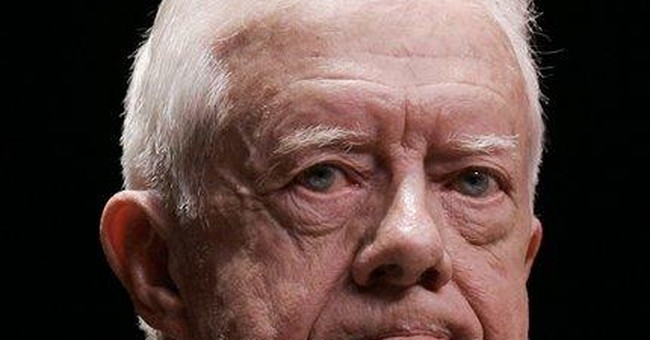 Former President Jimmy Carter is a clever rascal. The other day, when he esteemed the presidency of George W. Bush "the worst in history," he was naturally intent on bold-faced headlines. He is always covetous of attention. But there was more to it. Assigning the Bush presidency the "worst in history" is now a major theme among leading Democrats, and it cannot have been lost on Jimmy that if President Bush's presidency becomes known as the "worst," Jimmy's presidency will only be runner-up. So Jimmy rather brazenly joined his fellow Democrats and made yet another attempt to rise from history's cellar.

Unfortunately, he keeps writing books. With his 2006 blunderbuss, "Palestine: Peace Not Apartheid," he has now written 21. With each book he emerges anew in all his cheesiness, his hollowness, his ignominious smallness. It is difficult to believe that the American people ever raised him to the presidency, but then he was elected in the middle of the 1970s, a decade when America was on the run. The Soviet Union was taking advantage of the Democrats' recent foreign policy bug-out, Vietnam. Moscow's agents and allies were busily advancing the Marxist-Leninist hooey in Africa, Southeast Asia and Latin America. At home the moribund liberals were putting the final touches on their governmental monstrosity, the welfare state, thus ensuring stagflation, ungovernable cities and continued wretchedness for their victims, the poor.

Jimmy was an exemplary leader for them. When he bewailed America's "malaise," they imagined still more social engineering, higher taxes and government bureaucracies to treat the malaise. Unfortunately for Jimmy and his liberal friends, Gov. Ronald Reagan, a man Jimmy has always considered his moral and intellectual inferior, knocked him off in 1980. Jimmy turned to writing books and serving as a prof at Emory University. The books have all been insipid and occasionally remarkably bad.

His first book, "Keeping Faith," won him the J. Gordon Coogler Award for the Worst Book of the Year in 1982. For the next two decades, his infantile books were merely childish. Then in 2005 there was a dropping off. He copped another Coogler for his "Our Endangered Values." In it, he seemed to be taking credit for the foreign policy achievements of Margaret Thatcher, Ronald Reagan and the Pope, whom he incidentally accused of alienating Latin American Catholics with his ferocious anti-communism. Jimmy's fantasies often are not even amusing.

His book "Palestine: Peace Not Apartheid" is probably his worst and least amusing. It is mendacious and anti-Semitic and has attracted charges of plagiarism. It caused Professor Kenneth Stein to resign from the Carter Center because of its inaccurate and unfair depiction of Israel through three decades of diplomatic and military dealings with the Palestinians. Stein had served as an aide to Carter during most of those years. He considers the book deceitful and malicious. As the book's incendiary title adumbrates, Jimmy compares Israel with the white supremacist regime of old South Africa. Fourteen members of the Carter Center's advisory board have resigned over the book. In March, Jimmy explained these resignations to an audience at George Washington University by saying, "They all happen to be Jewish Americans."

Many years ago an early biographer of Jimmy, Betty Glad, pointed out that he began his political career appealing to Georgia's Ku Klux Klan. It is fitting that today Jimmy is charged with one of the Klansmen's key bigotries, anti-Semitism. For his efforts with this book, the judges on the J. Gordon Coogler Prize Committee are awarding Jimmy his third Coogler. No one else has won this award that many times, though the Clinton sycophant, Jeffrey Toobin, won it twice, back to back in 1999 and 2000. If he writes a book on Hillary, Toobin will probably win his third Coogler.

Yet Jimmy has now won his last Coogler. Members of the committee have decreed that Coogler Awards for the Worst Book of the Year shall be limited to three in a lifetime. I think they suspect Jimmy of writing these bad books as a publicity stunt. I disagree with them. Taking in the whole sweep of this little scamp's life, I think he really means every mean, stupid and treacherous sentiment in "Palestine: Peace Not Apartheid." He has been insincere in many of his endeavors, but when he is cheap and nasty in a book he is being true to himself.