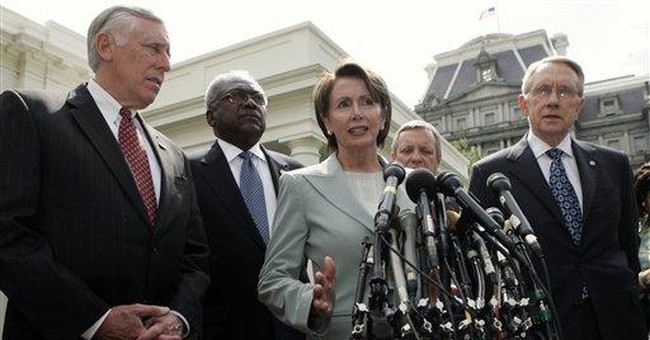 WASHINGTON -- The approval ratings of the Democratic Congress continue their swoon. When Sen. Harry Reid and Rep. Nancy Pelosi led their enlightened hordes onto Capitol Hill early this year, they promised liberation and progress. They would raise the minimum wage. Homeland security was to be made foolproof. Medicare's drug prices would be lowered by congressional writ. Moreover, they had a scheme to lower interest rates on college loans. Finally something vast and ingenious was going to be done about the war in Iraq. Possibly the congressional Democrats were going to yank our military from that inhospitable country and replace it with the Peace Corps or perhaps the Good Humor Man.

Of course, the fulminating Democrats have accomplished none of the above. They continue to shriek about Republican mendacity and corruption -- though such misdemeanors were winked at during the Clinton years. They continue their ongoing investigations, and in the case of Attorney Alberto Gonzales they may undertake the capital's first exorcism. But as to their aforementioned early promises, they remain inert. The term "Do Nothing Congress" is being heard among good government types and concerned lobbyists.

According to the Gallup Poll, the Democratic Congress's approval rating has declined from 37 percent to 33 percent in mid-April, thence to 29 percent in mid-May. That rating places the Democrats below the approval rating of the hellish President George W. Bush, and at least he has invested some of his political capital in large things, for instance Social Security reform and two wars. The Democratic leaders have achieved nothing other than raising a cloud of gloom over Capitol Hill.

Frankly I would like to know more about the lingering 29 percent of the electorate that approves of the Democratic Congress. Are these the remnants of the Angry Left we heard so much from last fall? Or are these actually Republicans who want the Democrats to continue on a load that might well lead to oblivion? In recent weeks, Reid and Pelosi appear to have been seized by an impulse to suicide. Perhaps al Qaeda will sign them up as drivers.

Consider their recent antics. Just weeks ago House Speaker Pelosi brought the full majesty of her office to the Middle East, where she visited Syria's hereditary dictator, President Bashar Assad, wearing a babushka in public deference to local misogynist customs. She shopped in a Damascus bazaar and did not even dicker over prices. Then she trilled to an agape press corps, "We came in friendship, hope, and determined that the road to Damascus is a road to peace." Whereupon she claimed that she was conveying Israeli Prime Minister Ehud Olmert's message that "Israel was ready to engage in peace talks." What is more, she insisted that President Assad was ready to "resume the peace process." That got her plenty of attention. Olmert scrambled to his feet and delivered a correction. Pelosi was misrepresenting him. Pelosi's visit to the Middle East was widely adjudged a bust, or in the words of a Washington Post editorial, "ludicrous."

Consider too Senate Majority Leader Reid. Some politicians speak in sound bites. He speaks in bumper stickers. His latest is this defeatist yawp: "This war is lost." Put that on your Volvo right next to your Kerry/Edwards sticker.

Observers of the Democratic majority on Capitol Hill will tell you that the Democrats have made a cool decision to use the present war as a political gambit. They calculate that by opposing it, they will win the support of a majority of the electorate in 2008. Their position on the war may indeed be a political calculation, but it might also reflect something deeper. Their defeatism is very similar to the defeatism the Democratic congressional majority displayed in 1973 when it reneged on Washington's promise to support the South Vietnamese under attack. It is similar to the defeatism the Democratic majority manifested in 1986 over assisting the anti-communists in Nicaragua.

The FAA Approves Media Drone Flights After Being Embarrassed by Texas DPS
Townhall
'Has someone checked on AOC?': Capitol Police report man with knife arrested at #JusticeForJ6 rally
Twitchy
Sarah Palin Is Making a Comeback, Whether You Like It or Not
Redstate
Contradictions Gone Viral
PJ Media