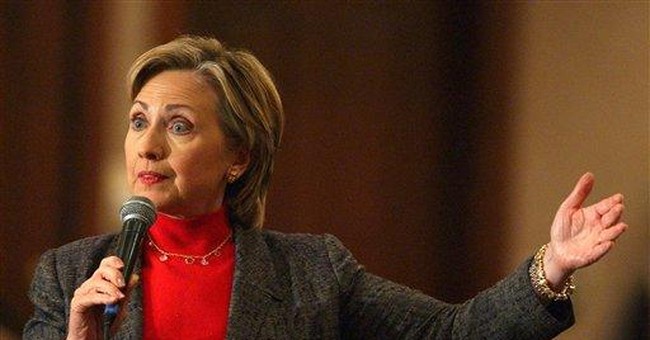 WASHINGTON -- Another week passes, and on The New York Times front page there appears yet another ominous report on the perils facing Sen. Hillary Rodham Clinton's presidential prospects. First the Times reported on the ambivalence of Hillary's Wellesley classmates toward her. Now the Times reports that a growing number of New York's black political leaders are looking favorably toward her main rival for the Democratic presidential nomination, Sen. Barack Obama, who is black. "Obama's Rise Strains Loyalty on Clinton's Turf" is the headline. The "turf" in question is New York's black Democratic electorate. In the 2004 New York state primary, black Democrats comprised 20 percent of their party's turnout. The Clinton camp has reason to worry.

Expecting Hillary to campaign effectively against Obama in the black community is expecting a lot from this middle-aged suburban lawyer, educated in the Ivy League. So the Clinton campaign is rousing America's "first black president," her husband Bill, to address black and Hispanic groups. Actually, when the black novelist Toni Morrison first esteemed the Boy President as our "first black president," I doubt she recognized the irony. Of all America's previous presidents, the one who most closely approximates Clinton, in presidential achievements and in personal frailties, is Warren Gamaliel Harding, a much-loved rascal who, irony of ironies, was rumored to have black blood -- not a compliment in his day, but neither would it be a compliment then to appraise a president a "rock star" or even a "vaudeville star." Times change.

With Obama, all Americans -- white and black -- are getting a candidate of sounder character than Clinton or Harding. Moreover, for a political newcomer Obama is mounting a surprisingly formidable campaign. He has rarely misspoken and he seems well organized. In the first 90 days of 2007 he raised more money for the primaries than Hillary ($24.8 million to $19.1 million) and he raised it from a wider base: More than 108,000 donors for Obama, 50,000 for Hillary.

Hillary's supporters seem to be what we might call the Democratic Party's old money: Hollywood and Wall Street. Obama's supporters might be seen as new money: younger donors, donors from the Internet. Increasingly it appears Hillary has troubles within the Democratic base, for instance with blacks and the next generation of angry left-wingers. Thus desperation is creeping in. She is caught affecting a phony African American accent in addressing blacks. Talk radio and Drudge boom it across the land -- more desperation.

No wonder two publishing houses, having invested heavily in books on Hillary, are rushing them out. If she does not turn this campaign around, she may not make it through the primaries. This week we heard that Carl Bernstein's "A Woman in Charge" will be out June 19. Two months later "Her Way" by Jeff Gerth and Don Van Natta will be out, possibly sooner.

I find the challenges facing Hillary's nomination all very gratifying. In my current book chronicling the Boy President's adventures in retirement, "The Clinton Crack-Up," I predict her problems. She is not a natural politician, and I even doubt that she is all that tough a political campaigner. Truth be known, she is very cautious.

When I crashed her husband's 60th birthday party in Toronto, I found myself seated with two of his top aides. They were lamentably garrulous fellows, and I was all ears. They had no idea who I was. It was early autumn. The 2006 off-year elections had yet to be decided. One Clinton aide allowed as how Hillary had yet to decide on a presidential run. She wanted to see how well the Democrats did in November. If they did well, she would probably run. If they did badly, she would probably not run. And one other thing: She was very apprehensive about running against Sen. John McCain. Now with former Mayor Rudy Giuliani in the race, my guess is she worries about facing either of these Republican frontrunners.

Now in her own party she faces the growing threat of Obama. For Hillary these are parlous times, even daunting times.