On My Campaign Trail 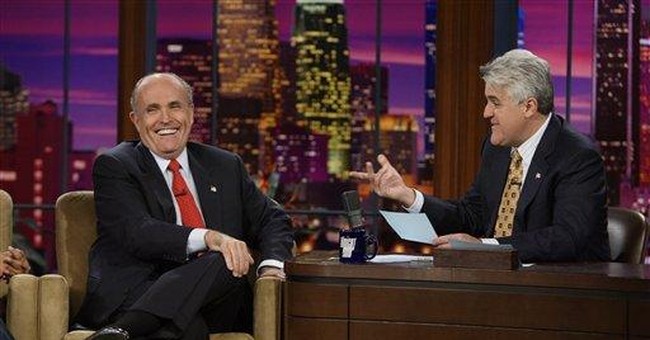 Washington -- I am campaigning. Having just published my book chronicling Bill Clinton's death-defying retirement years ("The Clinton Crack-Up: The Boy President's Life After the White House"), I am now out on the campaign trail singing its praises and denying any foul intent to harm the Clintons. In days gone by, one went on what was called "the book tour." That involved traveling to major cities, making a few appearances on literate television and radio shows, and perhaps giving a lecture and interviews to newspaper writers responsible for the literary corners of their papers. Today all has changed.

The "book tour" mainly involves undertaking interviews with hundreds of hosts from talk radio all over the country. There are also a few television appearances. All, however, are related to current news. In years gone by, authors were interviewed by journalists whose beats were strictly books. That almost never happens today. When I published my first books in the 1970s, authors were often asked to appear on the "late shows," the shows now hosted by David Letterman and Jay Leno, and the even later late night shows. These "late late" night shows would have me on when I was a young man. I never made it to the shows of Johnny Carson or his contemporary rivals. Their successors, Letterman and Leno, now never have authors on, and if the later night shows do, I have not heard about it. The nature of audiences has changed.

The biggest change is the rise of what is called "talk radio," which is almost completely dominated by conservatives. The other day I asked an amiable producer of scores of shows for ABC why conservative listeners are so dominant in the radio markets of the country. I cannot recall that he answered the question, but he did cite studies that make it clear that the talk radio audience is overwhelmingly conservative. That has not always been the case. Before there were Rush and Sean and the gang there were popular talk radio hosts in major cities and as I recall they were almost all liberals. The audience has changed. The hosts have changed. And even the networks that own these stations have adapted to the market.

Television has been slower to adapt. Of all the networks, only Fox has catered to conservative viewers. True to its motto, the network has been "fair and balanced." Many of its shows feature both a conservative and a liberal host, for instance "Hannity & Colmes" and "The Beltway Boys" with Fred Barnes and Morton Kondracke. Yet Fox has offered conservatives a place where their views are given at least some attention. The consequence is that with smaller resources to draw on, Fox has outstripped CNN and become the No. 1 cable news network in the country. I wonder when the news sections of ABC, CBS and NBC will catch on. There is nothing immoral about paying heed to the market.

In fact, if major media paid a bit more attention to the conservative market they might serve one of the purposes that a free media is supposed to serve, to wit, accountability. An enormous amount of sheer nonsense spews forth from the liberal world and is never challenged. Recently I had occasion to dip into a major book by one of liberalism's most prominent figures, Terry McAuliffe, formerly chairman of the Democratic Party and a close associate of both Clintons. In "What A Party" he retails his life in politics. I read only the paragraph that discusses the growth of conservative magazines since the founding of National Review. Here is what he says about "something called The American Spectator."

He claims the magazine "took under-the-table money from an ultra conservative named Richard Mellon Scaife." Actually, we accepted foundation grants in a very public accounting and there has never been any evidence substantiating this mendacious charge. McAuliffe goes on to claim that the money was used to pay for articles that claimed President Clinton "ordered the murder of political opponents." Doubtless scores of mainstream media journalists have interviewed McAuliffe about his book. Has any ever asked him who it was we claimed was murdered at Clinton's behest or when our articles appeared?

Most of my appearances this week have been with conservative talk show hosts. If ever I published the twaddle McAuliffe has fabricated, I can tell you I would not get off lightly. The conservative mind is not as tolerant of bosh as McAuliffe's soul mates.