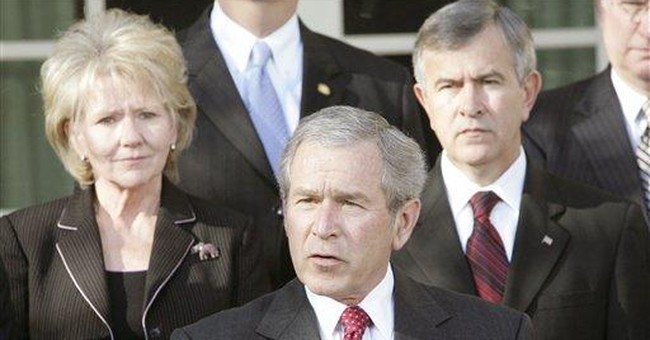 WASHINGTON -- The story here in this great city is that President George W. Bush, leader of the vanquished Republicans, is reaching out to the triumphant Democrats on Capitol Hill. He has had meetings with their leaders. He greeted even their newly elected representatives and senators -- one being Sen. Jim Webb, who blew him off. This kind of friendly politicking has the president's Republican base anxious. Its rank and file fears a sell-out on tax cuts and perhaps on some social policies.

In a widely read opinion piece in The Wall Street Journal this week, the president wrote, "I have been encouraged by the productive meetings I've had with many of the new leaders in Congress from both parties. I am hopeful we can find common ground without compromising our principles." This kind of talk worries the Republican base and Republicans worry more when they see the president writing, "I believe we share many of the same goals for the people we serve -- and with good will … we can find practical ways to advance the American Dream and keep our nation safe."

What the Republican base might find reassurance in is that this is not a new Bush. He came to Washington believing in this sort of collegiality. He thought he experienced it in Texas with a Democratic legislature. He imagined he would experience it in Washington. My guess is that one of his greatest disappointments as president is that there has been so little consensus in Congress and so much partisanship. Business people around the president who aided in his nomination and election in 2000 say he did not accept the bitter partisanship of the Democrats until four years into his presidency.

This makes sense to me. Bush spent most of his adult life as a businessman, not as a politician. For about two decades, as Bush was working the private sector and the likes of Nancy Pelosi and the Clintons were politicking, a growing partisanship was overtaking politics. The Clintons and their cogenerationists were the main reason for it. It was the next evolution of the 1960s generation of pot and protest. Even the president's father, George H.W. Bush, has had trouble recognizing this. That is why he is so friendly with Bill Clinton. He simply does not recognize that Clinton is a total political animal and all this animal wants is to get reelected.

When the president says he believes that he shares "many of the same goals" and "good will" with the Democrats, he is probably right about many Democrats, but not about the dominant forces in the party over the last two or three decades. Their "goal" is for themselves to be endlessly reelected, and they cannot conceive of his "good will." The Clintons, Pelosi and others of their ilk do not really believe in the economic model of Bush and Ronald Reagan, though they have benefited from it. They do not recognize growth economics. What is more they do not recognize the threats to our national security and that force is the ultimate way to defend America. They believe in chatter at the United Nations and in some sort of world consensus that is utterly delusory.

But the president does believe in growth economics and in national security. He is going to give collegiality another try. But when he sees the Democratic leadership foisting on him policies that have already failed, I do not believe that he will accept them. It is, after all, his legacy that they will be tarnishing. More importantly, it is our country that they will be endangering.

Yet I may be overly optimistic. I think this is a resolute president with a grasp of policy, but maybe I am wrong. If so he must surely know this. The Republican base, now so apprehensive about his reaching out to the Democrats, has been the dominant voice in Republican politics for years. It is a major force in the country, if not the major force. It will not go along with what it calls "sell out."