Elizabeth Yore
|
Posted: Sep 28, 2020 12:01 AM
Share   Tweet
The opinions expressed by columnists are their own and do not necessarily represent the views of Townhall.com. 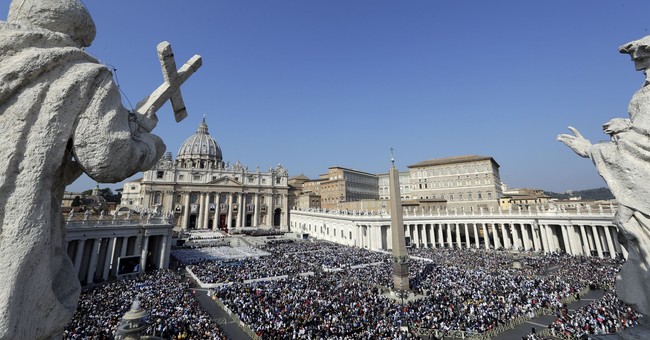 As the ancient Chinese proverb warns, a bad beginning makes for a bad ending. In June of 2013, Pope Francis dispatched to China the infamous Theodore McCarrick to begin deliberations with the Chinese Communist Party (CCP) to normalize relations with the Chinese Catholic Church. Those negotiations resulted in a secret pact signed by the parties on September 22, 2018. The result of this two-year agreement made for a bad ending for all religious believers in China.

Nevertheless, all signs point to a renewal of the disastrous Vatican-China secret deal. Both China and the Vatican indicate that the pact will be renewed in October. Despite unparalleled opposition to the agreement by religious freedom organizations and human rights NGOs, the handwriting is on the Vatican wall that Beijing and Rome will execute a continuation of the two-year deal regarding the appointment of Catholic bishops.

Yet a rare and historic development is emerging over this agreement. In the middle of a fierce reelection campaign, the Trump administration is taking a bold step to weigh in on the Sino-Vatican renewal. This past week, Secretary of State Mike Pompeo penned a powerful and strategic condemnation in First Things. In “China’s Catholics and the Moral Witness of the Church,” Secretary Pompeo catalogs in gruesome detail the ongoing abuses and persecution of religious believers at the hands of the CCP during the agreement’s two-year cycle. Pompeo forcefully argued that “the Chinese people need the Vatican’s moral witness and authority in support of China’s religious believers.”

As America’s chief diplomat, Pompeo noted that the goal of the original agreement was to improve the condition of Catholics in China, yet the opposite occurred at the hands of the Vatican’s partner, the CCP. President Xi Jinping ramped up brutal persecution of Catholic laity, priests, and bishops. Noteworthy is the ongoing persecution of priests who refuse to join the CCP-run “Patriotic Catholic Association.” During the two years of the deal, the CCP has shuttered churches; destroyed religious icons; detained, imprisoned and tortured priests; and demanded absolute allegiance to President Xi by replacing all images of Our Lord with portraits of the Paramount Leader.

“If the CCP manages to bring the Catholic Church and other religious communities to heel,” Secretary Pompeo observed in First Things, “regimes that disdain human rights will be emboldened.” The next day, he tweeted: “Two years ago, the Holy See reached an agreement with the CCP, hoping to help China’s Catholics. Yet the CCP’s abuse of the faithful has only gotten worse. The Vatican endangers its moral authority, should it renew the deal.” As a proponent of international religious freedom, Pompeo is acutely aware of the CCP’s ongoing parade of horrors of religious persecutions of all faiths and knows that CCP is not a reliable partner that will adhere to diplomatic or contractual terms. Clearly, the Trump administration is fed up.

Meanwhile, this summer, China brazenly reneged on its treaty with Britain, which guaranteed that Hong Kong would be secure under its own separate system of laws and freedoms. President Xi unilaterally voided that agreement and imposed draconian regulations on Hong Kong. Shockingly, last July, Pope Francis precipitously removed prepared language from a papal address that criticized Chinese tyranny. A transcript of the speech, which was released to the media beforehand, referred to the need for “societal freedom, and especially religious freedom” in Hong Kong, which ought to be “expressed in full and true liberty, as indeed various international documents provide for it.” Yet, when he delivered the speech, Francis omitted these references. Did he not want to anger his CCP partner?

The Trump administration is signaling that it is deeply troubled by the Vatican’s continued partnership with Beijing, to the detriment of freedom-loving Hong Kongers—many of whom are Catholics. Secretary Pompeo tweeted: “Catholics are among Hong Kong’s strongest voice for human rights, including Martin Lee and [Jimmy Lai]. Beijing has arrested, spied on, and harassed them for the ‘crime’ of promoting freedom. The Vatican should stand with fellow Catholics and the people of Hong Kong.”

Jimmy Lai, the billionaire publisher of the newspaper Apple Daily, is indeed a Catholic. Mr. Lai was arrested on August 12 by the Chinese authorities for violating the new draconian national security law, and his arrest garnered global condemnation. Yet the Vatican remained silent.

With the upcoming renewal of the Vatican-China agreement, Hong Kongers are feeling especially vulnerable by the Vatican’s silence. They may hope for an ally in the United States, at least so long as President Trump remains in office. Mr. Lai thanked Secretary Pompeo “for standing with us.” The powerful Catholic Lai also sternly criticized the Vatican in a tweet: “CCP broke the pact with the Vatican, demolished churches, and persecuted believers. Yet the Vatican still extend [sic] the pact with the regime for two more years. Is the decision made out of naivety, or is it corruption? Or both?” That’s a good question.

Elizabeth Yore is an international child rights attorney. She is a member of the Save the Persecuted Christians and Committee on the Present Danger: China.