A Hand Up, Not a Hand Out 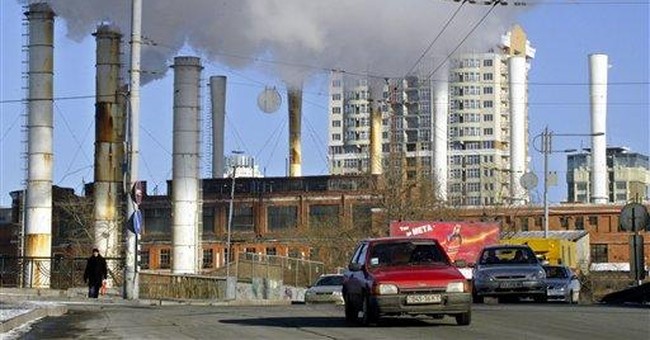 For many of us, the holiday season means gathering with friends and family and celebrating with food and drink. Too much food, in many cases.

But for a few Americans the problem isn’t overeating -- it’s getting enough to eat in the first place. A recent study by the Agriculture Department claimed that more than 16 million U.S. households, a total of some 49.1 million people, experienced “food insecurity” in 2008.

Fortunately, “food insecurity” isn’t as dire as it sounds. USA Today made the mistake of reporting that the study found “1 in 6 went hungry in America in 2008.” That’s wrong. Most “food insecure” households merely reported they had “worried” they might run out of food, or had eaten cheaper, unbalanced meals at some point in the last year. With 15 million Americans unemployed, that response isn’t too surprising. When asked specifically about “hunger,” about 3 percent of the population, or 10 million persons, reported they’d been hungry because they didn’t have enough money for food at least one day during the prior year

Still, it’s a shame that anyone is hungry in the United States. The question is: How can we address hunger effectively? Some say we need more government spending.

Do we? Last year, the federal and state governments spent $714 billion on means-tested welfare or aid to the poor. It’s a sum that dwarfs the $30 billion price tag for the Afghanistan surge. More than a third of it went for cash, food and housing aid.

The federal government has invested trillions since President Lyndon Johnson declared “war” on poverty. And there’s no end in sight.

There are better ways to approach this. Consider Oliver’s Kitchen, part of the Chicago Anti-Hunger Federation.

This 12-week course trains underprivileged students to enter the food service industry. It may seem counterintuitive to teach hungry people how to work with food, but the restaurant business is a great place to begin a career. Entry-level jobs are available, and there’s plenty of opportunity for advancement for people willing to work hard and learn well.

As the program’s Web site explains, “Oliver’s Kitchen trains its students in up-scale food preparation, pantry skills, kitchen safety, nutrition, sanitation and much more.” These are skills that are convertible -- useful at upscale downtown restaurants and at the local fast-food joint.

Plus, the program is teaching people about the benefits of good nutrition. One problem in the U.S. is that, all too often, the food that’s most plentiful is also the least healthy. Fast food and prepared meals tend to be loaded with sugar and salt, but they cost far less than healthier fresh fruit and vegetables.

That doesn’t mean everyone who goes through the program will make smart food choices all the time; in a free market, people sometimes opt for the unhealthy choice. But as educated food preparers, Oliver’s Kitchen grads are certainly more likely to make smart food choices, providing health benefits for themselves and their families for years to come.

Liberals and conservatives ought to be able to agree we can never spend enough to completely eliminate poverty. The poor, after all, will always be with us.

“On average, welfare spending amounts to around $7,000 per year for each individual who is poor or who has an income below 200 percent of the poverty level,” Heritage Foundation poverty expert Robert Rector reported in a recent paper. “This comes to $28,000 per year for each lower-income family of four.”

That level of spending is unsustainable. And, as the studies of hunger show, it’s also ineffective. Yet, Rector writes, the Obama administration aims to spend another $10.3 trillion on welfare programs.

The better way to deal with hunger would be to give the poor a hand up, not a hand out. Programs such as Oliver’s Kitchen have the right recipe. We need more of them.