Afghanistan: No Time to Cut and Run 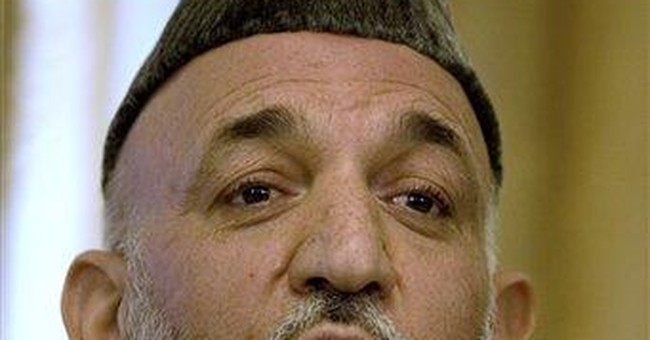 Students of history know it’s never a good policy to bet against the United States military. American warriors have a knack for turning the tide toward victory just when things look bleakest.

Consider Pearl Harbor. A devastating sneak attack damaged 21 Navy ships and killed some 2,400 Americans. Yet within six months, our crippled Navy was able to prevail at the Battle of Midway, sinking four Japanese carriers and beginning a trans-Pacific push to V-J Day.

More recently, many had given up on our chances for success in Iraq. In April of 2007, just three months after Bush ordered a change of strategy in Iraq, Senate Majority Leader Harry Reid declared, “This war is lost and the surge is not accomplishing anything.” Yet over the next year, American warriors executed Gen. David Petraeus’ strategy, restored order and began to redeploy out of Iraq ahead of schedule. That war isn’t “won” yet, of course. But it isn’t lost either -- and it won’t be.

These days the focus is on Afghanistan.

Conservative columnist George Will recently declared American forces had accomplished all they could there. He urged that we withdraw over the horizon, keeping troops out of harm’s way and using air strikes to maintain order as necessary.

The temptation is understandable. Americans have been fighting in Afghanistan since 2001, and everyone looks forward to the day we can “bring the boys home.”

However, the war cannot be effectively waged merely with air power, predator drones and Special Forces. Precise intelligence is needed to use smart bombs effectively. Yet few Afghans would risk their lives to provide such intelligence unless they can be sure American forces will be available to protect them.

Pulling troops out of Afghanistan before the situation is stable there would allow the Taliban -- which we ousted from power eight years ago -- to reassert its influence not only in Afghanistan but also next door in nuclear-armed Pakistan, where the Pakistani Taliban is influential.

The fact is that success in Afghanistan, like success in Iraq before it, will require firm and patient presidential leadership. President Obama recently received an assessment of the war from Gen. Stanley McChrystal, the U.S. commander in Afghanistan and a proponent of the sort of counterinsurgency plan that his current boss, Gen. Petraeus, employed in Iraq.

Obama should give his military commanders the best chance for success by approving their requests for additional troops and resources. That doesn’t mean feeding forces in slowly, though. An incremental approach that defers any requested troop reinforcements could jeopardize the success of the strategy.

Over the last several years, with the focus on Iraq, the U.S. has tried a “small footprint” strategy aimed at limiting the troops on the ground and focusing solely on al Qaeda rather than the Taliban-led insurgent coalition. This strategy has failed, allowing the Taliban to regroup and rearm.

It’s time for a more robust strategy to defeat the Taliban, even though doing so will be protracted, expensive and grueling. Our warriors and our Afghan allies can prevail, especially since the Taliban remains extremely unpopular, and most Afghans want to see the U.S. succeed. When we do, it will send a powerful message to America’s friends and enemies alike.

But with proper leadership and support for our troops, today’s wars will end, as have so many others, with the United States victorious. This is no time to bet against America’s military.