School Choice and a Lesson in Hypocrisy 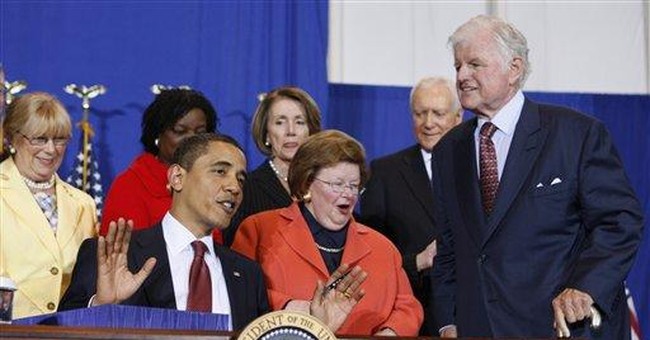 Even for those of us who live and breathe politics, the workings of the U.S. Senate are often difficult to understand.

It takes only 51 votes to pass a bill, for example -- but first, 60 senators must agree to grant “cloture” to end the debate. And because of odd Senate policies, when John Kerry said a few years ago, “I actually did vote for the $87 billion before I voted against it,” that bizarre statement was accurate.

Still, voters ought to demand that senators explain a more serious instance of this confusion. Namely, why do so many lawmakers vote against something that, in their personal lives, they favor -- school choice?

A Heritage Foundation survey, updated every two years, recently found that 44 percent of senators and 36 percent of House members have sent a child to private school. That’s 38 percent of lawmakers using private schools at some point. Nationwide only a third of that -- roughly 11 percent -- of students attend private schools.

Yet when it comes to other people’s children, the Senate refuses to extend the same choice.

Consider the popular D.C. Opportunity Scholarship Program. It provides federal funding to allow some 1,700 children to escape the failing District of Columbia school system and attend the school of their choice.

Last month lawmakers passed a spending bill design to fund our federal government for the rest of the year. One provision in this bill requires Congress to explicitly reauthorize the D.C. scholarships, instead of simply allowing them to continue automatically. That means that if lawmakers don’t act, the program will end in June 2010.

This makes little sense, especially since the program is working. A federal study shows scholarship students have higher reading-test scores than their peers in public school. Sen. John Ensign, R-Nev., offered an amendment to remove the reauthorization requirement. It was voted down 58-39. Yet the Heritage survey shows the amendment would have passed if senators who sent their own children to private school had voted for it.

Sen. Richard Durbin, D-Ill., voted against it, despite having used private schools (and attended them himself). He fumed about the high cost of the program, even though -- at about $15 million -- it’s little more than a rounding error in our $3.5 trillion federal budget.

“I have no prejudice against private education,” Durbin declared on the Senate floor. “If I entrusted my children to it, I certainly believe in it. But the question always came up in my mind: Who should pay for it? We were prepared as a family to pay for it. It was an extra sacrifice we were prepared to bear.”

That, of course, is exactly the point. The Durbin family, like most middle- and upper-class American families, already enjoys school choice. D.C.-area families that earn enough can always more to suburban Montgomery County, Maryland or Fairfax County, Virginia, where the public-school systems are among the best in the country.

Yes, the cost of living is higher than in D.C. itself. And sure, it makes for a longer commute for working parents. But it’s a sacrifice most are willing to make and an option they can afford. That’s especially true for federal lawmakers, whose six-figure salaries ($169,300 on average) put them in the top 5 percent of American wage earners.

Secretary of Education Arne Duncan knows this. “My family has given up so much so that I could have the opportunity to serve,” he told Science magazine. They decided to live in Arlington, Va. because, “I didn’t want to try to save the country’s children and our educational system and jeopardize my own children’s education.”

Saving the country’s children is indeed a big job -- but one that should begin with 1,700 kids in D.C. Lawmakers should make sure these poor families have the same educational advantages their own children so often do.