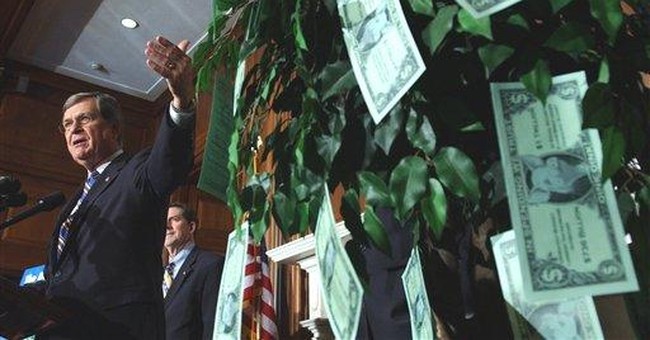 "If something's free, I'll take two," a mentor of mine once said. His point was that people don't value things they don't pay for, especially things the government "gives" them.

And it's not only individuals who harbor this attitude. State governments do, too.

Take Medicaid. Many states find themselves dragged down by the program's costs because they irresponsibly promised gold-plated benefits to as many people as possible, knowing that Washington would pick up part of the bill.

This dreary history may soon repeat itself through another federal health venture, the State Children's Health Insurance Programs.

In 1997, Washington agreed to spend $40 billion over 10 years to help states provide health-care coverage to low-income, uninsured children. However, to keep SCHIP from becoming a boondoggle like Medicaid, it was set up as a block-grant program. States would receive a fixed amount each year, rather than an open-ended promise to spend "whatever it takes."

The program seemed to work well enough in its early years. However, that was only because some states didn't spend all the money they'd been allotted, and that money was made available to fund programs in states that went over budget. In 2001, for example, more than $2 billion was reallocated from low-spending states to higher-spending ones.

But states see no reason they ought to leave federal funding on the table, so they found ways to spend it. By last year, only $173 million was left over for redistribution. That's partially because many states started making it easier to qualify for SCHIP. The program was intended to help only low-income cdren, those whose family income is less than double the federal poverty line. That's about $40,000 for a family of four.

Seven states, however, provide benefits to families earning much more. Four of them (Maryland, Massachusetts, Missouri and New Jersey) extend SCHIP coverage to three times the poverty level ($60,000 for a family of four). If these expansions continue, we could soon be at the point where a family is simultaneously eligible for SCHIP and yet subject to the Alternative Minimum Tax. That would be ironic because the AMT was created to make sure the wealthy paid their "fair share" of income taxes.

Meanwhile five states (Illinois, Minnesota, New Jersey, Rhode Island and Wisconsin) cover parents and even childless adults. This gets expensive -- and quickly. In fact, the federal General Accountability Office says, in the 14 states that went over budget in 2005, more than half of the SCHIP recipients were adults. This in a program aimed at helping "the children."

Not surprisingly, Washington has been bailing out states that spend too much. Congress spent $283 million to paper over last year's "shortfall," and will almost certainly have to spend more this year. The House already voted to add $750 million in "emergency" SCHIP funds and the Senate will more than likely follow suit.

This needs to change. It's time to bring SCHIP back into line and keep it from turning into another entitlement funded on taxpayers' backs.

Congress created the program to help poor children, not to give states another excuse to shower "free" benefits on middle-class families. By bailing out those states that spend too much, Washington simply encourages more extravagant behavior.

States are aware how much they'll get in SCHIP funding each year, and they should plan to spend only that much or less. If they want to expand their programs and end up going over budget, they should be prepared to pick up the bill, not pass it on to the rest of us.