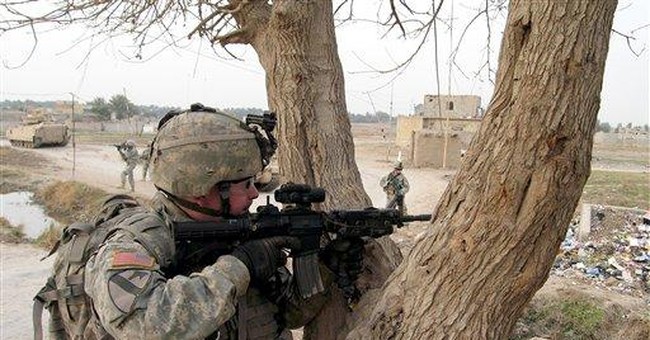 Osama bin Laden and Ronald Reagan wouldn't have agreed on much. But both men understood one thing: Military weakness invites trouble.

There's rarely a downside to being strong. But threats quickly emerge when a country is seen as too weak.

Politicians, of course, are quick to say they're for a strong defense. But not all of them are willing to pay for it. After all, maintaining military strength isn't cheap. During the Cold War, for example, the United States ramped up spending to counter the Soviet Union even as we fought in Vietnam. In 1968, we spent 9.4 percent of our gross domestic product on defense.

But Washington allowed defense spending to slide throughout the 1970s, and we paid a heavy price. By the end of the Carter administration, our country had a hollow military force. It had degenerated into what military analyst James Carafano calls "an OK Army."

"There was no money to modernize weapons and equipment," Carafano told Congress two years ago. "Even if they had the people to fill the ranks, there wasn't enough money to pay for training and maintenance. It was all OK -- as long as we didn't actually have to fight anybody."

Ronald Reagan highlighted the link between spending and preparedness once again. He boosted defense spending throughout the 1980s, and the country enjoyed a swift payback. Soviet leader Mikhail Gorbachev realized his country couldn't compete militarily, and the Soviet Union, which many "experts" had insisted would last for generations, collapsed in 1991.

Thus history shows that if the United States wants to remain powerful, our leaders must make the necessary financial investments. However, we didn't do that throughout the 1990s.

Lawmakers eagerly cashed a "peace dividend." They slashed military spending, which sunk to just 3 percent of GDP by 1999. Washington spent less and got less. The army dropped from 18 divisions to 10. The navy decommissioned hundreds of ships, shrinking from 568 to today's 275.

But if we've learned one thing in recent years, it's that we haven't kept a large enough military. We've had to scramble to maintain deployments in Afghanistan and Iraq, for example, and our perceived weakness has emboldened enemies such as Iran and North Korea and potential foes like China. We need to rededicate ourselves to a strong national defense.

How? Let's adopt a "4 Percent for Freedom" plan. That means our country should never spend less than 4 percent of GDP on defense. Today, we spend almost that amount -- 3.9 percent -- on our core defense budget, including non-Department of Defense spending on national security. It's not enough, though.

This year's budget begins to recognize that. President Bush wants to add six brigade combat teams to the army, and he's set aside the money to pay for them. That's the first step on a long journey, one we'll need leaders in both parties to support in years to come, as Bush leaves office and a new administration takes over.

The preamble to our Constitution states that the federal government must "provide for the common defense, promote the general welfare and secure the blessings of liberty to ourselves and our posterity."

We can argue about whether federal entitlement programs really "promote the general welfare." But there can be no doubt we need a strong military to provide the "common defense."

Spending at least 4 percent of GDP to fund our defense is the least we can do to make sure our country remains safe and free for generations to come.