On the same page 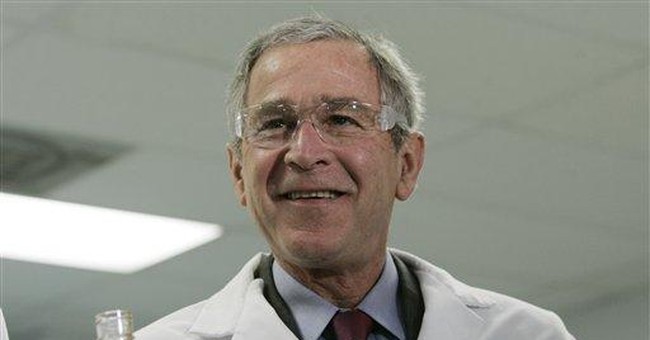 In the mid-1950s, French educator Jacques Barzun said, "Whoever wants to know the heart and mind of America had better learn baseball." He correctly recognized the sport as a cultural touchstone that united us.

Half a century later, finding a tie that binds us as a nation is a little tougher. So let's go back to basics. How about the English language?

This probably seems like common sense. After all, English is already universal. It's not only spoken by an overwhelming number of Americans, it's understood by hundreds of millions worldwide. It's the language of aviation, and thus international commerce, as well as the default language of the Internet. Everyone, from stock traders in New York to software designers in Mumbai, uses English to conduct business.

But instead of using the power of our native tongue to unite the country, our official policy has been to balkanize the United States.

Executive Order 13166, issued by Bill Clinton in the summer before he left office, mandates that any group that receives any federal funding must provide its services in any foreign language that may be spoken by someone likely to receive those services. So instead of having one official language, in practice we have dozens.

Predictably, this leads to problems. As David Leahy, the election supervisor for Miami-Dade County, told PBS in 2001, "We print every ballot in Spanish, English and some ballots in Creole." So much for the idea that an election should promote national unity. No wonder we sometimes have problems figuring out who won.

Enough. It's time for a new approach, one that unites all Americans instead of dividing them -- and one that stops putting the children of immigrants at an economic disadvantage. English should be our official language. This can, and in fact must, start in our schools. And we've already taken an important step.

When President Bush signed "No Child Left Behind," he changed the way non-English speaking students were taught. Before 2002, the federal government simply paid for services and projects carried out by states and local school districts. That sort of system made it difficult to track results.

Now, under Title III of NCLB, Washington provides grants to states. In return, it demands each state establish "comprehensive, integrated statewide systems to meet the needs of all limited English proficient students." That's a good start, because by giving grants to states instead of simply picking up the tab, the federal government both encourages them to be innovative and requires they show results.

Still, Washington should go even further. For example, 40 states still use Title III funds to support bilingual-instructional programs, where students are taught mostly (or exclusively) in their native tongue. New York, for example, has four bilingual programs, while Florida and California each have two. That's a mistake.

After all, as a 1998 report from the Lexington Institute showed, students in bilingual education classes learn English more slowly than students in regular classrooms do. That means they learn English later in life, which leaves them struggling to keep up with their peers.

Federal lawmakers should change grant program guidelines to eliminate bilingual education entirely. Every student who's learning English as a second language should do so in an immersion program. That'll help them learn English more quickly, so they can make the move to a standard classroom.

Immersion works. That's why parents of English-speaking students now enroll their elementary-age children in immersion programs for other languages. In Fairfax County, Virginia, for example, first graders can study Spanish, French, German or Japanese through immersion programs. We ought to extend benefits of similar programs to immigrant children who need to learn English.

A primary job of the federal government is to unify Americans. Besides being our native tongue, English is the language of commerce worldwide. Every student should be able to speak it fluently. That's the only way to ensure that no child gets left behind.