An Agenda Republicans and Democrats Should Advance in Congress 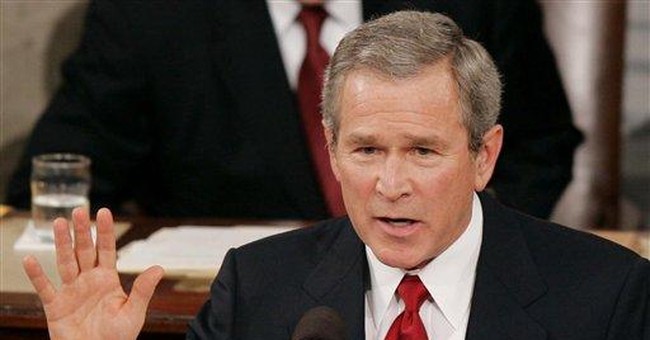 When historians sit down to write about the recently departed 109th Congress, one fact is likely to stand out: The supposedly conservative majority spent as if it was a liberal majority.

“The greatest scandal in Washington, D.C., is runaway federal spending,” Rep. Mike Pence said after the 2006 election. In recent years, he notes, the Republican majority “voted to expand the federal government’s role in education, [added new] entitlements and pursued spending policies that created deficits and national debt.” In essence, the outgoing Congress tried to buy our votes with our own money!

It adds up fast. Federal spending in fiscal year 2006 increased by 7.4%, and is now 42% above what it was when President Bush took office. Discretionary federal spending -- money the government chooses to spend, as opposed to what it must spend on programs such as Social Security -- has jumped 57% since 2001.

Over the years, federal lawmakers have found new ways to insert themselves into what should be local issues. Since President Bush took office, lawmakers have larded spending bills with more than 35,000 earmarks, including such wasteful and parochial measures as $223 million for the infamous Alaskan “Bridge to Nowhere” and $50 million for an indoor rainforest in Iowa.

Earmarking is often nothing more than an attempt by lawmakers to show folks that they’re “bringing home the bacon.” Conservatives should focus on the lesson of this election: This sort of federal spending is wrong. It doesn’t work, and it should be stopped.

The other side of the spending coin is entitlements. Medicare, Medicaid and Social Security are on a path to bankrupt our country. Medicare spending alone is projected to leap $112 billion from 2005 through 2007, to nearly half a trillion dollars. There’s a crisis looming.

Instead of addressing these problems, our lawmakers have only made them worse. In 2003, for instance, they passed the Medicare prescription-drug benefit, adding trillions of dollars in costs to an already failing program. It was the largest entitlement program passed since the Great Society of the 1960s, and many saw it as nothing more than an attempt by lawmakers to buy senior citizen’s votes by giving them “inexpensive” drugs (to be paid for by their children and grandchildren’s taxes).

The buy-off failed. Its main author, Nancy Johnson, was ousted in Connecticut, while key supporter Clay Shaw lost his Florida seat after his opponent made the costly benefit a campaign issue.

Today, as President Bush prepares to outline his agenda in the State of the Union, the Heritage Foundation’s Mike Franc will lay out a positive agenda that Republicans and Democrats alike should be able to agree on. Franc is our vice president for government relations, and he’s been through transitions before; he was at Heritage when the GOP took the House in 1994, and later served as director of communications for Majority Leader Richard Armey.

He’ll explain what lawmakers can do to improve our country’s fiscal health, boost our competitiveness overseas, protect our national security and strengthen our energy supplies and security.

The American people certainly voted for change in 2006. And the lesson that politicians should learn from this election is that they can’t buy our support with more spending. Instead, they should focus on creating a government that is smaller and more responsible with our money. Now, read how they can do that.