When Terrorism Hits You Are On Your Own 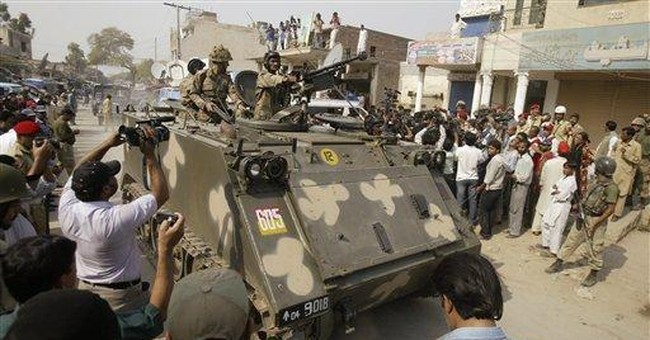 As the farcical and almost-tragic facts about the Nigerian-Muslim terror suspect play out, one thing has become crystal clear: Your government can't protect you from a terrorist attack. Worse, when the next one hits - and only delusional elected officials would deny this certainty - you are on your own.

Although a clearly incompetent Homeland Security Secretary Janet Napolitano saying "One thing I'd like to point out is that the system worked" (after the suspect paid cash for his ticket, had no check-in luggage, smuggled a bomb onto Northwest Airlines Flight 253 and then proceeded to try and detonate it) may be amusing to some, it was deadly serious to the almost 300 passengers and crew whose lives were spared only because the explosive malfunctioned.

As Republican Rep. Peter King of New York said, "It's not reassuring when the secretary of Homeland Security says the system worked … it failed in every respect." Even President Barack Obama has belatedly agreed.

There is zero surprise in any of this. This latest breach of our post-Sept. 11 "security" only serves to reinforce what intelligence and Pentagon officials have been telling me privately for years: No matter how well the government says you are protected, the fact is that you and your family are on your own and will be on your own when we are next hit with a large-scale terrorist attack. Plain common sense tells all of us that our nation is too big, is too open, has too many targets of opportunity, and has a security system too suicidally weakened by political correctness to fully protect us from fanatical terrorists willing to kill themselves in the hope of slaughtering hundreds or thousands of innocent human beings.

If we take a deep breath and give this a moment's thought, we all know it to be true. That said, how many of us are prepared for this horrific reality? We have become dangerously complacent to the growing threat of terrorism. While we would all like to bury our heads in the sand and pretend it's not happening, radicalized fanatics are working feverishly, 24-7-365, to develop or acquire chemical, biological or nuclear weapons of mass destruction. The dream target of those weapons being the United States of America.

In spite of this pending menace, it's become passé or even embarrassing to sit down with family members and go over a few of the basics - basics that many in earthquake country cover. Such as: Do you have a week's supply of water and food along with batteries, a radio, flashlights, candles, cash and other survival gear at home, as well as a smaller supply in your vehicle and office? Do you and your family have an agreed-upon place to meet should/when the unthinkable happens? Doubtful.

Remember, when the next large attack happens, you are on your own. Your government won't be there because its members will be either too busy covering their butts, protecting their particular partisan and useless political party, looking after themselves and their family members, or just totally confused and not sure what just happened or who to speak with. Cell phones and land lines may be overloaded for days or could completely fail. As will other communication outlets, banks, water supplies, power generating facilities, gas stations and the like.

Don't believe any of this or think it's an exaggeration? Fine. That's up to you. We are all responsible for our actions or lack thereof.

The experts I speak with tell me point-blank that our nation and the world are not prepared - or refuse - to confront radical Islam. That is what the terrorists are counting on as they prepare for their next strike.