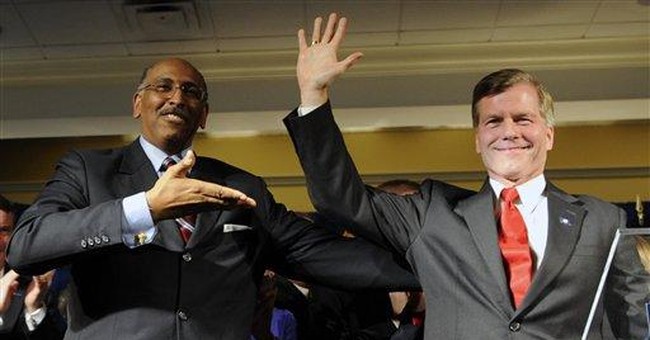 WASHINGTON -- Bob McDonnell's decisive victory is even more impressive if one stops to acknowledge that it came in the face of incredibly daunting opposition, misleading and low-brow campaign commercials, and a "news" organization which often advocates for left-of-center candidates and causes. To win the election, McDonnell had to defeat not only the Deeds campaign, but the DNC, the White House, and The Washington Post.

Lest we forget, this is not the first time this "take no prisoners" strategy was employed by the Democrats and The Washington Post against a Virginia Republican. In fact, three years ago, not only was the strategy wildly successful, but a case can be made that it also cleared the way for Barack Obama's ascension into the White House. All because of one word. One ugly and offensive word spoken by a candidate who should have known better.

While the narrative of Barack Obama's election has become the stuff of liberal legend, it purposely leaves out numerous inconvenient facts -- one being that in John McCain, he was blessed with an out-of-touch and over-matched GOP opponent.

But for that one ugly and offensive word, it is almost certain that McCain would never have gotten the GOP nomination. Instead, the early betting was that the title would have gone to the more conservative and base-friendly George Allen.

Remember him? The media and far-left "historians" would rather that you did not. Back in 2006, while running for re-election, riding high in every poll and considered the front-runner for the GOP nomination, Sen. George Allen of Virginia damaged not only his chance for re-election to the U.S. Senate, but with it, his chance to be the GOP nominee for president.

Allen did this because a young campaign worker for his opponent, Jim Webb, finally got under his skin. This young man of Indian-American descent would show up at Allen events and videotape Allen in the hopes of recording a campaign blooper. Unfortunately for Allen, he finally took the bait and went after the young Webb volunteer during a speech. He pointed at him and said, "This fellow here, over here with the yellow shirt, macaca, or whatever his name is, he's with my opponent . . . let's give a welcome to macaca here. Welcome to America and the real world of Virginia."

Game, set, and match. Not only because Allen spoke what was proven to be a racial slur, but because the left-of-center Washington Post decided to use that one word to destroy the re-election chances of Allen and ultimately take him out of the running for the 2008 presidential election.

The Washington Post did this -- and Carl M. Cannon, the excellent columnist for the Politics Daily site, outlines this in great detail in a recent column -- by publishing, in the 10 weeks leading up to the election, approximately 115 articles, columns, and editorials attacking Allen over his use of the word "macaca" -- 15 of them, as Cannon points out, on the front page of the paper. Can you say "overkill"?

In the end, The Washington Post succeeded in its quest to take down a candidate who, out of frustration, said something beyond the pale. In the process, that one word and that one newspaper may have changed the course of history.

Flash ahead three years and The Washington Post -- in tandem with the White House and DNC -- tried to replicate those tactics against McDonnell. This time they failed.

The thousands of words, millions of dollars, and vicious ads thrown at McDonnell raise the obvious question: What had The Washington Post, the White House, and the DNC so scared? For sure, they feared that if McDonnell won, it would be seen by many Americans as a rebuke of the policies of Obama and the far left. But what else? My theory is that they went after McDonnell in such an over-the-top way because he is seen not only as a threat to the Obama agenda, but quite possibly to Obama himself in 2012.

Think about it. The GOP bench for 2012 is somewhat thin and, for the moment, splintered. Imagine a newly minted governor from a Southern state who brings a résumé to the game like few before him. In McDonnell, the GOP would have a governor who served 21 years in the U.S. Army, was a prosecutor, served 14 years in the Virginia House of Delegates, was an attorney general, had a very successful private sector career, and even has a daughter who is an Iraq war veteran.

If McDonnell puts the interests of his state and nation before his own and those of his party, he may have a productive governorship and an interesting future. If not, it's "We the People" who once again pay the ultimate price.