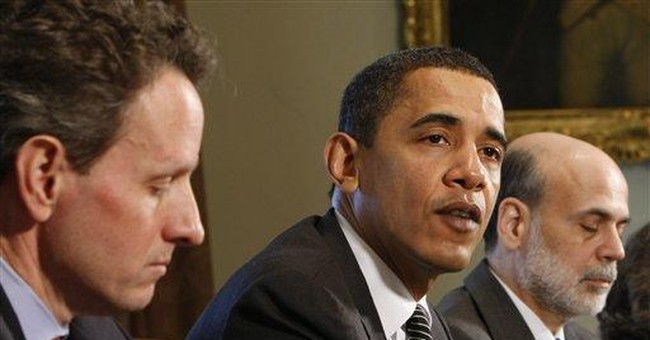 As we suffer through the worst economic crisis of our lifetimes, it seems that aside from constantly vilifying the banks, CEO’s, and “corporate greed,” President Barack Obama and most of the mainstream media that has fallen in love with him aren’t really interested in accountability or figuring out exactly how we now find ourselves in this untenable position.

Curious, to say the least.

For months, our new president has talked about the need for transparency and bipartisanship. Except on this subject, there is very little transparency. Coupled with that, you have major media outlets like NBC News, CBS News, ABC News, The New York Times, The Washington Post, and The Los Angeles Times -- all powerful organizations who pride themselves on their investigative abilities -- who basically refuse to have their reporters look into what role Democrats like Rep. Barney Frank, D-MA, president and former White House economics policy makers Larry Summers and Robert Rubin, and others played in the economic meltdown.

By way of evidence, one need look no further than Frank’s appearance on the March 16th edition of “The Today Show” on NBC where Meredith Vieira helped the Massachusetts Democrat bash AIG, while never once asking him about his role in blocking the needed reforms of Fannie Mae and Freddie Mac.

To be sure, you will hear our new president and his supporters in the media blame former President George W. Bush, Republicans in general, and, of course, those evil bankers for a crisis that has wiped out trillions in savings and devastated the lives of millions of Americans.

As a conservative, I agree that the former president, a number of Republicans, and some bankers played a real role in this financial train wreck. It would be delusional not to say so. But, as an American, I find it very troubling that Obama, Democratic congressional leaders, and their allies in the media find no fault with Democrats. None. Not only is such conduct irresponsible, it’s dangerous.

Why is it that, with their budgets of millions of dollars, the big mainstream media outlets refuse to investigate this story? Is this not the biggest economic story in the history of these media outlets? Don’t they have an obligation as journalists to follow each and every fact to its natural conclusion? Isn’t that supposedly their only reason for being?

I have friends at all of these media outlets. I know there are still honest reporters and producers out there. I just don’t understand their silence or how they can allow their ethics, character and professional responsibilities to be tarnished in this blatant and destructive manner.

While unconscionable and counter to the oaths they took as elected officials, it’s unfortunately quite easy to understand why the president and the likes of House Speaker Nancy Pelosi, D-C, and Senate Majority Leader Harry Reid, D-NV, would blame everyone but fellow Democrats.

Pelosi and Reid, like House Republican leader Rep. John Boehner, R-OH, and Senate Minority Leader Mitch McConnell, R-KY, and others, have a tendency to put party before country when it suits them. The welfare of the American people is often an after-thought in relation to self preservation or partisan politics.

The media, on the other hand, has only one responsibility. To get to the truth. But to carry out that simple and critically important assignment, it must operate from a platform of honesty and objectivity, qualities that long since stopped supporting the collective weight of the left-leaning mainstream media.

For those mainstream journalists who still believe in objectivity and reporting the unvarnished and unbiased truth, I have an assignment for you. Other than Bush, evil bankers, and assorted Republicans in Congress, tell us which Democrats also played a substantial role in this nightmare.

Which Democrats helped to create and unleash this economic virus upon our nation and the world? Surely the facts, easy traceable evidence, and commonsense would say there are a few. So, who exactly?

Once you carry out your duty as unbiased journalists, kindly tell us how these Democrats -- along with the previous administration, congressional Republicans, and various bankers -- did what they did.

What improper favors were granted? Which major donors were helped? Why were sub-prime borrowers with no hope of paying their mortgages, being forced upon the banks? What lessons need to be learned?

Strange. We have the most captivating, important and potentially calamitous economic story of our lifetimes and the major media outlets refuse to investigate it fully? Other than a blind and unprincipled loyalty to this president and his party, I’m at a loss for an explanation.