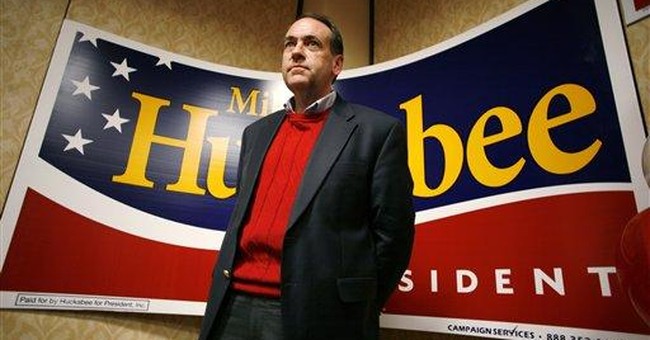 It appears to many, that New Year’s Eve was the day that the last wobbling wheel of the Huckabee bandwagon, spun off before the “inevitable” crash of his hypocritical and mean spirited campaign.

For it was on the last day of 2007, that this “man of God” decided to hold a news conference to unveil a nasty and negative ad aimed at former Governor Mitt Romney. An unsavory ad that was devised and filmed by Huckabee in the midst of the Christmas holiday.

But wait. As Huckabee got to the podium to announce the ad campaign, he had a Machiavellian change of heart. “No,” he decided basically on the spot. The ad would not run. “Enough was enough.”

Clearly, the “enough was enough” uttered by Huckabee really meant enough of spending his dwindling campaign resources to do his own dirty work. Like Vladimir Lenin in the past, it was Huckabee’s intent to rely on “useful idiots” in the media to flood the nation with his disingenuous and insulting message. Unfortunately for Huckabee, the fifty or so national and local reporters gathered for his news conference, literally laughed in his face at his desperate and transparent attempt to use them.

Worse than witnessing what the Associated Press deemed a “bizarre news conference,” many in the media began to speculate as to how little respect Huckabee had for the voters in Iowa and New Hampshire. Does he think so little of them that he does not believe they are intelligent enough to figure out that he is gleefully perfecting the art of slander while consistently denying the same to their face? As one major news organization just asked, does Huckabee simply think of these valued voters as nothing more than “rubes.” Maybe Fred Barnes of The Weekly Standard and Fox News said it best when he offered, “Huckabee is in a real campaign and he can’t handle it.”

If Huckabee can’t handle the pressures of a presidential campaign, how can he deal with an increasingly chaotic and dangerous world? As a news organization just pointed out, “He hasn’t helped himself with a series of foreign policy gaffes.”

For instance, why did he offer “our apologies” for the assassination of former Pakistani Prime Minister Benazir Bhutto? Aside from that strange response, why does he amateurishly talk of sending U.S. forces into Pakistan to hunt down one man? A plan that would further risk destabilizing an already fragile Pakistani government and produce an outcome that could allow the nuclear weapons of that nation to fall into the hands of Islamic terrorists. To all of this, a rival candidate said that Huckabee’s comments “are not consistent with someone who understands the nature of the world we live in.”

Beyond the calculated and deceitful Huckabee news conference and foreign policy gaffes, what are we to make of his sudden allegiance with Senator John McCain? He now calls his opponent for the nomination, a “friend” and a “hero.” McCain now calls Huckabee a “good man.” Will dogs and cats next unite to sing the praises of both men?

Clearly, the mutual admiration society of Huckabee and McCain has nothing to do with the feelings of each toward the other, but rather, their growing panic with regard to the Romney campaign. While Romney has run what the media has called “conventional contrast ads” against the positions and records of both candidates, McCain and Huckabee have chosen the low road in response. Each man decided to launch personal attacks against Romney and his very character.

McCain’s strategy, was to film an ad that quotes a personal attack against Romney by the ultra-liberal Concord Monitor. When called on it by one of the Sunday talk shows, he cravenly said that HE was not saying it, the paper was saying it. Okay. If that’s his insincere defense, then in John McCain, has the Concord Monitor found its own “useful idiot?”

Beyond the Concord Monitor, why has the equally liberal Boston Globe endorsed McCain? Why has the National Education Association of New Hampshire endorsed Mike Huckabee? Why? Other than liking their amnesty and education plans for illegal aliens, what is it about these two candidates that these liberal organizations and media outlets love?

Finally, why at the 11th hour, have the Huckabee and McCain campaigns adopted the reprehensible tactics of the Clinton – past and present – smear machines? In doing so, they deliberately turn a deaf ear to Republicans and conservatives who reject this type of behavior offered in lieu of substance