Let's Face It -- Almost No One Supports Our Troops 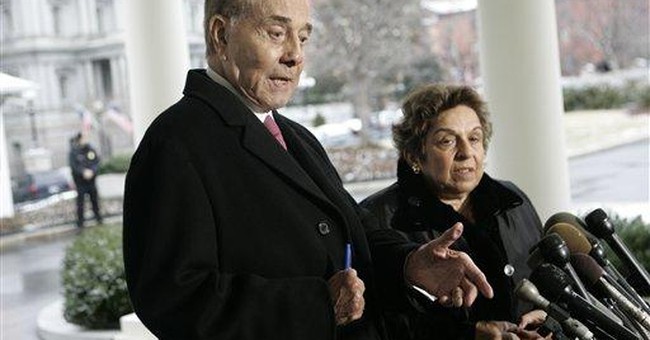 Who in the United States really supports our troops? If truth be told, basically nobody.

My former boss, Sen. Bob Dole — who was grievously wounded in combat during World War II and then spent the next three years of his life in various hospitals trying to survive and recover from his wounds — says this generation of soldiers, not his, is truly "The Greatest Generation." Over the course of the last few years, he has quietly visited with hundreds of wounded soldiers and been brought to tears, not only by their sacrifice, but also by their determination to rejoin their fellow soldiers back in Iraq and Afghanistan. While Bob Dole, who clearly supports our troops, may think of them as "The Greatest Generation," not many of us agree with his very accurate assessment. Out of a nation of now 300 million people, who really cares about the young men and women we send into harm's way?

Let's see. Those on active duty obviously care, their families care, veterans care, a small number in the media care, some states like Texas care more than others, and a minute amount of the national population actually cares. But for the vast majority of the rest America, the young men and women who serve on the front lines and protect us from evil are all but invisible. They don't exist in our lives, they occupy no space in our minds, and their sacrifice goes unnoticed and unappreciated.

Many on the far left think those in uniform are fools, puppets or even war criminals. Witness the already controversial ad run in the New York Times last week by MoveOn.org that intimates Gen. David Petraeus — a nonpartisan professional soldier of impeccable reputation — may in fact be "General Betray Us." Is that their "support" for our troops?

Politicians who speak for the far left often say, "I support the troops but not the war." Proudly, liberal Democratic presidential candidate Dennis Kucinich, D-Ohio, often parrots that exact phrase. This is the same man who, while in the terrorist-sponsoring state of Syria, just denounced the Iraq war on Syrian television and praised Syrian President Bashar al-Assad— a dictator who, according to our intelligence agencies, allows and encourages Islamists to cross his border into Iraq to kill U.S. soldiers. Is that "support" as defined by Kucinich?

What about wealthy liberals who can't fathom why U.S. soldiers would accelerate their training for a $20,000 bonus? As they ridicule these soldiers for selling their souls for a pittance, do they understand what $20,000 represents to the average American? Is this the "support" and understanding they are willing to grant our soldiers?

What about the far right? What about those who purport to speak for my party? Paul Wolfowitz, Douglas Feith and Steve Cambone were three high-level political appointees in the Rumsfeld Pentagon who were instrumental in planning the Iraq war and wildly underestimating the response. Do they "support" our troops? What price do these, never been in the military, ivory tower academics pay for their gross miscalculations?

As they move forward with their careers and makes hundreds of thousands to millions of dollars, what support do they offer to the families of the almost 4,000 killed and 30,000 wounded?

What about the conservative politicians and pundits who did everything they could to get out of service in Vietnam but now stand as the loudest cheerleaders for the war in Iraq?

Is hypocrisy and enthusiastically sending others to do what you would not their definition of "support?"

While I disagree with much of his politics, I will always deeply respect Sen. John Kerry, D-Mass., for his service in Vietnam. More than most, he has earned the right to offer his insights on this war and combat. Likewise, newly minted Democrat and Democratic Sen. James Webb of Virginia. As a highly decorated combat veteran, Webb understands well the price our troops are paying for their nonstop deployments. To counter that, he just introduced an amendment "requiring that active duty troops have at least the same time at home as the length of their previous tour of duty overseas. After four years at war, supporting our troops means addressing the erratic deployment tours that are breaking our military and ignoring the demands that extended tours place on our troops and their families."

Clearly, Sen. Webb is looking for ways to support our troops. But sadly, he represents a minuscule percentage of the country at best.

How do the U.S. television networks "support" our troops?

One way it seems, is by showing a montage of U.S. military vehicles being blown apart by roadside bombs. All of the networks and cable networks have shown this disgusting montage as background tape and none seems bothered by the fact that the video of our troops being killed and maimed was shot by the very terrorists who did the killing. If the networks have any sympathy for the families of the brave soldiers killed and wounded, they can support them by refusing to air this snuff film made by al-Qaida.

How do some liberals in Hollywood, who despise George W. Bush and the War in Iraq, "support" our troops.

Well, a couple of them, like Brian De Palma and Mark Cuban, make films that put our troops in the worst possible light. Their new film depicts the undeniably disgusting, criminal behavior of a handful of soldiers, and uses it as a political tool to go after the policies of President Bush while smearing more than 160,000 other troops in the process. How will De Palma and Cuban respond if their film inflames and incites Islamists in Iraq and around the world to kill more Americans?

What about the employers who now say they would never hire someone in the National Guard or hold a job for someone in the Guard currently serving in Iraq and Afghanistan. Does patriotism and the ultimate protection of their business, now have a price tag or bottom line?

Let's be honest with ourselves. As most of us blissfully go to the movies, sporting events, restaurants, the mall, walks in the park or sleep safely in our beds, we don't think of the troops. Never. Their sacrifice and pain never crosses our minds. Not once.

But it should. For it is only their sense of duty and heroic sacrifice that is separating us from those who mean to end our way of life. Shame on us all for forgetting that.