A dangerous dictator, a presidential candidate, and judgment 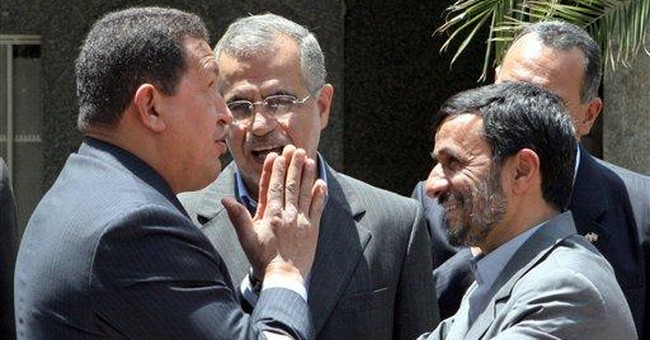 It’s hard to imagine a firm run by a candidate for President of the United States, lobbying on behalf of a company controlled by the likes of Idi Amin, Pol Pot, Saddam Hussein, or other murderous thugs who have run their countries into the ground while causing untold human misery.

Well, as we recently found out, we have to imagine no longer. While this story caused a minor ripple in the news a couple of months ago, it is worth repeating that Bracewell & Giuliani LLP, -- a Texas law firm of which former New York Mayor Rudolph Giuliani became a name partner in 2005 – actively and eagerly lobbied on behalf of Citgo Petroleum Corporation until last month. For those who still don’t know, Citgo is a wholly owned subsidiary of Petroleous de Venezuela SA (PDVSA), the national oil company of Venezuela manipulated lock, stock and oil barrel, by strongman Hugo Chavez.

Americans are unfortunately becoming more and more familiar with Citgo – which is overseen in the U.S. by a Venezuelan sycophant and bootlicker personally installed by Chavez – because of the propaganda campaign they are now running which would make Joseph Goebbels -- Hitler’s Minister of Propaganda -- proud. The ad campaign, which portrays Citgo and Chavez as the new Robin Hoods sending cheap heating oil to America’s poor, has been running in major newspapers and on television networks for months.

The campaign, which many in and out of government, believe is nothing more than a stunt to embarrass the United States and the administration of George W. Bush, has nonetheless, been fully endorsed and championed by the likes of Joseph Kennedy, Congressman William Delahunt (D-MA), and Congressman Jose Serrano (D-NY). Like Bolshevik revolutionary Vladimir Lenin, in Kennedy, Delahunt, Serrano, actor Danny Glover, and other Americans, Chavez has found his “useful idiots” to spread the word of his own “Bolivarian Revolution.”

Knowing this, it’s hard to understand how Rudolph Giuliani would willingly allow himself to be publicly and financially tied to a dictator in all but name who counts as his best friends, the leadership of Hezbollah, as well as the leaders of such terrorist sponsoring nations as Iran, North Korea, and Syria.

Sadly, the former Mayor not only knew all about his firm’s work for Citgo and Chavez, but, when uncovered by the media, somehow defended it by saying it was, “lawful and honorable…and helping to protect jobs…”

In the interest of full disclosure, I should mention that I have a personal history with Chavez. He has attacked me by name on his national television show stating that I’m an agent of the CIA out to destroy him and his government. A government that is neither “lawful nor honorable.”

I would have thought that the growing threat Hugo Chavez poses to our nation would not have escaped the attention of the former Mayor, but just in case, I’m happy to list a few news events pertaining to Chavez that may give him pause as he continues to defend cashing checks underwritten by a man directly responsible for the deaths of hundreds, if not thousands, of his fellow countrymen.

* In late 2006, the House Committee on Homeland Security, released a blood chilling report titled “Line in the Sand: Confronting the Threat at the Southwest Border.” The report stressed that the U.S. Military and Intelligence services believe that Venezuela is becoming the hub of terrorism in the Western Hemisphere. Worse, the report details how members of Hezbollah have already infiltrated the United States and that Hugo Chavez is actively working with that terrorist organization and others, to teach them Spanish and supply them with the Venezuelan identity cards needed to breach our borders.

* The government of Colombia considers Chavez to be the largest single threat to their own survival and to peace and stability in the Western Hemisphere.

* Chavez continues to use his petro-dollars to purchase billions of dollars worth of armaments from Russia, the People’s Republic of China, and Iran. Armaments well beyond the domestic security needs of his nation.

* Twice in 1992, while a Lieutenant Colonel, Chavez tried to violently overthrow the constitutionally elected government of then Venezuelan President Carlos Andres Perez. The estimate of the innocent civilians and soldiers killed in the failed coups, run from the hundreds to the thousands.

The list goes on and on, but there can be no doubt that Hugo Chavez represents a true and growing threat to our national security. A threat that includes the overt and covert support of Islamist terrorists intent on our total destruction.

Clearly, Rudolph Giuliani is a man of great principles and honor. He once rejected a $10 million contribution for post 9/11 disaster relief from a Saudi prince. That act makes it even more puzzling to understand why he continued a business relationship with an anti-American company controlled by a megalomaniac bent on regional and even world domination, until just last month.

Did he sever his relationship with Citgo for moral reasons, or because the blood money he was getting from Chavez was becoming a liability on the campaign trail? A clear answer is still wanted by the voters.