Partisan squabbling is an insult to troops 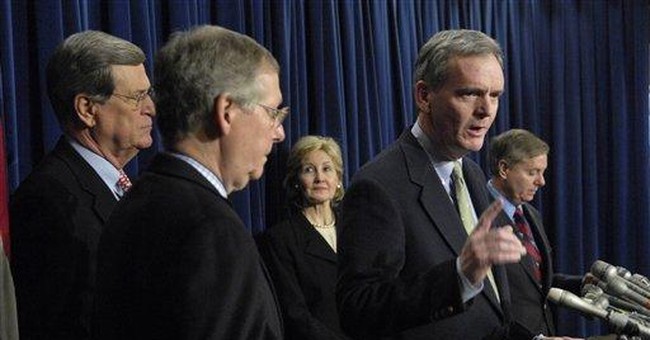 The infantile food fight taking place in Congress in recent days over which partisan, nonbinding Iraq resolution would get a vote is nothing short of a national embarrassment. Worse, it is a slap in the face to the troops in harm's way who are desperately looking for adult leadership from those who helped send them there.

Be it the House, the Senate or the White House, all too often, the arguments now being framed with regard to Iraq are being offered based on lowest-common-denominator, partisan self-interest. Too many politicians on both sides of the aisle are more interested in scoring debating points than in figuring out what is truly the best course for the people of Iraq, our young men and women fighting and dying in that country, and our national security.

As we are well into the 2008 election cycle, the Democrats predictably want to assign guilt to the Republicans for getting us into Iraq. The Republicans want to paint the Democrats as the party of surrender and appeasement. And the White House is looking for a miracle that will keep Iraq out of the clutches of the insurgents and Iran, get our troops home, and not have future scholars record the invasion as a monumental miscalculation.

As this disgraceful process moves forward, those of us who supported the invasion have an obligation to honestly answer some very tragic questions:

If we had not invaded, would up to 100,000 Iraqi civilian men, women and children now be dead?

If we had not invaded, would approximately 25,000 U.S. troops now be wounded?

If we had not invaded, would the critical infrastructures so desperately needed by the Iraqi people have been decimated?

If we had not invaded, would our allies in the Middle East have been put in an almost untenable position with regard to their relationship with the United States?

If we had not invaded, would we have spent more than $400 billion of U.S. taxpayers' dollars prosecuting this war?

If we had not invaded, would we have removed Iraq as the natural check and balance for Iran in the region?

Many more soul-searching questions can be asked with regard to the war in Iraq, but without a doubt, the answer to each and every question listed above can only be an unequivocal "no."

Our nation has fallen deeper and deeper into the nightmare that is Iraq, and we must be prepared to admit that we may never wake from this escalating tragedy during our lifetimes. And as this horror show plays out, who pays the ultimate price? You? Me? The president and his staff? Members of Congress?

No. None of us pays a real price. That indescribable pain is reserved only for our young men and women in uniform and for innocent Iraqi civilians being slaughtered in unimaginable ways and numbers. To them, and only them, do we owe answers and a solution.

The war in Iraq is a fact of life. We cannot go back in time and un-invade the country. There is quite a bit of revisionist history now being written. But what is indisputable is that in March 2003, the United States, all of our allies and even a number of our foes believed, beyond a shadow of a doubt, that Saddam Hussein possessed weapons of mass destruction. Given that, the logical assumption was that if he had them, it was only a matter of time before he turned one or two over to al-Qaida or another terrorist organization to use against us.

I will always believe that President Bush acted in a responsible manner when he decided to invade. The questions I have asked in the past, and questions that have been asked of me by former colleagues from the Pentagon, were these: Did the invasion have to be in March 2003, or could it have been a few months later, thereby giving our special operations teams and intelligence operatives more time to determine the facts, or even take out Mr. Hussein? Post-invasion, is it possible that - noble as his intentions may have been - the president was misled into a premature invasion by ivory tower academics in the Pentagon and White House?

Sooner or later, those questions will be answered. In the meantime, a number of our elected officials continue to disgrace themselves at the expense of our troops and the people of Iraq.

Surely, the tens of thousands of lives lost and the heroic sacrifice offered are worth more than a nuanced political position crafted to gain or hold an elected office.