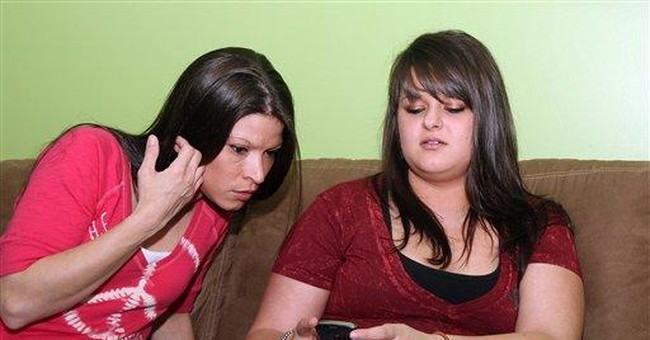 God bless cell phones. With them we can chat with our friends; we can watch the grossest zit since the dawn of time being popped via YouTube; and our kiddos can record their bat crap crazy teachers attempting to mitigate their First Amendment rights!

This week audio surfaced of a North Carolina teacher, Tanya Dixon-Neely (black), berating 13-year-old Hunter Rogers (honky) for criticizing president Obama (hate crime). Neely said Rogers could be arrested for slandering Obama. What a crock! Children cannot be arrested for criticizing Obama—at least not until his second term when we will truly see our First Amendment rights vanish like a pack of raw wieners at Rosie’s house.

Thankfully, Hunter hit the record button on his iPhone when this blathering big government gal started spewing lies to the kids—via North Carolinians’ tax dollar—exposing her incredible bias, and thereby getting her suspended. Hopefully she’ll get fired.

Parents in Hunter’s school district should demand she get canned. Why? Well, one reason is she doesn’t know what the hell she’s talking about and is teaching your children. Hello. What kind of Bozo screening process is in place that people like Tanya get the keys to your tadpole’s future? I wouldn’t let her sell fried chicken gizzards at a carnival much less school one of my offspring.

The only positive upshot to this sordid socialist scenario is that Hunter turned his cell phone on this mental schoolmarm. Hallelujah. Now parents and the planet can get a dose of the propaganda that’s regularly doled out in public schools.

With this in mind I think parents should tell their progeny each day before they send them off to school, “Now, honey, when Ms. Smith starts saying psycho stuff and threatening you with prison if you don't madly love on Obama, it is okay for you to record her and then upload this mess to YouTube. Don’t be afraid of these bullies. Don’t punch ‘em in the nose but instead punch record and then forward it to Jesse Watters and see if he can get Bill to run it on The Factor.” * Check your state's laws to see if two party consent is needed before YouTubing your audio or video.

Which brings me to a vision I just had. I have had a dream … a dream where the Hunter Rogers of the nation will point their iPhones and Blackberries at their scary teachers en masse and with one voice yell to these anti-American propagandists the words of Dee Snyder of Twisted Sister—“We’re not gonna take it!”

I have had a dream … a dream where sellers of progressive swill are fearful of publicly braying their biased beliefs before an army of God- and country-loving kids.

Can I get a witness, my brothers and sisters?