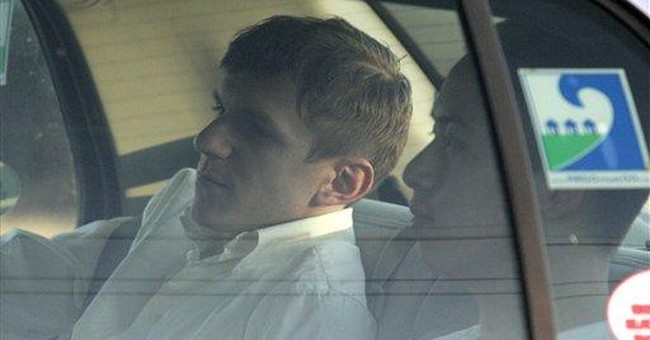 Because Hannah Giles (the femme fatale of the ACORN sting) is my daughter, as soon as the news of her ACORN companion James O’Keefe’s arrest in the Big Easy hit the fan, our phone lines lit up like a Christmas Tree with inquiries from friends and family, talk show hosts, bloggers and the Associated Press wanting to know what the heck was going on.

Matter of fact, my cell phone vibrated so much that when I got sick of answering it I put it to work on my shoulder to massage a knot the size of a monkey’s fist that I got from tarpon fishing the other night. And I also used it to shake two dirty martinis.

“What happened in Senator Mary ‘Louisiana Purchase’ Landrieu’s office?” They asked. “Heck if I know.” I responded. “I haven’t had any communication with O’Keefe since we attended Horowitz’s conference in Palm Beach last fall.” Hannah had no insider stuff on the situation either.

All I knew initially was that O’Keefe had been arrested for “entering federal property under false pretenses for the purpose of committing a felony” and that the Lame Stream Media (which failed to report on the ACORN corruption until after South Park and Sesame Street were spoofing it) had already turned O’Keefe’s charges into Watergate, Jr., found him guilty of JFK’s assassination and sentenced him to life in prison without food.

This misinformation, as you can imagine, brought Bertha Lewis out of her Punxsutawney Phil hole where she’s been hiding ever since ACORN was given their indelible black eye and onto The Ed Show—which, I believe, stands for Erectile Dysfunction—to hoop-n-holler with orgasmic, taxpayer-funded glee over James’ arrest and conclude that since O’Keefe got busted for wrongdoing, ACORN is innocent.

Whoa there, Bertha. You’re kind of skipping a few steps, big mama. First of all, it was not wiretapping. Second, I’m not downplaying the serious accusations against James and his three amigos. Thirdly, even if James robbed a bank with a ski mask and Uzi purchased on Rupert Murdock’s personal black AmEx, it doesn’t mean that ACORN is innocent.

Yep, Ms. Lewis, your dudes are still on tape, in multiple locations, uniformly giving advice (a.k.a. aiding and abetting) O’Keefe and Giles’ characters on setting up whorehouses with underage hookers, laundering money and evading taxes, none of which can be downplayed or erased no matter what James did or did not do in New Orleans.