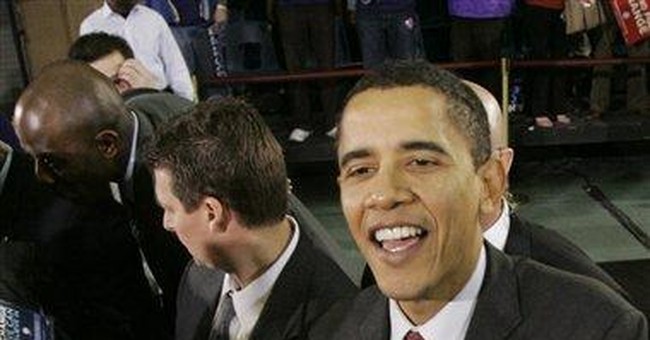 Barack Hussein Obama (or B-HO, as I like to call him) charismatically and emphatically denied reports this week that he is a closeted Muslim and instead declared candidly and with youthful verve that he believes in Jesus Christ.

Brian Williams and Mark Cuban, both carrying parasols, were sitting in the crowd during that news conference, and it has been reported that when B-HO gave this statement regarding his faith that they let out a shriek, threw their panties at him, and then swooned. I think the video of Williams’ and Cuban’s show of affection is on YouTube. Check it out . . .

Yep, this week the junior state senator made it clear that he is not a Muslim but a believer in the Lord Jesus Christ. Y’know, the Jesus Christ who’s totally cool with:

1. Abortion being available to mommy in all nine months of her pregnancy

2. Parents not being notified when their 13 year-old girl goes in for an abortion

4. Advancing the radical homosexual activist lobby in their pursuit to destroy traditional marriage and voting against the defense of traditional marriage (you know, that old Adam and Eve thing God came up with in Genesis? Well, that’s so yesterday with B-HO’s Jesus and his Church of the New Groove)

5. The creation of “special rights” for people who engage in homosexuality for the sole purpose of putting them at the front of the line on issues of employment, housing and litigation

6. The advancement of all “hate crimes” legislation, which ultimately could be used to silence pastors who believe—according to their own convictions—that homosexual behavior is . . . uh . . . wrong . . . and preach the same from biblical texts

7. The continued funding of Planned Parenthood clinics in our nation's inner cities, which are performing genocide against the populations of African Americans living there

8. B-HO going to a church that propagates anti-white, anti-American and anti-Jewish blather, zany 9/11 “was our fault because we’re racists” rancor, and a “black value system” (Hello! Can you imagine if a white guy did this?)—all via a pastor who has hung out with Qaddafi and honors Louis Farrakhan. Isn’t that special?

It has to be that “Jesus” whom B-HO follows because the one clearly defined in Scripture wouldn’t put up with that crap for a nanosecond. C’mon, Barack. You can’t play the Billy Graham I’m-a-solid-Christian-man card when your voting record and your church’s manifesto are that vapid toward biblical verities.

As far as I’m concerned, B-HO is to Christianity what Michael Jackson is to heterosexuality: He might be one, but he’s certainly not the poster child for the cause. I’ll give him that much. You know, when I watch Obama and the other secular “progressives” queue up to play the Christ card, it takes me back to John Kerry in 2004 when he tried to convince gun owners and hunters that he was Nimrod.

The only way Obama and his followers can keep Christ and their liberal credo is to blow off huge chunks of the Bible and replace Scripture with the make-believe notions of SP's new malleable “Gumby Jesus” who offers “suggestions” instead of thundering commandments.

The giddy, in love with B-HO Christian skipping around the maypole wearing rose-colored glasses needs to understand something: If it were left up to the punch drunk secular Left, evangelical Christians would officially be SOL in the USA, fo’ shizzle my nizzle.

How a true believer in Christ (as defined by Scripture) can say he or she believes in what Jesus, the prophets and apostles said and side with such a liberal politico simply because he is “charismatic and youthful” is beyond me.

I’d love to have an evangelical Christian (as classically defined) who backs Obama wade in here on the comment thread and defend (biblically):

2. his allegiance to a clearly anti-white, anti-Semitic, anti-American pastor/congregation

3. why B-HO, if he doesn’t buy into what his minister of mayhem propagates, doesn’t officially leave the congregation and disassociate himself from his mad maharishi and his bigoted beliefs?