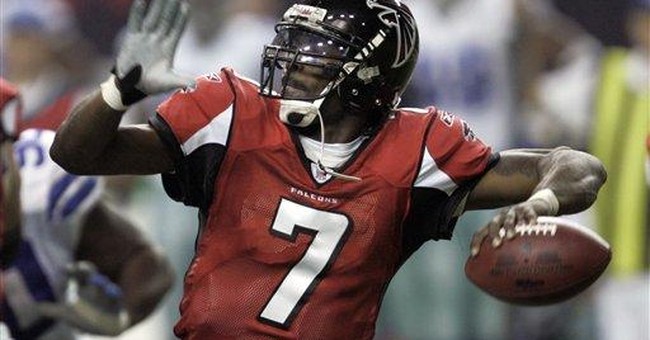 It’s sad that one of the greatest dog breeds ever to grace the planet, the American Pit Bull Terrier, has fallen into the hands of animal abusing idiots. Guys like Michael Vick, our nation’s scurrilous hip hop hoodlums and other waste-of-sperm-and-eggs are not even worthy to carry this canine’s excrement much less superintend their subsistence. The Pit Bulls should be walking these boys on the leash, teaching them to fetch, heel and sit and not the other way around.

I think I speak for all Pit Bull lovers by saying, “thanks morons for sullying a substantial animal’s rep via dog fighting.” Why don’t you Darwinian holdovers get another hobby, huh ladies? I’ve got something you could do. Since you like doing radical stuff … how about bungee jumping without the bungee? Or base jumping without a ‘chute? Or trying to catch bullets with your teeth? Yeah … that’s it.

Of the many things that suck about Vick’s and his vapid gang’s Pit Bull fighting, one particular thing (aside from the obvious abuse) that ticks me off is this noble breed gets officially branded, once again, as Satan’s Cerberus.

The truth of the matter is that the Pit Bull is one of the sweetest dogs that has ever schlepped this pebble and anyone who’s spent any time around a well bred bully knows that I speak the truth. Can I get a witness my brethren?

When I lived in Texas, I was privileged to have owned several of these fine animals. My children were raised with them from the day they came home from the hospital ‘til the time we moved to Dade County, Florida which unfortunately disallows these dogs.

My Pit Bulls guarded my girls with their life. They were my daughter’s favorite playmates. Our dogs would pull their little wagons, let my girls ride them like a pony, let them dress them up in goofy outfits, all the while my dogs sat there patiently taking it with a big Pit Bull grin on their faces.

At night my bullies would lay at my little ladies’ feet, protecting them as they simultaneously rested and recharged their batteries so they could wake up the next day and conquer the earth all over again.

Pit Bulls vicious? I don’t think so. Not mine. Not unless you really pushed them or threatened our family. If you were dumb enough to do that, then you got the message real quick from our pups that you were about to meet Jesus if you did not cease and desist.

Our dogs were more like comedians than commandos. They showed zero unwarranted aggression towards people and pooches. They had amazing discernment, insane athletic ability and undaunted courage. This breed impacted me so much I wrote a book about their magnificent spirit (go to amazon.com The Bulldog Attitude).

As far as I’m concerned, the Pit Bull is one of the most awesome animals on the planet. And before hype hit the fan, and the local news needed fresh chum for the gullible ones and the pimps and thugs became the owners of this noble animal, The United States of America thought so as well.

Yes, the U.S. believed that the Pit Bull was great enough to be our mascot in World War One. During WWI, Life magazine frequently had Pit Bulls on their covers and in their cartoons, using them as a symbol of America’s stalwart spirit.

In Jacqueline O’Neil’s book, the American Pit Bull Terrier, Jackie brings out the fact that a Pit Bull named Stubby was the war’s outstanding canine soldier. He earned the rank of Sergeant, was mentioned in official dispatches and earned two medals – one for warning of a gas attack and the other for holding a German spy at bay at Chemin des Dames until the American troops arrived.

In addition, the Pit Bull was also one of our nation’s beloved canine movie stars. Remember, the Our Gang and Little Rascals comedy series with Spanky, Alfalfa, Darla and Buck Wheat? Do you remember their dog, Pete? He was a Pit Bull (actually, they used ten different Pit Bulls for the show). Did Pete eat any of the cast of the show? No. Was he cool, tolerant, funny and well behaved as the Little Rascals used him to pull their wagons, do their tricks and run their errands? Yes.

Historically speaking, it was not the pimps and thugs or the foolishly over paid depraved athletes and empty entertainers that owned these dogs. Matters of fact, some of our most famous folks were fanciers of the Pit Bull, namely; Thomas Edison, Helen Keller, President Theodore Roosevelt, Jack Dempsey and Fred Astaire.

As you can tell my affection and esteem for this animal is sky high. My dogs were amazing. It sickens me to think that because of some goof’s desire to make some cash off a dog fight, or his desire to posture himself as some tough guy, or his wet dream of being just like the guy he saw on MTV that this brilliant breed walks away with a black eye. I say lets give the black eye to the bad guy who abuses a bulldog and leave the dog alone.