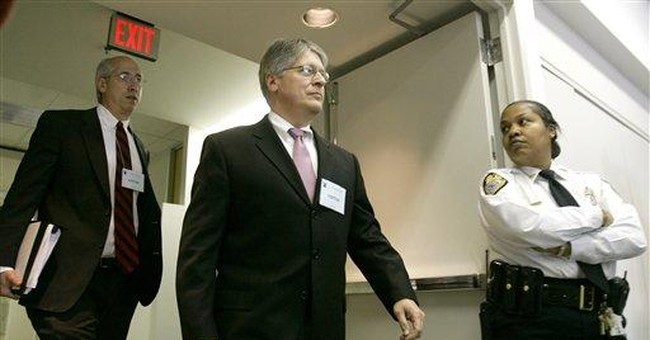 If I were Mike Nifong’s son or daughter, I’d change my last name PDQ. Why? Well, principally because that name has now formally become a pejorative in the American argot for anyone who will gleefully roast the innocent for their pipe dream of power.

Y’know, it’s just a matter of time before FOX has a new reality show championing the cause of folks who’ve been trampled by such soulless narcissists. The show could be called, “Help! I’m being Nifonged!”

Blinded by ambition in his quest to be Durham’s DA, Democrat Mike Nifong (why didn’t you listen to your mother when she told you, “If you don’t stop you’ll go blind!”) has officially become the biggest DA in the U.S.

There are several other ding dongs aside from Nifong whom we ought to continue to give a real rough time for being complicit in the Nifonging of the Duke Lacrosse players. People like the local cop who gave oversight to this Circus Stupidus who is notorious for his disdain for Duke students. I think his name is . . . Sgt. Gollieb.

Then you’ve got the shriveled testicle Board of (mis)Trustees and the admin cats at Duke who, cowed by what people might think of them, decided to serve these boys to the lions—facts be damned.

Let’s see . . . who else do we have that we must hound, disdain and then ignore forever? Of course, what is wrong with me? I must be getting old. I almost forgot the three race baiting stooges: namely, Al Sharpton, Jesse Jackson and the what’s-his-name Black Panther Party Leader. When are these screaming ninnies going to come forth and apologize for being ridiculously wrong on this issue and for wasting our time with their vile vomit via TV?

And lastly, we have the village bicycle . . . the person who put this ball in play . . . you know who I’m talking about: Crystal Gail Mangum, the black stripper who jumped on the let’s-bash-and-make some-cash-off-the educated-well-off-white-guy band wagon. Thanks, girlfriend, for screwing up so many lives with your stupid, vicious lies. Have a good life.

I bet these wrongfully accused and publicly deep fried boys are currently breathing subterranean sighs of relief while at the same time enjoying a big piece of shadenfreude pie at Nifong’s expense. Eat it up boys. You deserve it!

Yep, I guarantee the cold beers that Collin, Reade, David, their girlfriends and their parents are sipping on have never tasted sweeter as they now watch Nifong swing, like Haman, on the gallows of public scorn he initially erected for them.

I’m not God, but if I were, not only would my new book become a best seller, but I would also make sure of these two things: first, that I got to go elephant hunting with my good buddy Glenn Kendall in Tanzania this fall and second, that there is a special place . . . a little eternal corner in hell . . . complete with a huge dunce cap for an impenitent guy like Nifong who came so close to making these boys’ temporal lives a complete and utter living hell.