John Edwards Might Be Full of Poop, but Our Enemies Are Not 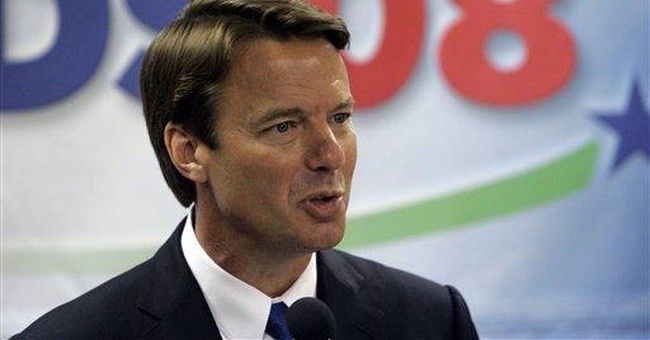 I’m originally from Texas where I was raised to actually believe people when they tell you something. You remember that old tired maxim that your word is your bond, don’t ‘cha? When I moved to Miami I was quick to discover that things were a tad bit different.

In Miami, your word means nada. As a matter of fact, I’ve come to learn that the opposite of what people tell me (a lot of the time) is the truth. Yes, Dorothy, I am no longer in Kansas.

Now, this isn’t really peculiar to South Florida, and I hate to admit, but it even happens in Texas. All of us, everywhere, say things we don’t mean. When a wife asks her husband, “Do these jeans make my hips look big?” the now sweating, self-preserving spouse says a quick “no” when he’s thinking “yes.” The reason being? Well, he wants to continue to eat home cooked meals.

Girls lie on dates all the time. When a girl cuts a date short telling her suitor half way through the hors d’oeuvres that she’s had a nice time but must get up early the next morning for work, what she is really saying is, “Please don’t kill me, you whacked out, ham fisted crotch rocket.”

Honestly, I dish the spin myself. The other day my wife’s friend got a really bad haircut. They were both standing in my kitchen when said friend asked me what I thought of her new doo. I said, “It looks nice, and it is probably way more manageable,” when what I was really thinking was, “Holy God . . . did you lose a bet or what?”

Insincerity plagues our speech; however, we would be unwise to think that the disingenuousness within our discourse is also part and parcel of the rhetoric of our ill-intentioned Islam (and other extreme) enemies. Yep, we’d be plain goofy to think that our enemies are just joshing or being hyperbolic when they say they want to destroy us and that for which we stand.

In addition, we’d be loopy to assume that if they do mean what they say that they’re just like us, and we can get them to stand down if we give them a squeaky toy.

Preening Breck Girl, John “autoerotic” Edwards, has of late, been traipsing around the U.S. telling us that the War on Terror is nothing more than a bumper sticker. John Boy takes the attacks and vents of our sworn enemies and downplays them. Edwards sees the WOT as nothing more than Republican-hyped fodder used to generate fear in order to cow their voting block to lockstep come November 4th 2008. I guess Edwards assumes that, much like him, our radical enemies are full of BS and do not mean what they say.

People who are not like the boot lick Edwards, on the other hand, believe that radical Islam and their hate drunk ilk intend to do exactly what they say they’re going to do.

What do our enemies propose to do?

In his new book, In The Words of Our Enemies, Jed Babbin has done a great favor for all of us who do not wish to live life with our heads up our butts and has compiled an extensive and veritable one stop shocking block of the hate speeches that have been vomited out by the tyrants and terrorists who are energetically auguring for our eradication.

In Babbin’s book you will read our foes’ invectives before they’ve been scrubbed clean and Lysol disinfected by our limp-wrist, liberal pundits and “news” outlets. For instance, you’ll get the skinny directly from the lunatic’s laptop regarding . . .

• China’s war strategy of paralyzing our computer networks and infrastructure as a precursor to a full military attack.

• Cuba’s plans to collaborate with Iran to bring the United States to its knees.

• Islamist’s bone-chillingly detailed campaign for the mass murder of all westerners.

Look, whether you’re conservative or liberal, do yourself a favor and just read the junk that spills off the tongues of our enemies. And then ask yourself, given their history, whether they mean what they say or not.

I, for one, take Osama, Ahmadinejad, Kim Jong Il, Putin, Chavez and Hu Jintao at their word. I don’t think these cats have the duplicity in their diatribes against America that we use in our verbiage with each other. I take them seriously when they say that they intend to crush us like a cockroach in Queen Latifa’s house. I also believe that to think otherwise is to do so to our own detriment.