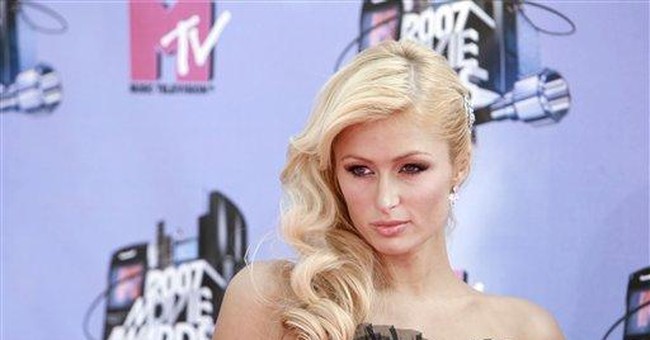 Have we, as a nation, become completely fascinated with stupid chicks—or what?!?

Girls, if you want to have our society’s spotlight shine down on you for no real reason other than you’re an idiotic, drunken narcissistic whore, well then . . . this is your window of opportunity, girlfriend! (*Remember: the opportunity of a lifetime must be seized within the lifetime of the opportunity. You can get more successful loser principles from my new book, 10 Habits of Decidedly Defective People: The Successful Loser’s Guide to Life!)

1. are a semi-decent looking ditz with fake, cantaloupe sized ta-ta’s,

2. are a mediocre singer who can sort of dance at the same time,

3. are able to quasi-convincingly deliver a line when directed,

5. are cool with having your crotch photographed more often than the Grand Canyon,

6. are okay with sleeping with various animate and inanimate objects while being filmed,

. . . then you need to get an agent, because you have all the makings of star. I guarantee, el Niña, you’re about to become very rich and famous in this vapid and fetid postmodern milieu.

Americans, it seems, can’t get enough of the immoral dumb chum that emits from the splooged brains like that of Lindsay, Britney, Paris and their wannabe ogling entourage. No wonder al Qaeda calls us the Great Satan.

For clarification purposes, lest someone think that I’m gay (not that there’s anything wrong with that) I’m all for watching and appreciating beautiful women. But c’mon, America, enough is enough. I’ve seen these chicks’ private parts via ET, TMZ and E! more than I have seen my own and I’m 44 years old.

Y’know, it wouldn’t be so bad to see these whacky wenches on our air waves if the media was fair and balanced in showing an equal chunk of accomplished women who have risen to notoriety without having to shine Clinton’s apple. But that ain’t gonna happen. At least not anytime soon. Maybe after the next terrorist attack on US soil wakes us the hell up. But not for now. As a culture, we have officially traded the applause we used to give to the truly noteworthy and have bestowed it upon the nebulous tramp.

You’d figure that after Anna Nicole Smith self destructed, died and went to an early heaven (cough) that these loose and loopy lassies would have learned a lesson. However, as Douglas Adams said, “Human beings, almost unique in having the ability to learn from the experience of others, are remarkable for their apparent disinclination to do so.”

I can hear Paris’ apologists now saying, “Oh, but these girls are cute, and what they’re doing is just part of adolescent high jinks. After all, as Cyndi Lauper sang, girls just wanna have fun.” Yeah, they’re cute. And yes, it’s entertaining. That is, until one of these oxygen thieves kills a kid in one of her drunken driving escapades. At that point, the cuteness and the amusement and our cavalier attitude regarding their asinine behavior will be officially over.