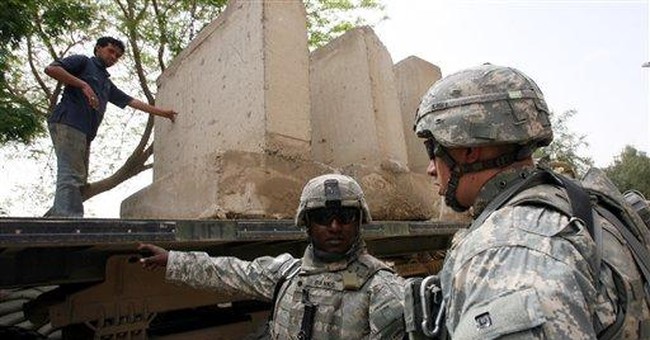 The Islam-O-Fascists must be happier than a pig in fresh mud as they watch our nation become more cleaved than Pam Anderson’s hooters. I’m certain the terrorists, both here and abroad, are having a good jihadic giggle over a smoldering hookah as they view our wilting will to war.

Yeah, I bet Bin Laden is blowing blond Lebanese smoke rings right now, as his group regroups with fresh enthusiasm regarding how they can kill us while we’re embroiled in a divisive, political whizzing match over what to do with people who want to kill us.

They are probably sharpening their scimitars on their whet stone even as I write this, while some of their thicker ones try on their new suicide bomber jackets and still others wait for FedEx to deliver a fresh supply of plutonium to their Afghani bat cave.

As a conservative, I’ve got issues that are obviously very important to me . . . stuff that I’ll fight over, split over—and a couple I’ll die/kill for; however, my primary concern since 9/11 is that we continue to have a nation to debate and divide in.

Sure, I want my presidential vote getter to be on the same page as me and my many issues. As a matter of fact, I’d like him to hire me as one of his top advisors and supply me with an all access pass to the White House gun room, cigar lounge and mini bar.

But since the Islamic radical butt monkeys attacked us five+ years ago and are currently conjuring up ways to eclipse their last assault, the main thing I’m looking for in America’s next el Capitan is that he will crush those who are trying to end this great American experiment and will do it on their turf and on our terms.

This means I’m not voting by looks, smoothness or pet political peripheral obsessions. I am officially a one-issue man this go round. The issue that drives me now is our country’s right to life.

• has excellent hair or a bad comb over,

• grins ‘til his teeth are dry or looks ticked off all the time,

• has superior body language or blinks too much,

• is Mormon, Methodist or Martian,

• has been married one time or three,

• has kids who love him or who hate him,

• has a big carbon footprint

• is telegenic or has a face made for radio, and lastly,

• believes to the “T” everything about life and marriage I believe.

Frankly Scarlet, I don’t give a damn. Ok, it’s not that I don’t give a damn, it’s just that what I concerned about is very specific: what I need to know is whether the next president elect will keep us protected and seek to throttle those who wish to whittle or nation down to nothing. Primarily, I’m looking for a president who understands how deeply we are hated by radical Islam and what a constant threat they’re going to be to us ‘til Christ returns and one who will effectively mitigate them during his term[s] via diplomacy—and if that doesn’t work, then by death.

* Check out ClashRadio.com to see Doug’s NEW VIDEO, “The 10 Commandments for Husbands.” Also, listen to his interview with distinguished theologian Anthony Bradley as they discuss Hip Hop slop, as well as the VT massacre. While you’re there, you can give a listen to his interview with Melissa Caldwell, spokesperson for the Parents Television Council, as they discuss Smut TV. Lastly, if you’re up late on May 10th, Doug will be on Fox News Channel’s Red Eye with Greg Gutfeld from 2-3am EST.