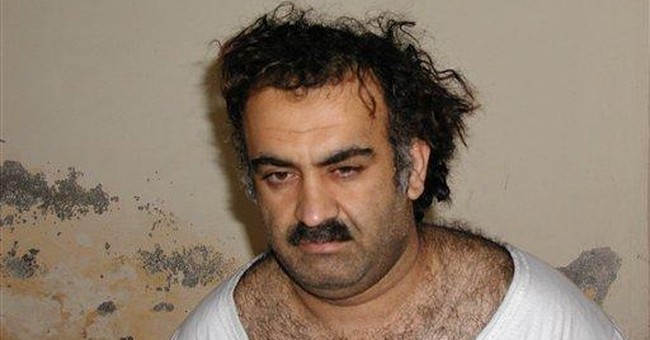 Khalid Sheikh Mohammed (KSM) painted himself during his trial this week at Club Gitmo as employee of the decade for Al Qaeda’s Death Monkey Squad. This piece of Samsonite prattled on with Islamic glee about his noxious brain farts such as . . .

• The Bali night club bombings which blew to smithereens a couple of hundred people.

• The killing of one U.S. Marine on an island off Kuwait.

• The 2002 bombing of a Kenya beach resort frequented by Israelis.

• The failed missile attack on an Israeli passenger jet after it took off from Mombasa, Kenya.

And if that wasn’t industrious enough, KSM (according to him) had many other things up his long sleeve dress. Stuff like: plans to off a couple of U.S. Presidents (Carter and Clinton . . . Go figure!), rub out Pope John Paul II and Pakistan’s President Musharaf, plus bring down the Sears Tower in Chi Town. Uh . . . let’s see . . . what else? Oh yeah, bomb the Empire State Building, the New York Stock Exchange, the Panama Canal, some big clock in London and Heathrow Airport.

All in all, this one Muslim has claimed responsibility for masterminding the deaths of several thousand people and had tens of thousands of others marked for mayhem had not Bush and his boys busted the bastard.

But then again, this all could be a scam cooked up by the Bush administration. Yes! That’s it! It’s all lies. Lies, I tell you. That is, if I am to believe Rosie O’Donnell (what a waste of an apostrophe!).

According to Orca, I mean, Facts-Be-Damned-O’Donnell, Khalid Sheikh Mohammed is a mere kitty cat and that mean old Bush has Lee Harvey’d him. Khalid wasn’t involved in any of the above. C’mon people. Wake up. That was Osama and Osama alone. We’re being hood-wigged and bamboozled by Bush, dammit, at least according to Rosie’s sweaty vociferations on The View.

The reason the shabby Sheikh confessed to these atrocities, thus saith the Rose, was because he was tortured. O’Donnell points to such evidence of his suffering to things like KSM’s ugly Glamour photo.

Yes, according to Mama Cass, for three years the CIA has been messing up Khalid’s hair (probably a series of violent noogies), not allowing him to shave very often and making him wear a Flash Dance T-shirt—and that lethal combination eventually caused the boy to cave. He couldn’t take it, man. He got to the place where he’d own anything for some Brylcreem, a Trac2 and some lycra.

Rosie bellowed, on the show she has now Jezebelled, that KSM is not an animal, but a man. I’ve got some news for you Rosie: so are you. As a matter of fact, take a picture of O’Donnell . . . any picture . . . and scribble a mustache on her/it, then scratch in some 5 0’clock shadow on her jowls and poof … you got yourself a Khalid Sheikh Mohammed! Try it. It’s fun. That’s why I think the big Rose is going to bat so hard for Khalid; they have so much in common, both physically and ideologically.

Barbara Walter’s, if you read my column (and I know you do, baby love . . . and sorry for not returning your calls yesterday), listen to me: you’ve got to fire Rosie now. Don’t be afraid of her. The veterinarians at the New York City Zoo have tranquilizer darts that’ll knock her straight out so that you can have her air lifted out of the building. It’ll be okay.

Bab’s, the girl is certifiable. Not only because she’s of the genus bovinae, but also because the girl has gone crazy! Do America a favor: get a saner chick on your show. Or get a good looking crazy girl. Or—if you’re going to do crazy, then get Charlie Manson. Channel him in every day from Corcoran State Prison and let’s watch him swing from a sprinkler pipe in his cell and howl at the moon. Chuck’s got two things on Rosie: 1) He’s more creative with his conspiracy theories and 2) He’s a better looking woman. Just a thought . . . toss it around with your producers and Joy and Elizabeth. Conference me in if you need to.

Lastly, in light of the Sheikh’s confession, I propose the following:

1. I say we give Bush and his crew a much deserved standing ovation for getting KSM.

2. Next, I say we “rob” Khalid of his humanity. He robbed us. We rob him. I suggest we strip him of his humanity with a bullet and broadcast it on Pay-Per-View.

3. On second thought, we shouldn’t kill him. Then he’d be praised as a martyr. Let’s keep him alive.

4. Instead of killing him, let’s put him in a non-air-conditioned cell down here in Miami, feed him ham sandwiches, only to be chased down with skunk urine while playing a 24/7/365 loop of Boy George’s music video “Do You Really Wanna Hurt Me?” with the volume ratcheted way up in his cell that’s been wallpapered, floor to ceiling, with O’Donnell in a Brazilian bikini. Let him experience a little temporal hell before he goes to an eternal one.

5. Whaddya think, too harsh? Yeah, it reads too harsh.

6. Let’s just shoot the guy and be done with him. No use torturing him.

7. Stay sober. Even though KSM was a major kernel of corn in the turd which is militant Islam, we can’t obsess on him now as there are thousands of murderous others currently looking to fill his sandals, and we’ve got to keep busy capturing and killing them.

* Logon to see Giles’ latest video: I’m Not Homophobic, I’m Chick-O-Centric. Also, check out Doug’s interview with Ambassador Dore Gold author of the book Fight for Jerusalem: Radical Islam, The West and the Future of the Holy City.