Get Britney a Gun and Teach Her to Hunt 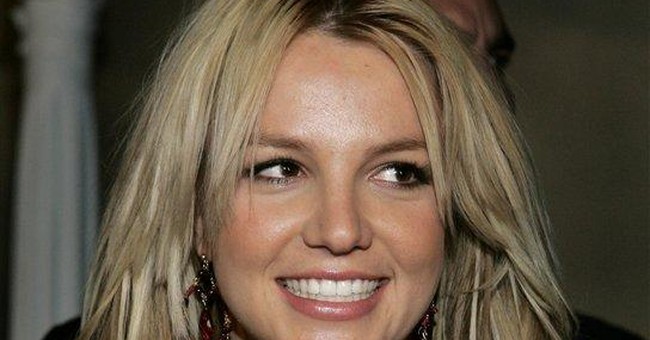 If I hung around all the Beavises in close proximity to Britney Spears and those Anna Nicole was unfortunate enough to schlep with and Hollywood was my reality, I, too, would:

2. be wasted during awards shows,

3. stay completely blitzed out of my brain on dope,

4. tattoo every square inch of my noggin,

5. pierce, not just my ears, but the front part of my brain,

I know I have a black belt in being a loveless jerk; however, I can empathize with their extreme behavior and their indulgence into mind-altering drugs. If I were forced into their situation and had to listen to Bobby Trendy, Howard K. Stern, KFed and Paris’s stuff 24/7, I would take bong hits morning, noon and night, mainline Ketel One and drink methadone like it was Yoo Hoo. If not, I’m afraid that I’d be up on murder charges, as I lean more toward being homicidal than suicidal.

Thankfully, drugs, an early grave and murder are not the only option for Brit (or any other girl caught in similar circumstances). One thing you young ladies could do is take responsibility and climb out of that toilet you’ve gotten yourself into, and muy pronto. That’s right, leave your “friends” now. All of them. Including your family, if they have aided and abetted your asininity. Do it. Wherever you are . . . go! Just take off running in the opposite direction, even if that means into heavy traffic on the 405. Dodging multiple high speed moving vehicles is safer than hanging with the warped monkeys you’re around now.

Most folks would say you Britney-types need to go to rehab. I’m all about going to rehab. I’m in rehab right now. I’m trying to get delivered from my acerbic Left loathing, my metrosexual nausea, my America loving, my gun collecting, my God worshipping and my testosterone addictions that the secular progressives say are “wrong.” It’s not going very well. I keep on falling off the wagon. Or is it falling on the wagon? Whatever it is, I’m not getting “better.” Anyway, this is not about me and my angst. My advice for you, Brit (and those mired in similar Shiite), is not to check-in to rehab, but dive into hunting. This is easy math.

Check it out: Hollywood hates guns, hunting and eating meat, and they spit out the daftest characters on the planet. Therefore, if you girls don’t want to be a Tinseltown divorced multiple times, plastic surgery addicted, booze and dope dependant STD machine, you’ve got to do the opposite of what Hollywood does; i.e., get into guns, hunting and eating meat. It’s logical. My grad school profs would be proud of that deduction . . . I think.

I’ve noticed in my wonderful world of guns and hunting that we don’t have too many drug and alcohol addled freak boys and girls. Sure, there are one or two helix misers in our humongous community, but we pale in comparison to Hollywood’s glut of Darwinian throwbacks. It seems as if the bang of the gun, the flight of the arrow and the thrill of the hunt are effective in keeping one’s feet tethered to the planet.

Hey, nutty college chick, you wannabe a “Girl Gone Wild?” Well, good. Women, like men, are born to be wild. Having an undomesticated feral facet to your life is right, and I believe that when you girls do not get a regular release of this rebel yell/huntress/outdoor otherness, you’re going to seek out some artificial, and oft times damaging, sensory satisfaction.

If you like thrills and chills, I’m talkin’ wacky, hair standing up on end, slap your momma, OMG stuff that blows away anything chemicals or herbs can provide, try this:

1. Hunt a grizzly bear with a recurve bow.

2. Go to Africa and stare down a cape buffalo, an elephant or a rogue bull hippo (out of the water) armed only with an old British double rifle.

4. Run over the desert mountains of Arizona following dogs that are hot on the trail of a mountain lion.

5. Try, just try, to sneak up on a mature whitetail buck or a giant kudu bull. I bet you can’t get within 1oo yards before he shows you his backside and then leaves you in the dust.

The above is true also for the young women who don’t strip, do sex tapes, aren’t drug dependant or dating back up dancers for boy bands. You, too, can be imbalanced and a candidate for a meltdown (though probably less sensational than a Brit’s) if you don’t get out of your regular world of bland and get dirty in the hunt.

It seems like more and more women are catching on to the buzz that is hunting. Thanks to Safari Club International and their Sables sub-division, the Becoming an Outdoors-Woman organization, the beautiful huntress Cindy Garrison and her TV show, the equally gorgeous Shemane Nugent’s example and Fiona Capstick’s amazing book, The Diana Files: The Huntress – Traveler Through History, the ladies are leaving that which is plastic and entering into that which truly satisfies, i.e., the hunt. I almost forgot to mention this, but major labels are coming out with safari clothes for girls so that you can look hot in the field. PTL!

Many women are following their men into the countryside. They, too, want to see sunsets and sunrises, breathe fresh air, see stars, get scared, enjoy a campfire, pursue game, feel the rush, eat the flesh, chew leather and truly get wild—but without the nonsense.

“. . . we need to conserve that bitter impulse that we have inherited from primitive man. It alone permits us the greatest luxury of all, the ability to enjoy a vacation from the human condition through an authentic, ‘immersion in Nature’ . . . and this, in turn, can be achieved only by placing himself in relation to another animal. But there is no animal, pure animal, other than a wild one, and the relationship with him is the hunt.” - Jose Ortega y Gasset.

Listen to Trump About Ukraine Before It's Too Late
Townhall
Another Ron Klain boast (an attempted dunk on Trump) is aging like fine milk in the summer sun
Twitchy
WATCH: Jill Biden Shoves Joe off the Stage as Reporters Shout Questions
Redstate
Ginny Thomas Ruins J-6 Committee's Plan to Destroy Her
PJ Media