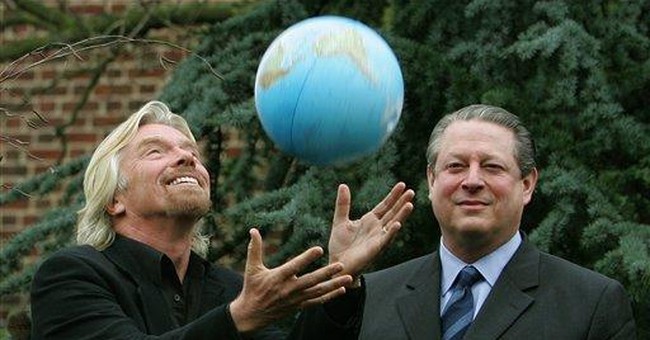 Our globe would probably cool off several degrees if Al Gore would just shut up and loose some weight. First things first, Al.

The unsubstantiated hot air that emits from Gore’s pie hole, the friction heat his chunky thighs generate when he waddles, plus the greenhouse gas he bellows out his backside after scarfing down the grande enchilada platter at Casa Ole are enough to make a polar bear bust a sweat.

Speaking of polar bears, I do hope it gets a little warmer up north. I’ve always wanted to hunt polar bear, but it’s just been too cold. Go warmer temps!

Back to Gore. You and I both know that Gore would be warning us about the negative effects of Spider Monkey urine if it would ingratiate him to the voting public. And that’s what his global warming, god awful warbling is all about: the unavoidable Presidential aspirations of Albert Gore. Jose Feliciano can see that.

Evidently, global warming didn’t hit Texas last month when I was there during Dallas’ Safari Club. It was cold. I’m talkin’ Hillary chilly. Also, I believe it snowed in Malibu this year. But that, too, could be a sign.

As a matter of fact, everything is now an omen that our orb is getting over-cooked.

• The tarpon bite has been a little slow and late this year in Miami. Global warming. I’ve noticed also that the flying fish have shortened their glide paths. Coincidence? I don’t think so.

• Astronauts doing whacky things with BB guns, love triangles and adult diapers? Must be global warming. Think about it.

• This could also be the reason why Rosie’s so angry all the time. The gradual roasting of our terra firma under her feet is making her irritated. Or, maybe she’s just plump and pouty. It’s a coin toss on that one.

I was watching a guy on TV a few weeks ago talk about earthy balminess. He had his running helicopter parked on a slab of ice. As he spoke about our toasty planet, the viewing audience got hit with the obligatory sad seal pictures, melting snowman, gloomy Eskimo photos and a watery Slushy from 7-Eleven.

After his opening remarks, the snow prophet of doom pointed to a nearby ice bank and said, “Behold, even as I speaketh the ice melteth.” I’m thinking, “Really? How about turning off the helicopter? The red hot engine and the 200mph wind storm the chopper is generating could possibly be culpable for your nippy apocalypse.” I guarantee if he would have switched off Chopper 1 and held still for 30 minutes, Nostradamus would be doing his prophecy with snotcicles hanging off his nose and his hands crammed down his pants in an attempt to keep them warm.

As the earnest tree humpers try to convince us all that their moist Armageddon is a soon coming slip-n-slide reality, I’m kinda thinking that maybe, just maybe, they’re full of crap, their stats are trumped, their science is specious and this is a politically driven liberal wet dream.

As a matter of fact, I’m sidin’ with Dr. Richard Lindzen (Alfred P. Sloan Professor of Atmospheric Science prof at MIT) when he says, “Future generations will wonder in bemused amazement that the early twenty-first century’s developed world went into hysterical panic over a globally averaged temperature increase of a few tenths of a degree and, on the basis of gross exaggerations of highly uncertain computer projections combined into implausible chains of inference, proceeded to contemplate a roll back of the industrial age.”

In the Politically Incorrect Guide to Global Warming and Environmentalism, Christopher Horner shatters the global warming blather in 303 pages of earth cooling facts. He chills the left with several inconvenient truths for Al Snore, I mean Gore, and his 5 alarm cheerleaders. Stuff like:

• The earth has often been hotter than it is now.

• Only a tiny portion of greenhouse gases are manmade.

• Most of Antarctica is getting colder.

• The media only recently abandoned the “global cooling” scare.

• “Global warming” hasn’t made hurricanes worse. Our tendency to put up trailer houses in their path is getting greater.

• There is no scientific consensus on global warming.

• Climate is always changing with or without man.

• Many big businesses lobby for global warming policies that will increase their profits – and our costs.

• The Medieval Warm period was significantly warmer than temps today and was a golden age for agriculture, innovation and lifespan.

And these are just the tip of the re-freezing iceberg.

I’d love to see the alarmist, over-the-top doomsters of the left take on Horner’s book page by page and try, with a straight face, to dismantle it. They couldn’t do it.

God, if you are up there and you are listening to me and you’re taking requests, I would love to watch a televised debate between Horner and Gore—or any one of his greenhouse gas sniffers. I’ll even go so far as hosting it down here in Miami, Jesus. Please, Lord . . . will You make it happen? C’mon, God . . . I don’t ask for much.

We Have Another School Board Hot Mic Fiasco. Want to Guess What Was Said? Hint: It's Full-Blown Woke.
Townhall
'If you don't believe that there's white privilege please don't teach': Here's another white woman singing about white privilege on TikTok
Twitchy
Peter Doocy Asks Biden About Those $2000/Checks He Promised 'Immediately,' It Doesn't Go Well
Redstate
6 Reasons to Oppose the Orwellian 'Equality Act'
PJ Media