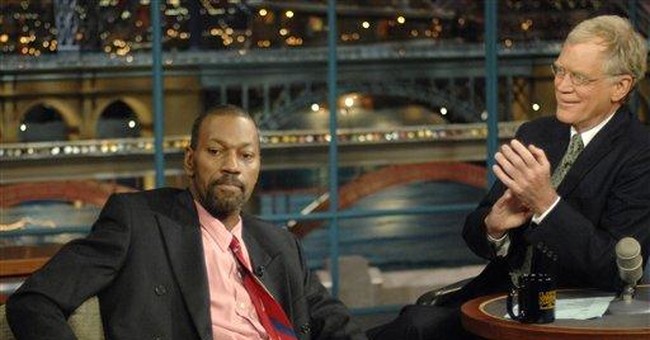 I know I’m not supposed to say this as a conservative and as a Christian, but Steve Colbert, John Stewart, David Letterman, Carlos Mencia, Dave Chappelle and Bill Maher are funny hombres. Even though I radically and fundamentally disagree with most of their content, funny is as funny does. They’re like farts. Most folks don’t really like farts, but farts are funny. Period. Especially, when it’s yours and it’s silent.

Look, as far as comedy goes, Mr. and Mrs. Conservative, you must bow and kiss the Left’s ring. They slay us. You can count on one hand how many conservatives are making a semi-distinct blip on the comedic scene. Who do we have? Dennis Miller, Brad Stine, Julie Gorin, and ________ . I had to google “conservative comics” just to add a third person to that list.

Why can’t conservatives get their comedic act together? The liberals, on a 24/7 basis, are tossing us soft balls that we should be driving out of the park in a humorous, prime time, way. It’s so easy it’s stupid. All we have to do is just read the crap that the left does, out loud, and it’s hilarious. We don’t even have to be that imaginative and try to develop quips, as they provide an endless supply of ammunition. We couldn’t make up the stuff they do even if we wanted to—no one on the planet is that creative.

The secular left is an amalgam of mayhem, a veritable Star Wars bar scene, a rogue gallery of freaks, geeks, nuts, sluts, slick politco’s and skanky ho’s—and we’re letting them walk without skewering the living day lights out of them.

What’s wrong with us? We’ve become nicer than Christ.

From Hollywood to the Hill, the Left and those who lean that way, do more psychotic stuff than my one-eyed uncle Joe does on a three day weekend binge when he’s all liquored up. They are a MadTV, SNL and HBO Special waiting to happen. There has to be some conservative capital lying around that can be earmarked to gather no holds barred comedians to paper shred these little darlings on TV and in film.

So why don’t conservatives crank out comedians? Here’s why I think our comedic contributions are weak. 1. Conservatives, obviously, don’t think comedy is important. The Daily Show and The Colbert Report don’t have The Factor numbers. Thus, they don’t seem to be as important as O’Reilly, or Rush or Hannity in an immediate sense. And they’re not. However, Steve and John do have the ear of millions of 18-35 year olds, who will, uh . . . hello, be at the wheel driving this nation a few short years from now. That’s kinda significant.

The Right is foolish and stupid to not be knocking themselves out to compete for the belly laughs of this demographic. Blowing off this bunch that’s not listening to conservative talk radio, watching Bill, or logging on to TownHall.com is to diss a crowd that will, in short order, be influencing our nation after you take the big dirt nap, conservative mom and dad.

Conservatives have got to get their ideas to the masses in modes other than talk radio, online newsportals, and Fox News. If conservs want to do more than choir preach and want to get their message to the young masses, then comedy and satire must come to the forefront.

2. We spit out lame comedians. When it comes to conservatives and Christians doing comedy, like soup in a bad restaurant, their brains are better left unstirred. Conservative comedians, especially Christian comedians, are not that funny. The reason why? Well, I think they’re too nice. They don’t really set the hook. They don’t really deliver the dig. For some reason, the laughmeisters of the Right are PC addled. Fear of negative press has gripped most of our funny men and women. When one is worried about what others will think they cannot really queue up to deliver a scorching and hilarious screed aimed at deflating whoever they’re after. Political correctness kills the comedian’s ability to say what needs to be said and how they need to say it. If conservatives want to compete comically they’re going to have to get raw. I’m talkin’ gloves off UCF slugfest funny.

3. We’re too serious. With our War with whacked out Islam and our ideological battle with the Secularists who whiz on traditional American values, the conservative can become a sober and somber person, which is understandable.

That doesn’t mean we can’t laugh, or more specifically, mock our enemies. Satire, comedy and laughter are great stress relievers and confidence builders. It’s a show of strength. It’s a sign that you’re ready to play. Nowadays, we won’t dare do cartoons about Osama and his ilk lest we tick them off. Are you kidding me? We’re trying to kill the terrorists, right? Let me see if I get this correct: we can kill them, but we can’t insult them with cartoons or sitcoms?

In regards to the secularists and their jacked up notions of where they’d like to take America, when the killer conservative comedians come forth and deftly employ their craft, I believe they will sway, through laughter, tens of thousands of ideological fence straddlers that are just waiting for us to get more hip and lighten up a bit.

Comedy is a tool the conservatives have got to champion and use against the secularists tools on the left. Look, it’s not enough to just sit back and moan about the things we don’t like. We’ve got to go the extra mile and have fun at their expense . . . all the while tabling, in an entertaining way, what we believe will uphold this great land and that for which it stands.

One of the reasons why some young people no likey conservatives is because no one is making them look at the Left and then laugh their butts off at them. It seems shallow, but that’s reality. I believe we need to change this by going Monty Python nuts. I’m willing to give it a try. My wife says I’m pretty funny, especially during sex. I’m not quite sure what she means, though.

Logon to www.ClashRadio.com and Check out Doug’s appearance on Fox and Friends as he discusses raising boys that feminists will hate. Also, be sure to listen to his interview with Clint Johnson, author of the book, The Politically Incorrect Guide to the South (And why it will rise again).