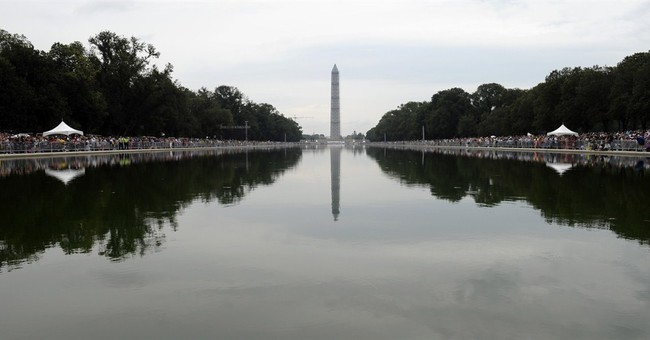 WASHINGTON -- The solitary sign in the middle of the throngs who gathered at the Lincoln Memorial on Wednesday raised the salient issue that went largely unmentioned by the speakers at the podium: jobs.

In a photograph that ran across the front page of The Washington Post Thursday morning, a black woman held up a large placard that said "We Still Have a Dream: Jobs, Peace, Freedom."

That sign spoke volumes about that one issue that still plagues the African-American community, whose jobless rates are off the charts. It's especially heart-wrenching that jobs came first on the list, above peace and freedom.

That was the unspoken and unfulfilled agenda at the 50th anniversary of the 1963 March on Washington where the Rev. Martin Luther King delivered his moving clarion call for racial justice.

The long line of Democrats, including President Obama, refused to acknowledge their party's biggest failure and its most embarrassing, self-inflicted wound -- the refusal to enact pro-growth, pro-job policies to open new economic opportunities for everyone.

Obama's address dealt for the most part with our country's remaining racial issues, but gave little or no serious attention to the weak economy that has hurt black people more than any other group.

Several days before the 50th anniversary observance, the Pew Research Center put out an economic report card on black advancement that said the black unemployment rate remains as bad as ever.

"Much has changed for African-Americans since the 1963 March on Washington" -- which, it will be recalled, was a march for "Jobs and Freedom" -- "but one thing hasn't: The unemployment rate among blacks is about double that among whites." If anything, it's gotten worse.

A recent report from the left-leaning Economic Policy Institute says that in 1963 the unemployment rate for whites was 5 percent and 10.9 percent for blacks. Now it is nearly 13 percent for all blacks nationally, and 41.6 percent for young blacks 17 and older.

The poverty rate among blacks remains high and is falling much more slowly than it did in the 1960s. It declined from 55.1 percent to 32.2 percent between 1959 and 1969, but in more recent years has stalled or, in many areas, grown worse. Nearly 30 percent of black households are now below the poverty income line -- three times the rate for whites.

In his address on Wednesday, Obama wasn't willing to face the grim reality that his 1930s-style economic policies were hurting his own people.

Instead, as he has before, he portrayed the economic circumstances facing blacks as one of fairness, insinuating that maybe there was some discrimination in there, too. It isn't his policies that are wrong but "our economic system" that is to blame for the lack of jobs, he suggested.

"The test was not and never has been whether the doors of opportunity are cracked a bit wider for a few," he said. "It was whether our economic system provides a fair shot for the many -- for the black custodian and the white steelworker, the immigrant dishwasher and the Native American veteran. To win that battle, to answer that call, this remains our great unfinished business."

There's nothing wrong with an economic system that is open to everyone with ambition and dreams and God-given abilities. But Obama came into office believing he would end the recession and drive down unemployment by spending trillions of tax dollars on roads, bridges and other infrastructure, and more government programs.

President Reagan took a different approach. He believed our economic system was not to blame for the recession he inherited; it was the government's policies that needed changing. As did President Kennedy in the 1960s, he cut income taxes across the board, including the maximum tax rate on job creators.

In a recent Washington Times op-ed column, free market economist Richard Rahn, who was chief economist at the U.S. Chamber of Commerce at the time, relates what happened:

What Obama is selling in his speeches to voters, as he was on the steps of the Lincoln Memorial this week, is the politics of victimization. The answer to the jobs crisis isn't about giving the economy new tax incentives to invest and expand business and start new enterprises, he says. Rather, the answer is government and more of it.

Immediately after being sworn into office, Reagan flatly declared that "government is the problem" and that freeing private enterprise from suffocating taxation and regulation were the answers.

To those who said his tax cuts would help only the rich, Kennedy said "a rising tide lifts all boats," and Reagan believed that, too. A sign of the times during the 1980s was the emergence of an inspiring magazine called Black Enterprise that heralded the success of countless black entrepreneurs.

Obama's focus on the Mall wasn't on how to stimulate new business startups and job creation. It was on what he said was King's unfulfilled dream, "challenging those who erect new barriers to the vote, or ensuring the scales of justice work equally for all, and the criminal justice system is not simply a pipeline from underfunded schools to overcrowded jails."

But that did not address the most deeply held concerns of another young black woman out in the crowd who, the Post reported, held a homemade sign that read, "The Dream Without Work Is Dead."

"Reagan thought like an entrepreneur, and thus intuitively understood that economic growth creates opportunities for everyone," Rahn says.

What a shame that Obama didn't speak to the dreams of those on the Mall who held their "jobs" signs up, hoping for a chance to climb the economic ladder of opportunity.

What a tragedy that his policies will produce only more economic stagnation, long-term unemployment and lives of quiet desperation.