Fed's Bond-Buying Program May Be on its Way Out 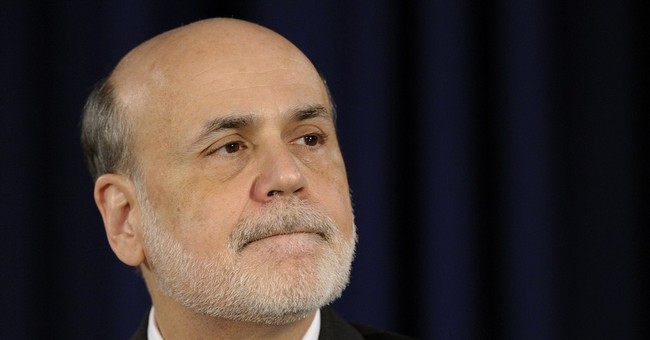 WASHINGTON -- The Federal Reserve served notice this week that it will begin this year to scale back its costly economic stimulus program that has been propping up the chronically weak Obama economy.

Fed Chairman Ben Bernanke's announcement was the economic equivalent of an ice-cold shower for President Obama's administration -- essentially saying that the time is coming when the Fed will pull the plug on the economy's only life-support system.

It may be a coincidence, but Bernanke's heads-up that the Fed will soon be tapering down its $85 billion-a-month bond-buying stimulus comes just a few days after Obama hinted the Fed chairman's job was nearing its expiration date. The president told Charlie Rose of CBS News that Bernanke had been in his job "longer than he wanted or was supposed to."

Bernanke didn't quite say this, but the hidden message in his announcement may have been: OK, Mr. President, you're on your own after this.

Of course, Bernanke sprinkled his remarks with plenty of caveats about the timing of the Fed's plans to withdraw from its stimulus initiative. If the economy worsened, the Fed could slow its scaling-back plans, or if it improved, they could accelerate them.

"Our policy is in no way predetermined and will depend on the incoming data and the (economic) outlook," he said.

Nevertheless, in a surprisingly optimistic appraisal of the sluggish economy Wednesday, Bernanke said he expected the jobless rate, now at 7.6 percent, to fall in the months to come and for the nation's economic growth rate to pick up over the next several quarters. He made clear the Fed would halt its bond-buying when unemployment reaches 7 percent.

It's not clear just where Bernanke sees economic growth coming from, or why he sees the job market taking off after months of meager full-time job-creation.

"The economy must add more than 365,000 jobs each month for three years to lower unemployment to 6 percent. That would require growth in the range of 4 to 5 percent and is not likely with current policies," says University of Maryland business economist Peter Morici.

Indeed, monthly new job figures haven't come close to this level, and there are no credible forecasts that suggest they will in the near future.

Economic growth, which has been mediocre throughout Obama's presidency, has averaged only 2.1 percent since mid-2009 -- well below the 4 percent to 5 percent range needed to bring unemployment down to Bernanke's targets.

In the 1980s, Ronald Reagan faced a severer recession, with unemployment rising to 10.8 percent, high oil prices and double-digit interest rates. But after Reagan's across-the-board tax cuts kicked in, economic growth averaged 5 percent and the jobless rate plunged to 7 percent.

The economy is being held back by very bad policies, including growing trade deficits that rose by 8.5 percent between March and April as demand for imported goods outpaced American exports. That's the painful price we pay for Obama's four-year resistance to negotiating any new trade agreements that would open emerging markets to made-in-the-USA products.

High oil and gas prices -- the result of anti-growth energy policies -- increased government regulations and higher taxes on investment are preventing our economy from reaching its full potential. Manufacturing, consumer spending and business inventories have slowed.

"Dodd-Frank regulations make mortgages, refinancing and home improvement loans much more difficult to obtain. The recovery in housing construction, though welcomed, remains lackluster as compared to past recoveries. In turn, this slows expansion in building materials, major appliances, furniture and other durable goods," Morici says.

The White House continues to peddle the bogus line that manufacturing jobs are growing, but Washington Post fact-checker Glenn Kessler reported Sunday that "the growth in manufacturing jobs has basically stalled over the past year."

Yet there was Bernanke telling reporters with a straight face Wednesday that the economy was showing signs of improvement, and that future risks to the economy have "diminished." But where does he see strong growth in this economy to justify his suggestion that the time to scale back the stimulus is now fast approaching?

Even the Fed's own surveys aren't finding it. Earlier this month, 11 of the Fed's 12 banking districts reported only "modest to moderate" economic growth. Only the 12th, in Dallas, reported strong growth.

Indeed, even several Fed members said this month's Beige Book survey fell well short of the strong, sustained growth that is needed before anyone even thinks about scaling back the Fed's $85 billion-a-month bond-buying stimulus.

The sad fact of the matter is that Bernanke's stimulus efforts, as far as they've gone, have been the only policy holding up the weak Obama economy.

But maybe he is sending a message to the White House and Congress that stronger fiscal medicine (a simpler tax code and lower tax rates?) is needed to lift this economy to a higher level of growth and job creation.

Maybe he's saying the Fed can't do much more than it has, and it's time to enact a long-term, pro-growth, pro-jobs program. Or as John F. Kennedy said in his 1960 campaign to cut income taxes across the board: "We can do better."