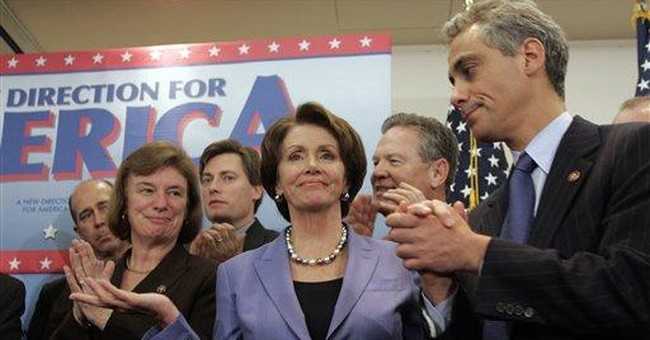 WASHINGTON -- Democrats went home for the spring recess hoping they had weathered the worst of the Republican attacks on Obamacare, only to get pounded in town halls by angry voters intent on turning up the heat from now until election day.

The GOP's House and Senate campaign committees were escalating their offensive, too, on a growing list of vulnerable Democrats who voted no then yes on the final health package, killing the Viagra amendment that is further enflaming political passions back home.

For weeks the Viagra issue has been burning up the airwaves on talk radio where conservatives charged that sex offenders could get Viagra and other drugs treating erectile dysfunction under Obamacare plans. The major media refused to touch the issue, until the Congressional Research Service confirmed last week that taxpayer-subsidized health plans under the Democrats' new law could indeed provide sex-enhancing medications to people who want them.

In a memorandum, the nonpartisan CRS told Republican Sen. Tom Coburn of Okalahoma, who's a medical doctor, that there were no restrictions in the new law "which would require health plans to limit the type of benefits that can be offered based on the plan beneficiary's prior criminal convictions."

"Additionally, there do not appear to be any provisions that would specifically restrict qualified health plans' coverage of drugs prescribed to treat ED," the memo said.

Congress' official research arm said "a convicted rapist, child molester, or other sex offender who is not incarcerated would not appear to be excluded from enrolling in a qualified health plan through an American Health Benefit Exchange in their state solely because of that conviction."

Coburn was ridiculed by Democrats when he offered an amendment last month during Senate consideration of the bill to prevent such people getting Viagra prescriptions under the administration's medical care law.

Assistant Senate Majority Leader Dick Durbin of Illinois called it a "gotcha amendment" to embarrass Democrats in the elections, and it was rejected by the Democratic majority 57 to 42.

Meantime, lawmakers who voted for Obamacare were feeling the heat of angry voters who packed town hall events in surprisingly large numbers so early in the election cycle.

The 90-minute barrage of questions and criticisms "was fierce at times and relentless," the Glens Falls Post-Star reported last week.

In Florida's 24th District, Democratic Rep. Suzanne Kosmas, one of the GOP's chief targets in November, preferred call-in "tele-town hall" events rather than face-to-face meetings. But station WDBO reported that "More than 4,000 people called into the event and many of them let her know they didn't like her yes vote" on Obamacare.

"How can a Congressperson that has been elected by the people just ignore the will of the people and allow their party to buy and bribe and extort votes to pass a bill that nearly 70 percent of the American public did not want," a caller asked her. In back-to-back town hall meetings in Bedford and Merrimack, N.H., Rep. Carol Shea-Porter, another vulnerable Democrat, "faced consistent boos, heckles and catcalls after almost every point she rattled off in defense of her vote," Politico reports.

"When she told the crowd the obvious -- that they had the chance to oust her in seven months -- the notion prompted claps and a promise from one man who thundered, 'And we will.'"

The National Republican Congressional Committee has been running TV ads in many of these key districts, most recently against Kosmas and Rep. Allen Boyd in Florida who they are targeting as part of the "Flip-Flop Five." Polls suggest that Florida will vote heavily Republican in November, largely because of opposition to the health care plan.

The word coming back from House Democrats to party leaders here is that voter anger in competitive districts is intense over Obamacare and it's not going to recede anytime soon. Indeed, Democratic strategists are now talking about a turnover wave that could topple their congressional majority.

At a breakfast briefing last week, Democratic pollster Stan Greenberg implied that if the election were held today, "Republicans would make similar gains to their 1994 wins, when they took 54 seats and the majority," The Hill weekly newspaper reported. A GOP gain of 40 seats would put them back in control of the House.

The political reality that is at work in this election is a weak economic recovery that is going to produce anemic job growth for the rest of this year, skyrocketing federal debt that Obama's trillion-dollar health care entitlements and other spending initiatives will worsen and a wave of government rules and regulations that will suffocate future economic innovation and growth.

If the Democrats think this month's town hall meetings were tough, wait until they see the ones that await them in August.