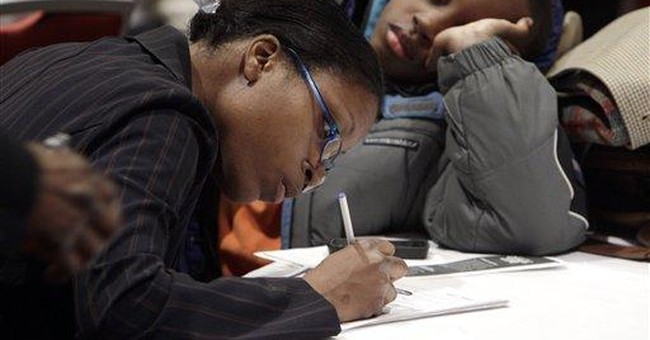 WASHINGTON -- The harsh economic reality for black Americans and their national leaders here is that black unemployment is worsening under the policies of the first black president.

The sadder political reality is that these leaders, frustrated that blacks have the highest jobless rate among all other Americans, are going easy on President Obama, with polls showing virtually no decline in black support for him, at least not yet.

Even more depressing, black leaders are still calling for more of the same old economic bromides to deal with black unemployment, unwilling to break with leftist Democratic policies that have made things worse for their own people.

While the national unemployment rate for all Americans is at nearly 10 percent (17 percent if you count people who have given up looking for jobs or work only part time), the black jobless rate stands at 15.8 percent and a lot higher than that in states such as Michigan, New York and California.

Jobless statistics in key sectors of the black population are off the charts for younger blacks. According to the U.S. Bureau of Labor Statistics, more than half of black males between the ages of 16 and 19 are unemployed.

If George W. Bush -- or any Republican, for that matter -- were still in the White House, black leaders would be pounding the White House for their failure to create more jobs. The nightly news programs would be running nonstop stories about inner-city unemployment and the bleak employment picture among minorities.

But as the jobless numbers worsened in black communities as well as across the country, the complaints among black leaders in Congress were few and far between or at least muted.

A recent front-page headline over a Washington Post story about black unemployment read, "Black Caucus frustrated but reluctant to say so," with the subhead that read, "Lawmakers think Obama should be doing more for African Americans, but they won't criticize him."

But as the situation grows more desperate among black Americans, who are beginning to see little or no evidence that they are benefiting from the nearly $1 trillion the president is spending on the jobs programs he has signed into law, black leaders are beginning to speak up. The first faint glimmers of political unrest are beginning to be seen and heard.

Increasingly disgruntled Congressional Black Caucus (CBC) leaders are now saying that White House officials have taken them for granted, believing that they would not publicly criticize one of their own.

Black leaders admit that they held their tongues and kept quiet in public, despite their frustrations. But as the complaints grew back home about the dismal economic environment blacks face, the feedback is becoming a bit more testy and more critical.

"We concluded they were just kind of listening to us and that then they would go back (to their offices) and conclude that we would do nothing," Missouri Rep. Emanuel Cleaver, the CBC's vice chairman, told the Post's Michael Leahy. "Because they had concluded there's a black president in the White House and that, to some degree, the Black Caucus, you know, was constrained in expressing its desires. After a while, we said, 'Hey, we see what's going on and it's nothing.'"

Black leaders met privately with Obama earlier this month, but thus far they remain in line with his economic policies, more big-spending jobs bills, higher taxes to pay for them and an increased minimum wage that at $7.25 an hour has priced younger blacks out of the workforce.

And state minimum-wage laws are pushing the hourly wage higher to $8 or more in places such as California, Illinois and Massachusetts, where it is a job killer.

Raising the minimum wage was one of Obama's first economic moves and, to a large degree, is responsible for reducing the number of jobs for unskilled, unemployed blacks who are disproportionately high-school dropouts. As Democrats and Obama have pushed the minimum wage ever higher, entry-level jobs for the unskilled have fallen sharply and black unemployment has grown exponentially.

While Obama spends his time bashing the big banks and the insurance companies and business, the entry-level jobs these black Americans are desperately seeking have disappeared.

Black leaders last week were pushing for more spending on summer youth jobs, government training programs and public-works projects when they should be calling for a lower minimum wage, or a youth differential wage to make them employable again.

When black leaders came out of the White House following their one-hour meeting earlier this month, California Rep. Barbara Lee, who heads the CBC, said, "We talked about the desperation that we're feeling in our communities throughout the country."

That desperation is only going to get worse as long as Barack Obama and black leaders continue to pursue the same old tax-and-spend policies to grow government instead of policies that will grow the private economy.