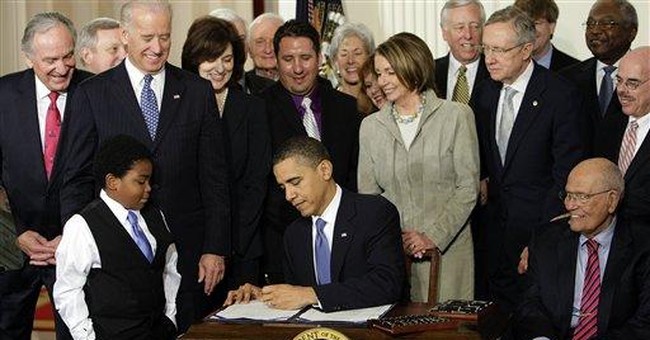 WASHINGTON -- The long legislative war over Obamacare now moves to larger and more contentious political battlegrounds in the House and Senate midterm elections and the federal courts.

Obamacare squeaked through the Democratic House on bare-knuckled power politics -- despite recent polls showing 54 percent of Americans are opposed to it -- and justified fears that its true costs will send federal spending, borrowing and taxes to unprecedented levels.

But the war against the most sweeping government power grab in U.S. history isn't over; it's just become wider and, politically, more lethal -- for Democrats. Let's take these one at a time.

Heading into the final stages of the health care battle, Democrats were facing losses in November of 20 to 30 seats in the House, and perhaps four to five seats in the Senate, according to most election forecasters.

Their potential losses mushroomed after the House vote when nearly a dozen Democrats who had voted against Obamacare last year switched to the yes column Sunday under intense pressure from the White House and their party's leadership.

Many of the switchers are "freshmen" facing particularly tough reelection prospects in conservative-leaning districts, and at least 20 who voted for it are from districts Obama lost in 2008. Switchers like Reps. Betsy Markey of Colorado and Suzanne Kosmas of Florida, who went from no to yes, are in Republican-leaning districts that voted for John McCain in 2008 and where voter anger with Obamacare is strong.

Election handicappers and pollsters say Sunday's vote has improved GOP prospects for gains in November, possibly as many as 30 seats in the House, and maybe even six to seven pickups in the Senate. Democratic Senate seats are in jeopardy in Delaware, Connecticut, Nevada, Illinois, Colorado, Arkansas, Pennsylvania and North Dakota.

A big reason behind this wave is that voter intensity is in favor of the GOP. An NBC News and Wall Street Journal poll shows Republicans with a double-digit lead over Democrats when voters were asked which party they'll support in their congressional districts.

"Obama and the Democratic Congressional leadership have dug themselves into a deep and dangerous hole, and the only question right now seems to be the severity of the drubbing," elections forecaster Stuart Rothenberg writes in The Rothenberg Political Report this week.

Meantime, another front in the war on Obamacare has opened among the states and in the federal courts where an armada of lawsuits are about to be filed to block key provisions in the new health care law.

Legislation and constitutional amendments have been introduced in at least three dozen states that argue the government has illegally exceeded its Constitutional reach by requiring citizens to purchase health care plans or else suffer hundreds of dollars in annual tax penalties. Thousands of Internal Revenue Service agents will be hired to police this mandate and crack down on any citizen who refuses to do so.

Virginia and Idaho have enacted bans against the mandates, and many other states are expected to follow suit. State attorneys general in Virginia, Idaho, South Carolina and Florida are preparing to file lawsuits in federal court in a legal battle that is expected to go to the Supreme Court.

"While Congress has used its taxing power to fund Social Security and Medicare, never before has it used its commerce power to mandate that an individual person engage in an economic transaction with a private company," Georgetown University law professor Randy E. Barnett writes in The Washington Post this week.

The courts have usually upheld the government's regulatory powers in interstate commerce. But that is no longer a certainty in the conservative high court that for the first time has struck down bans on firearms and upheld a corporation's right to spend money in political campaigns.

Further fueling the backlash against Obama's massive expansion of government entitlements -- despite the near-insolvency of Social Security, Medicare and Medicaid -- are the Congressional Budget Office's dubious cost estimates claiming that Obamacare is paid for and, indeed, will cut the deficit.

Most of CBO's estimates are based on specious political expectations that Congress will, as its bill promises, slash $500 billion in Medicare costs over 10 years, which will never happen. Lawmakers passed legislation to slash Medicare payments to doctors and postpone, each year, their action for another year in the so-called "doc fix."

Their real plan will eventually call for a nationwide sales tax to keep the health care plan alive and, by then, there will be another powerful special interest group lobbying for its immortality.

Meanwhile, if you want to see the future of Obamacare, look at what's happened under the very similar health care plan in Massachusetts that has turned into yet another oppressive entitlement funded by taxpayers.

"More than half of the 408,000 newly insured residents pay nothing," says health care analyst Grace-Marie Turner. Another 140,000 people were uninsured, assessed a penalty or exempted. Because of the shortage of doctors, more than half the state's internal-medicine doctors no longer accept new patients; emergency rooms are packed, insurance mandates have driven up health care costs, waiting periods to see a doctor are much longer, and three of four major insurers had operating losses last year as medical expenses soar.

That's what awaits all of us in the age of Obamacare unless it is stopped.