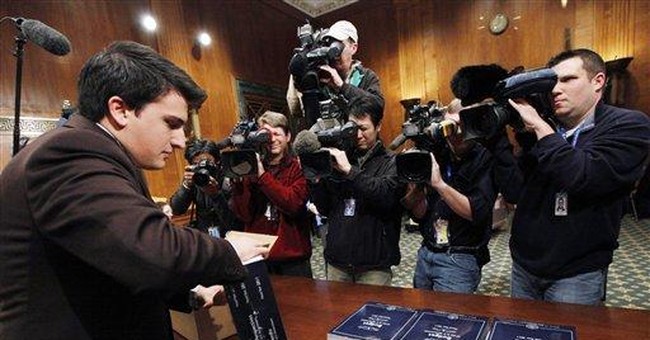 WASHINGTON -- This is the year of the angry voter, and one of the things they're angriest about is that the government's spending our money faster than we can make it, piling up mountains of debt that threaten to drive the U.S. economy into another financial crisis.

President Obama's swollen $4 trillion budget for 2011 would spend about $1.3 trillion more than is expected in federal revenue, after running up what is now estimated to be a $1.6 trillion deficit in the current fiscal year.

Despite all of his feigned, disingenuous concern about budget deficits and a rising national debt, Obama is spending like there's no tomorrow.

His budget does not cut back or restrain any of the major proposals in his agenda. It still contains the massive $2.5 trillion health care plan that for all intents and purposes has been rejected by the voters. It still has his job-killing cap-and-trade energy proposal that died in the Senate. It continues to call for hundreds of billions of dollars in additional spending to pursue his failed economic strategy in a vain attempt to spend ourselves into a recovery.

"One would think the nation's deteriorating fiscal picture would cause the White House to scale back its spending-and-debt spree. Think again," says Brian Riedl, chief budget analyst at the Heritage Foundation.

"Over the 10 years in which both budgets overlap (fiscal years 2010-2019), this year's budget would spend an additional $1.7 trillion and run up an additional $2 trillion in budget deficits," he said this week in a bleak analysis.

How bad are Obama's deficits getting? Riedl said the president's 2011 budget plan "shows annual budget deficits as much as 49 percent larger than last year's proposal -- raising the debt by an additional 6 percent of GDP over the same period. It is a spending spree that will drive up both taxes and deficit."

This, of course, is part of Obama's and the Democrats' plan. They are running into intense political opposition to the tax plans they have floated thus far. By running the government's debts into dangerous territory that threatens the economic foundations of our country, they hope to frighten Americans into accepting higher tax rates they wouldn't otherwise support.

That not only means repealing the two top income tax rates in the Bush tax cuts at the end of this year, but raising taxes on the middle class, too.

"It will be virtually impossible for Mr. Obama to keep his promise not to raise taxes on the middle class while paying for an enormous increase in spending. Given the planned spending levels, taxes will have to rise substantially to get to the target 4 percent deficit figure that the White House wants," Stanford University economist Edward P. Lazear writes in the Wall Street Journal.

"Medicare tax increases on wages and dividends, and new levies on businesses, are already being discussed. In the longer run, we may see a push to introduce a federal value-added tax," Lazear says. Indeed, a value-added national sales tax is already being considered by the Democrats on Capitol Hill.

Federal budgets are complicated and the news media, particularly the nightly network news shows, do an abysmal job of explaining what they contain and what they will mean to the average American.

But Heritage's Brian Riedl is especially adept at explaining its statistical nuances in plain English so that most people can understand. Here are seven points he thinks every taxpayer should know about what Obama's budget would do:

-- Raise taxes for 3.2 million small businesses and upper-income taxpayers by an average of $300,000 over the next decade

-- And double the publicly held national debt to over $1.8 trillion

All of this is going to place a huge burden on our economy in the years ahead as more investment capital is siphoned off by Washington to feed the expansion of government at the expense of the private sector, which remains weak and undernourished.

It is the reason, as I reported in my last column, that the nonpartisan Congressional Budget Office is forecasting anemic economic growth in the 1.6 percent to 1.8 percent range this year and next.

Not so for the Obama administration. It is exuberantly forecasting better than 4 percent annual growth in the next few years from 2011 to 2014. Not many economists are buying into their claims.

Says University of Maryland economist Peter Morici: "'Rosie Scenario' wrote this budget. A populist government, similar to those that drove Latin American republics into bankruptcy during the 1970s, is in charge," he says.