Time to Rein in Unspent Stimulus 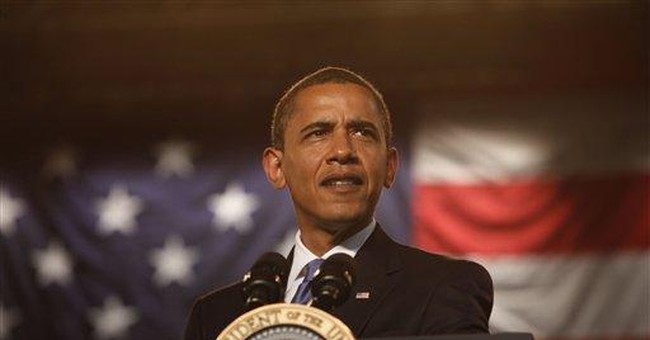 WASHINGTON -- Nearly five months into Barack Obama's presidency, his stimulus program is failing to produce the jobs he promised. And voters are souring on his big spending, deficit-driving policies.

A nationwide Rasmussen poll found that nearly half of Americans (45 percent) want the administration to stop spending the remaining bulk of the $787 billion economic-stimulus fund, doubting the money will create any new jobs. Just 36 percent want the spending to continue, while 20 percent say they're not sure.

With the unemployment rate spiraling up to 9.4 percent in May and this year's budget deficit speeding well past $1.8 trillion, Americans are turning against Obama's handling of the economy and the unprecedented rise in government spending.

Last week, the Gallup Poll said that while 55 percent of their sampling approved of the way he was handling the economy, 42 percent disapproved -- up sharply from 30 percent in February.

Americans are growing even more disgusted with the way Obama is dealing with the budget deficit -- with 46 percent approving and 48 percent disapproving. His numbers are worse on the issue of "controlling federal spending" -- 45 percent approve, but, for the first time, a 51-percent majority disapproves.

These polling numbers were reinforced by a number of economists on the left and the right who say his infrastructure stimulus has been an abject failure from the beginning.

"Despite administration claims, the stimulus package has created or saved few jobs," said University of Maryland economist Peter Morici. "This is best seen in the absolute absence of growth in state and local government employment." "The stimulus package was poorly conceived. Not enough is devoted to hard projects, and little of the spending will stimulate permanent growth," Morici said last week in his latest economic analysis.

The same view can be found at the conservative Hoover Institution on the Stanford University campus.

"The end of the recession is still months away, but it is increasingly clear the stimulus package was a serious mistake. To date, it has had no identifiable beneficial impact on the economy," Stanford economist John Cogan told me.

"More important, its impact later this year and next will be decidedly negative because the funds required to finance the package's spending will be drawn from private-sector resources that are needed to fuel the recovery. At this juncture, Congress would be wise to repeal the remainder of the program," Cogan said.

That idea may be gaining support among Republicans on Capitol Hill whose "stop the spending" plea is resonating with millions of Americans angered by the Obama Democrats' spending spree on make-work, pork-barrel projects that will enlarge the federal deficit but employ few workers.

The economy is clearly showing signs of life that is expected to bear more growth in the third and fourth quarter, even though only $44 billion of the stimulus money has been spent so far. That begs the question: Why spend 70 percent of the money next year when the recovery will be fully under way?

"If there is any way we can claw some of it back, it makes a whole lot of sense to reduce our debt than spending it as quickly as we can," said Republican Sen. Jim DeMint of South Carolina.

The chances of that idea being adopted in this Democratic Congress are slim to none because much, if not most, of the money isn't for any short-term stimulus, although it was originally sold as that. It's part and parcel of the Democrats' agenda to expand hundreds of federal grant programs for their favored special-interest constituencies.

"Part of the $800 billion wasn't really temporary stimulus," said economist Alice Rivlin, former budget director in the Clinton White House. "It was investments in infrastructure, education, health, information technology, etc., that we need to have a more productive economy in the longer run. The case for these investments isn't affected by quick recovery, even if it happens," Rivlin told me.

There has been an enormous amount of exaggeration by the Obama administration about the number of jobs being created by the spending stimulus. But the American people seem to understand that Obama's massive spending scheme isn't performing as he said it would and that it should be stopped.

The Federal Reserve expects the recession to end sometime later this year, but the stimulus program will continue on -- spending the lion's share of its funds in 2010 and on into 2011 for no legitimate reason.

We are fast approaching the point where it will be time to pull the plug on what has turned out to be a non-stimulus spending program that has done more harm than good.