History Points to GOP Gains in 2010 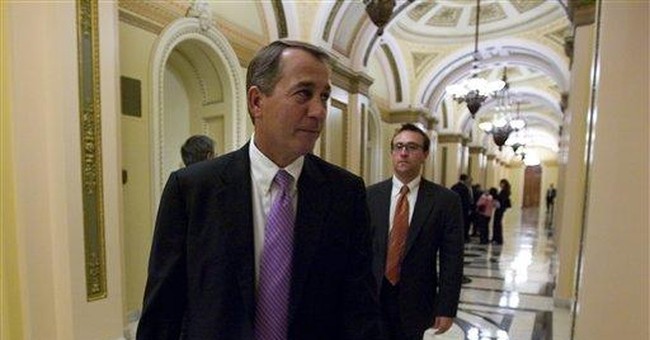 WASHINGTON -- Signing the Republican Party's post-election death certificate is risky business, but Democratic strategist Simon Rosenberg did so last month -- predicting the GOP will remain in the political graveyard for many years to come.

Perhaps one can forgive the head of the New Democrat Network (NDN) a moment of irrational exuberance when you consider that until Barack Obama's decisive victory, Democrats had won just three of the previous 10 presidential elections. Simon has suffered a lot of Democratic defeats, so when his party scored big on Nov. 4, well, let's just say his euphoria flowed over the top.

"Absent huge Democratic mistakes in the next few years, the Republican Party's road back could very well be a long one," he wrote in the GOP's obituary.

"Their coalition no longer works in the changing demography of the day, and is dangerously old; their Southern strategy, so critical to their ascension, has become a relic of the past; their tech and media tools have not kept up with the times; their ideas have become spent and discredited; their leaders, particularly in Washington, seem content to ankle bite rather than lead. They are an aging and frayed bunch, living off the fumes of a day and politics gone by," he said. Phew! That's quite a mouthful. But the wish may be father to the thought. As Winston Churchill once said, "In war, you can be killed only once, but in politics, you can be killed many times."

Many Democrats have predicted the Republicans were finished after some devastating defeats, only to see them quickly recover and win again.

No one gave the Republicans a snowball's chance in hell after Lyndon Johnson crushed Barry Goldwater in a landslide in 1964. Democrats said the GOP was finished, perhaps for a generation. But the Democrats' archenemy, Richard Nixon, took back the White House in 1968 and won re-election in a landslide four years later.

Then came the Watergate scandals that pundits said would sweep the Democrats into power by a landslide in 1976, but Jimmy Carter defeated Gerald Ford by an eyelash, though the elections swept an army of Watergate Democrats into Congress.

Democrats said the Watergate scandals had consigned the Republicans to the wilderness for many years to come. In their dreams. Ronald Reagan rode out of the West four years later to easily beat Carter and recapture the White House for the GOP, which made significant gains in Congress.

But Rosenberg and his fellow Democrats think this time it's going different. "I really believe there is a strong argument to be made that the GOP is further from power, more discredited and more out of touch with the American people than any time since the days of FDR and Truman," he wrote in his coroner's report.

Well, maybe not. In politics, timing is everything. It can work for you or against you. Barack Obama was running in a perfect storm that gave his candidacy three things that would have swept any challenger to power: a deeply unpopular president, an unpopular war in Iraq and an economic catastrophe of a very high order.

But his presidency still remains a high-risk work in progress. He is one of the most inexperienced presidents in U.S. history. Economists say his Old Deal, pump-priming, big-spending prescriptions for economic recovery haven't worked anywhere. He is about to enter the White House at a time when global terrorism is flexing its muscles and plotting to strike again.

The Republicans, meanwhile, are going back to square one, focusing on controlling spending, reducing the size of government, and cutting tax rates to get the engine of the economy running again.

The 2008 election resulted in a change in administrations, but recent polls show it didn't change the nation's ideological balance, which is still very much right of center.

A post-election Pew poll finds that while the Democrats' advantage in party identification has risen, "the share of Americans who describe their political views as liberal, conservative or moderate has remained stable."

Pew says that just one of five Americans say they are liberal (21 percent), while 38 percent call themselves conservative, and 36 percent say they are moderates -- a ratio that has remained unchanged over the past eight years. "For the GOP, it sure looks like a long road back," Rosenberg said in his celebratory analysis.

But it may not be as long as he thinks. About a year from now, we will be in the beginning stages of the midterm-election cycle when the political history books tell us that the party in power almost always loses seats in Congress. That record has been broken only twice in our history. The last time was in 2002 when President Bush was riding high, the Republicans had cut tax rates across the board, and the GOP made substantial gains in Congress.

The chances are extremely high that the GOP will gain congressional seats in November 2010, dealing Barack Obama the first political defeat of his presidency.