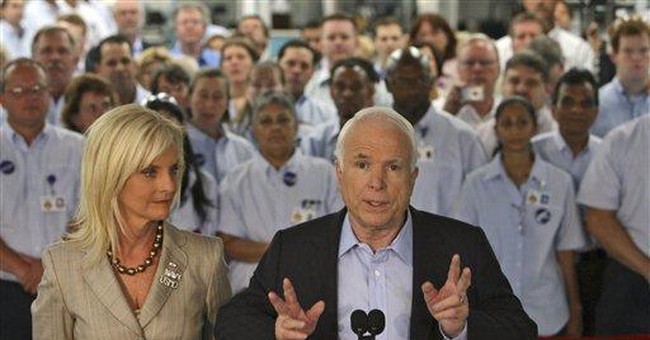 WASHINGTON -- When Democratic leaders shut down Congress last week for the rest of the summer to avoid dealing with record oil and gas prices, they may have committed the biggest political blunder of the 2008 elections.

What they didn't expect was that many Republican House members would not leave town without addressing the hottest national issue in this year's presidential and congressional campaigns.

Instead of quietly acceding to Speaker Nancy Pelosi's stubborn refusal to take up a comprehensive energy bill to deal with punishing $4-a-gallon gas prices, a gang of Republicans refused to follow Democrats home for a five-week vacation. They gathered on the House floor Monday to continue a protest that began spontaneously Friday to denounce Pelosi's action.

Her rigid, iron-fisted decision appears to have boomeranged on her party -- making it appear insensitive to the plight of ordinary Americans struggling under the yoke of budget-crushing gas prices while Democratic lawmakers bask in the luxury of more than a month off, a vacation most workers can only dream about.

Handling the gas-price debate with remarkable political dexterity, the Republicans have shoved the Democrats on the defensive and seized the high ground on the No. 1 economic issue of the year. And they did it by demanding what most Americans want: a vote on a bill to lower gas prices by boosting oil exploration and production.

Meeting Monday in the Capitol by the Will Rogers statue, the American humorist who ridiculed Congress as bumblers and bunglers, Republicans plotted a week of protests on the House floor. They have followed through, blasting the Democrats for skipping town without taking up a pending energy bill.

The Democrats have "shuttered the U.S. House of Representatives for a five-week vacation while ignoring the No. 1 issue weighing down our economy and the budgets of American families -- high gas prices," said Minority Whip Roy Blunt of Missouri.

And it wasn't just the Pelosi Democrats who found themselves under a barrage of political fire on the issue. Barack Obama was being pounded this week by John McCain for not demanding that his party return to take up an "all of the above" energy bill that would reduce oil prices and lower the cost of gas here at home.

"And anybody who says that we can achieve energy independence without using and increasing these existing energy resources either doesn't have the experience to understand the challenge we face or isn't giving the American people some straight talk," he said.

The GOP's double-barreled offensive is beginning to make Democrats squirm. With Obama's numbers shrinking in key battlegrounds, including Ohio, Michigan, Colorado and Florida, the Illinois senator conceded last week that he would accept some offshore drilling as part of an energy bill. In a surprising turnaround in Lansing, Mich., on Monday, he hastily proposed dipping into the strategic petroleum reserves (an old bromide that never works).

Voters seem to sense that his proposals will do nothing to reduce gas prices. Alternative sources of energy like wind, solar and biofuels will not fill your tank. More $30,000 hybrid vehicles and a $7,000 tax credit may be fine for the Chablis-and-brie set, but they are beyond the pocketbook of working-class voters who are hurting the most.

Clearly, the GOP's relentless pounding on the energy issue is drawing Democratic blood, boosting voter polls in behalf of the GOP's pro-drilling proposals, and forcing Obama to abandon positions of his environmental supporters. "It's so disappointing to see Obama now say he would consider expanding offshore drilling," Friends of the Earth president Brent Blackwelder testily said in a statement this week.

Most Republicans were home in their districts this week, flogging the Democrats for inaction on gas prices while several dozen rear-guard Republicans were coming to the House floor each morning, demanding vacationing Democrats to "get back to work."

At the same time, the McCain campaign and the Republican National Committee were saturating the Internet with ads showing Obama telling an audience that "simple" answers to the gas crisis included inflating your tires and getting a tune-up. What's next? Remove the spare to lighten your car's load?

Reporters on McCain's campaign plane were being given tire gauges with the words "Obama energy plan" stamped on them.

"I really sense we are at a tipping point in our country on this issue," said Republican Rep. Mike Pence of Indiana.

But something more damaging is going on here. Democrats fled town because they do not want a vote on the Republicans' proposal to repeal the ban on offshore drilling -- a vote Pelosi and her friends know they will lose and that the anti-drilling environmentalist lobby vehemently opposes. Democrats are perfectly happy with the way things are because they believe voters will blame the Republicans, and that will help them win the elections.

But in the end, this issue threatens to hurt the Democrats with the base of their party. Republicans are going to keep the heat on, and working-class voters are only going to get angrier as they stand at the pump and see their gas bill rise dollar by dollar.

Increasingly, the Obama Democrats are being seen as the problem, not the solution.