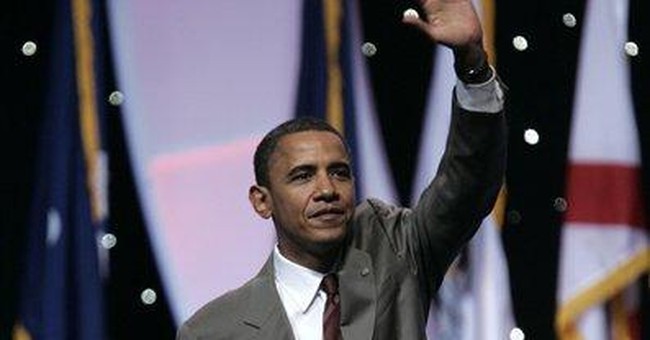 WASHINGTON -- About a week ago, I reported in this column that a top defense adviser to Barack Obama was proposing that a large "residual" U.S. military force remain in Iraq under his mercurial troop-withdrawal plan.

The freshman Chicago Democrat pooh-poohed such reports at the time, saying those who accused him of changing his position on pulling out all U.S. combat forces from Iraq "haven't apparently been listening to me."

But in an op-ed column in Monday's New York Times, Obama said he will leave behind "a residual force in Iraq" that would carry out a number of missions, including going after al-Qaeda insurgents, defending remaining U.S. servicemen left behind and training Iraqi security forces.

It is hard to follow the swiftly changing positions in his troop-withdrawal plan, but at last count, it has gone from removing all U.S. military forces to all "combat forces" to his most recent position: Pulling out most combat forces with an apparently undetermined number of brigades left behind for the foreseeable future.

In my earlier column, I reported that Obama's national-security advisers were dropping hints that his redeployment plan would be more flexible and gradual than his earlier calls for a complete pullout, regardless of the combat situation on the ground.

The biggest hint came from Colin Kahl, assistant professor in the Security Studies Program at the Georgetown School of Foreign Service, who is the chief coordinator of Obama's working group on Iraq policy. The group's job has been to write policy papers that would form the basis of his withdrawal plan. But in several policy papers and memos, Kahl disagreed with Obama's exuberant rhetoric for a total withdrawal.

"Rather than unilaterally and unconditionally withdrawing from Iraq and hoping the international community will fill the void and push the Iraqis toward accommodation -- a very unlikely scenario -- the United States must embrace a policy of 'conditional engagement,'" Kahl wrote with former National Security Agency director William E. Odom in the July/August issue of Foreign Affairs.

"This approach would couple a phased redeployment of combat forces with a commitment to providing residual support for the Iraqi government if and only if it moves toward genuine reconciliation," he said.

Kahl told me in a phone interview that his views did not represent the campaign's position. But he expressed similar views in other confidential papers for the campaign, and advisers said they have come to reflect the senator's "emerging thinking" on how to make a troop-withdrawal plan work without leaving the Iraqis at the mercy of a renewed insurgency.

Contrary to Obama's pledge to his antiwar base, Kahl's position papers talked of leaving behind "a sustainable over-watch posture (of perhaps 60,000 to 80,000 forces) by the end of 2010 (although the specific timelines should be the byproduct of negotiations and conditions on the ground)."

In his New York Times column, Obama says nothing about the size of the "residual" military force he would leave in Iraq for the short term. His liberal base is already grumbling about signals that he is softening the pace of his withdrawal, which he says would be made in consultation with the U.S. military commanders on the ground and Prime Minister Nuri Kamal al-Maliki. But in an op-ed filled with contradictions, Obama grudgingly concedes the military surge he opposed -- and predicted would fail -- has worked. Still, he persists in his intention to pull out under a 16-month timetable in the midst of winning the war.

Obama knows he cannot afford to further inflame his base, which is already outraged by his embrace of Bush's terrorist surveillance bill, gun rights, Bush-light faith-based programs and other moves toward the center.

The Democratic left has been breathing down his neck for weeks over suspicions he will abandon them on Iraq once he is elected. Long before his recent policy flip-flops, liberals sensed his withdrawal plan was not all it was cracked up to be.

"What he is offering is a basic vision of withdrawal with muddy particulars ... destined to meet an even muddier reality on the ground," wrote New Republic senior editor Michael Crowley in May.

"When it comes to Iraq, whatever the merits of Obama's withdrawal plan may be, 'Yes, we can' might ultimately yield to 'No, we can't,'" Crowley said then.

Indeed, Obama has spun from pulling all the troops out as quickly as possible to writing in the Times Monday that he hoped combat forces would be out by the summer of 2010, but with residual forces remaining behind just in case -- a breathtaking change in positions.

But his "refined" policy comes with a number of other caveats, such as, "In carrying out this strategy, we would inevitably need to make tactical adjustments." What does that mean? His advisers think it means keeping more troops in Iraq than he wants to admit right now.

Indeed, unlike his shoot-from-the-hip style in the primaries, he talks now about making sure that "our interests (in Iraq are) protected."

Breaking faith with voters who nominated him is hurting his candidacy. A Washington Post poll this week found voters split on setting a timetable for withdrawal, with John McCain edging out Obama 47 percent to 45 percent on who would better handle the war.

A Newsweek poll now shows the Arizona Republican leading among independents by 41 percent to 34 percent. A month ago, Obama led 48 percent to 36 percent.