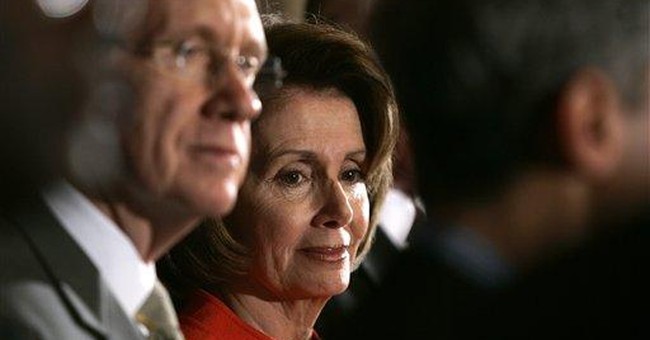 WASHINGTON -- Congress went on a Christmas spending spree over the holidays for its friends in high places. You'll be getting a bill for it by April 15.

While families were buying stocking stuffers for the kids, the Democratic Congress was stuffing billions of dollars of pork into a grotesquely bloated omnibus appropriations bill.

This column looked into some of the wasteful squandering as the end-of-the-year spending bill was moving through the legislative process. But new details of its scandalous spending practices demand greater attention. A word of warning though, to those who have high blood pressure: read this sitting down.

Next time you go out for seafood, remember the $188,000 lawmakers sent to the Lobster Institute in Orono, Maine. Then there was the tidy sum to the pest-control industry in the form of $2.5 million to fight grasshoppers and Mormon crickets in Nevada and Utah; $223,000 to manage beavers in Raleigh, N.C.; $3.7 million to combat termites in New Orleans; $244,000 to conduct bee research in Weslaco, Texas.

Congress, which spends millions battling roaches and rodents in the Capitol, has a thing about bugs. It can't spend enough on them: $353,000 to battle the Asian long-horned beetle in Illinois; $234,000 to help an American laboratory in Montpellier, France fight the olive fruit fly; $113,000 to go after rodents in Arkansas.

This is just a sampling of the 11,331 "earmarks" (a 426 percent increase over last year) that this Congress snuck into its annual appropriations bills and accompanying reports for fiscal year 2008 -- nearly 10,000 of them in the omnibus bill alone. Want more?

-- $1 million for a river walk in Massachusetts.

-- $2.4 million for renovations in the Haddad Riverfront Park in Charleston, W.Va.

-- $250,000 for construction work at the Walter Clore Wine and Culinary Center in Prosser, Wash.

-- $10.4 million to the ProLogic company, a firm in West Virginia that is allegedly under federal investigation.

If one special interest in the country has been left out of these bills, it would be hard think of one. It contains money for everything from New York's Center for Grape Genetics to peanut production in Georgia, from

Keep in mind, these are projects that the administration did not request money for, nor were they recommended or formally evaluated by any of the appropriating committees. These are items that were inserted into spending bills, with the full approval of the majority leadership of Congress, to buy political support in their states and districts to help them win another term in the 2008 elections.

To be sure, earmarking is a bipartisan affliction. Its abuses occur on both sides of the aisle. Nevertheless, powerful Democrats in Congress control the legislative machinery and they are among its chief abusers.

And don't look for any substantive change from the Democrats who are running for president. Since her election to the Senate, Hillary Clinton has been responsible for more than half a billion dollars in earmarks that went to 59 corporations, according to a Los Angeles Times investigation. Nearly two-thirds of these firms donated money to her campaigns through their executives, board members or their lobbyists.

In a classic case of mutual back-scratchery, her campaigns have raked in more than $1 million from beneficiaries of her earmarks. Clinton has delivered more than $2.3 billion in earmarked pork to her state since 2001. She's not the biggest abuser of pork, though she "does significantly more earmarking than most others," the Times discovered.

Among the spending bills that passed this year, she was responsible for 216 earmarked projects totaling $236.6 million. So much for her claim of fiscal responsibility.

Her rivals for the Democratic presidential nomination are tucking into the hog meat, too. Barack Obama, promising to change the way things are done in Washington, is responsible for $90.4 million in earmarks.

President Bush presumably had little choice but to hold his nose and sign the omnibus spending bill to keep the government running. But he has asked Budget Director Jim Nussle to come up with innovative ways not to spend this money.

The Heritage Foundation has three suggestions, which the White House is studying: Cancel non-binding earmarks by executive order; ban "phone-marking," in which lawmakers pressure agency heads to demand funding for their pet projects; and rejecting vaguely worded earmarks.

Good ideas. It's time for the White House to take the gloves off and get tougher with lawmakers who won't take no for an answer.