At recess, Bush still head of the class 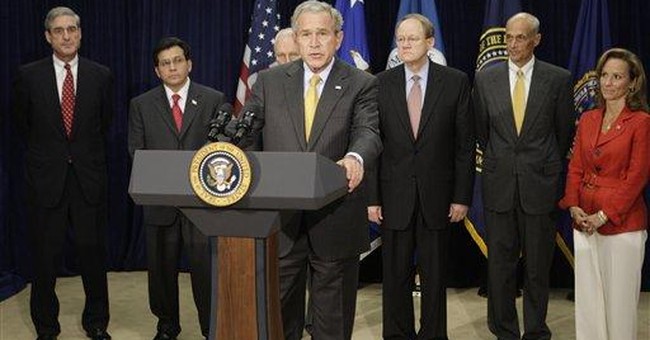 WASHINGTON -- Congress has recessed for the month of August and, as an 18th-century critic once said, our liberties and fortunes are safe for the time being.

The so-called full-time legislature departed for their annual, monthlong, paid vacation with its Democratic leaders crowing about its achievements. But their mediocre midterm record, with all of their political hyperventilating aside, shows they accomplished little and left behind a pile of pork-filled appropriations bills, a mountain of unfinished work on problems ranging from energy to health care and a poisonous political atmosphere. "The president has signed virtually nothing because virtually nothing has gotten to his desk," remarked Missouri Rep. Roy Blunt, the second-ranking House Republican.

This doesn't mean they haven't been busy. A high percentage of the bills they passed were to name post offices after VIPs -- at least 15 of them by my count.

Much of its time has been spent on politically motivated congressional investigations, better known as fishing expeditions -- more than 300 by last count. Their targets: the administration's warrantless intercepts of terrorist communications, President Bush's dismissal of nine U.S. attorneys when their terms had ended and whether the attorney general had broken any laws or ethical rules in carrying out the White House's law-enforcement priorities.

Subpoenas were issued for the president's closest aides and advisers, in violation of the separation-of-powers doctrine. Threats were hurled at them about perjury, contempt of Congress and worse. But after the smoke cleared, the Democrats had failed to turn up a shred of evidence that anyone had broken any law.

The spectacle of the Democrats playing politics with the reins of power to gain an advantage in the 2008 elections was not what voters had in mind when they put them back in charge of the House and Senate. Their public-approval rating plunged as a result, below even Bush's low ratings.

This is not to say the Democrats didn't enact anything. They did pass a small handful of important bills, but only after accepting Bush's objections to them. Indeed, the White House won most of the major legislative battles of the year.

The first minimum-wage increase in a decade passed early in the year. It's a dubious proposal that will eliminate entry-level jobs, but Bush insisted that it contain offsetting small-business tax breaks, something Democrats were loath to do. They eventually caved to White House demands.

The Democrats promised to implement all remaining 9/11 Commission recommendations, but pulled back from that pledge, too. Bush got most of the changes he wanted, and the bill, including screening of all air cargo, has become law.

Despite the Democrats' fire and fury over Bush's warrantless spying on terrorist communications, he got what he wanted there, too, albeit for six months. The ACLU Democrats fought it tooth and nail, citing privacy rights, but fearing they would be tagged as soft on terrorism in 2008, the bill flew through both houses and Bush happily signed it this week.

The Iraq war and the Democrats' efforts to legislate a troop withdrawal dominated Congress' attention for much of the past year, but here again Bush won every round. The House upheld his veto of a war-spending bill that contained a pullout deadline, as political pressure mounted on them to fund our troops in harm's way.

Under relentless pounding by Bush and the Republicans, Democrats were forced to pass a clean bill in May to finance the war, without any withdrawal timeline. The cave-in outraged the Democrats' antiwar, appeasement-at-any-price foot soldiers, and Democratic support plunged in the polls.

A sweeping ethics- and lobby-reform bill also was sent to the president's desk.

Other bills at various stages in the legislative process face veto threats: an energy bill that raises taxes on the oil industry but produces no new energy; a health-care assistance bill that also covers middle-class children; a $20 billion, over-budget water-projects bill; and a budget-busting farm-subsidy bill.

A line of appropriations bills are stacking up for Congress' return, and the White House suspects that, in the end, Democrats will send Bush a fat omnibus spending bill and dare him to veto it. Senior presidential aides told me that's exactly what the president will do if it exceeds his spending limits.

Meantime, the past seven months of Democratic rule have been anything but super-productive. Nor have they been united over the war on terrorism -- even on whether or not it should be called a war.

They certainly haven't improved the tone and temper of congressional deliberations. Civility is at its lowest ebb ever in both chambers. A partisan maneuver last week that smacked of dirty tricks cut short a House roll call on a Republican amendment that ended the voting before all votes were cast. GOP lawmakers stormed out of the chamber crying "shame, shame."

The Democrats' strong-arm tactics and political meanness raises further doubts about their performance thus far, posing this question for the voters in 2008: Can they govern?