Big money not a harbinger of victory 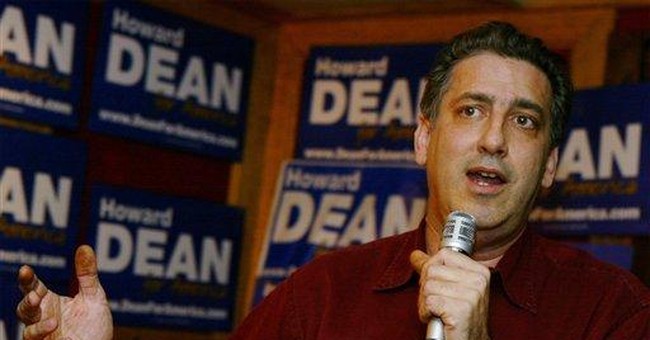 WASHINGTON -- The excessive attention being paid to the huge sums of money raised by the Democratic presidential front-runners overlooks an important irony in recent political history: The best-funded candidates often lose in the early caucuses and primaries.

Ask Joe Trippi, former Vermont Gov. Howard Dean's campaign manager in the 2003-2004 presidential election cycle. Dean was far and away the high fund-raiser in 2003, which made him the prohibitive favorite for the nomination. At least that's what the national press corps believed and reported.

By the end of the fourth quarter of 2003, just days before the Iowa caucuses, Dean had raked in $14 million more, while cash-strapped Sen. John Kerry reported raising an anemic $2.5 million. But Kerry trounced Dean in back-to-back contests in Iowa and New Hampshire and went on to win the nomination.

This is the cautionary tale being discussed in backrooms by campaign strategists for some of the second-tier Democratic hopefuls, and by many election analysts and fund-raisers. They think that the Washington press corps has exaggerated the importance of big money at this early stage of the campaign. "Historically, the amount of money raised in the pre-primary cycle has not been a good indication of who wins the nomination," Trippi told me.

An adviser to former North Carolina Sen. John Edwards' presidential campaign, Trippi hopes that the Democrats' 2004 vice-presidential nominee will turn out to be one of those come-from-behind surprises. Edwards has been stuck in third place for months in all the national polls but remains a serious contender. Still, there's a lot of historical evidence behind Trippi's point.

The year before the 2004 campaign officially began, Democratic Sen. Joe Lieberman of Connecticut, the party's 2000 vice-presidential nominee, led in all the early polls and Dean was breaking all money-raising records over the Internet. But both of them were abysmal failures in the primaries.

"Why does money draw so much attention by the press? They can only report on two things at this early juncture -- polls and who's winning the fund-raising race, neither of which, by the way, is a good indicator of who wins," Trippi said.

Perhaps the classic example of this belongs to Jimmy Carter's former vice president, Walter Mondale, who by the end of 1983 had raised $9.4 million and led in all the polls. "But a guy by the name of (Colorado Sen.) Gary Hart, who had a message and not much money at all, beat him in the primaries and actually won more convention delegates," Trippi said. If party bigwigs had not corralled the unpledged super-delegates on Mondale's behalf, Hart would have been the nominee.

Veteran Democratic campaign fund-raising consultant Mike Lux voices similar doubts about the strategic importance of money this early in the campaign. "I do think that the role of money is exaggerated," Lux said. "Since 1972, when the presidential-nominating process was opened up to the primaries, the person with the most money in the early going has not gone on to win. It's overrated. "What presidential candidates need in the campaign cycle right now is enough money to run a strong enough campaign in Iowa and New Hampshire, and beyond that, if they do those two things well, momentum can take them the rest of the way," he said.

"This is not to say these strategists believe that money is irrelevant in who wins next year's caucuses and primaries," Lux went on. "Rather, they argue the amount of money raised this early in the two-year marathon race is not a reliable basis on which to forecast whom will be the strongest candidate next January."

"Is there someone out there who really thinks second-quarter fund raising -- or even third-quarter numbers -- have a great predictive value in guessing which candidates will win the nomination?" asked campaign analyst Stuart Rothenberg.

Steve Grossman, who chaired the Democratic National Committee during Bill Clinton's presidency, cautioned, "Money is clearly relevant to competitiveness and the perception of competitiveness. Yet there are lots of examples of people who have trumped their opponents in the money race but failed to do it at the ballot box."

Even so, the Democrats' heavy money is betting on Illinois Sen. Barack Obama, who has raised a total of $58.5 million, followed closely by New York Sen. Hillary Clinton with $52.5 million. Edwards lags with $23 million. But even at this early date, the folks in Iowa, where Edwards has the edge in most polls, are not impressed with the big money.

Grossman, a Massachusetts businessman, is supporting Clinton, whom he believes will be the party's nominee. Nevertheless, he "would not rule out somebody else catching fire and creating a surprise" in next January's first four contests.

The reason for this added caveat: The last presidential candidate he backed was Howard Dean.