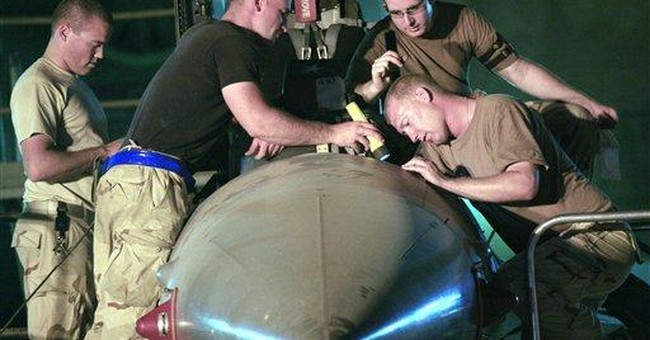 WASHINGTON -- The war against Islamic terrorism in Iraq is still a work in progress, but a few strategic victories in the past few months suggest the forces of freedom may be making some headway there.

American and Iraqi forces have cleared several terrorist-infested areas, including Anbar province. Large swaths of Baghdad have also been made safer as a result of the surge of U.S. troops.

"The level of violence is down in the two areas where the 'surge' is focused, Anbar and Baghdad," U.S. Ambassador Ryan Crocker said last week. There have been numerous reports that tribal sheiks in Anbar and elsewhere have begun forming alliances with Iraqi and U.S. military forces for the first time, identifying terrorist locations and weapons caches and the places where Al Qaeda killers have planted roadside bombs.

Perhaps the most important evidence the surge is having an effect is the fact that the terrorist attacks have declined or stopped in the areas where U.S. forces have focused their enforcement efforts.

Since President Bush initiated the surge earlier this year, Al Qaeda has stepped up its attacks in some places. But overall, sectarian killings, total car bombings and suicide attacks have fallen in May and June.

"I know it's argued by some people (i.e., Democratic war critics) that they provoke the violence. I simply don't believe that to be in the main true. I think it's a much larger truth that where American forces are present, they are inhibiting sectarian violence and they are going after the people, particularly Al Qaeda and the Shiite death squads, who are provoking that violence," Burns added.

There are signs that the surge has produced dividends in other areas of Iraqi governance and society. Recruitment for the Iraqi army and police forces is way up, attracting thousands of Iraqi men, including Sunnis. We are seeing the reappearance of professional soccer leagues in Baghdad, as well as new reconstruction projects in larger numbers.

There was another important victory in the Iraq war here at home, too, where the Democrats' efforts to force a pullout was soundly defeated in the Senate, falling eight votes short of the 60 needed to end debate and move to a vote. In addition to showing that a majority of GOP senators continue to back Bush's opposition to a troop-withdrawal deadline, it also gave him time to show that the military surge can and will bring some level of security to Iraq as the Iraqis prepare to take over the brunt of the fighting sometime next year.

Another key development in a battle that appears to be shifting in Bush's favor was the sharp public contrast between the Democrats -- who argued that all hope of saving Iraq is lost and we should begin pulling out now -- and those who say that leaving now would only embolden Al Qaeda, free them to expand their terrorist plots elsewhere, including here in the United States, and inevitably lead to a bloodbath for the Iraqi people.

Burns says it is "incontrovertible that the most likely outcome of an American withdrawal any time soon would be cataclysmic violence."

But in the closing hours of an all-night debate on their troop-withdrawal amendment, the Democrats were hardly thinking of what would happen to the Iraqis if we told Gen. David Petraeus and his high command to end the surge and prepare for a pullout of U.S. forces now.

Instead, the Democrats were calling on the Iraqis to begin negotiations with all parties in the country, presumably including Al Qaeda leaders, to reach some kind of "political settlement." That approach not only smacks of appeasement but it could lead to the kind of bloodbath that Burns and our military leaders in Iraq have warned would be the inevitable result if we just left.

It was the kind of cold-blooded appeasement that even the Washington Post -- whose military reporters have been unrelenting in their criticism of the war -- could not stomach.

"Before Congress begins managing rotation schedules and ordering withdrawal, it should at least give those generals the months they asked for to see whether their strategy can offer some new hope," the Post editorialized.

Last week's Senate vote bought Bush and Petraeus the additional time they need to make that hope a reality.