The return of Billary 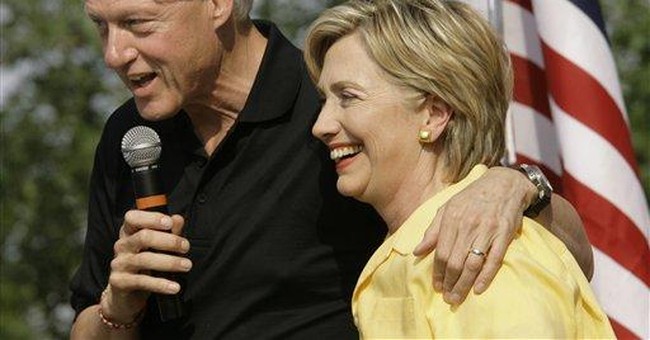 WASHINGTON -- As Bill and Hillary Clinton were campaigning in Iowa last week to put themselves back in the White House, a Democratic strategist warned their two-for-one strategy had trouble written all over it.

Dropping any pretense she is seeking the presidency in her own right, Hillary and her husband, former president Bill Clinton, campaigned arm in arm together in a Fourth of July swing through the first caucus state. The New York senator "embraced the role of virtual incumbent ... promising to restore conditions -- in the economy and in the government -- to the way they were during her husband's administration," the Washington Post's Anne Kornblut reported last week.

At a rally in Waterloo, the Clintons were introduced as "the once and future presidents," and Democrats saw in their joint appearance that they had made a calculated decision to run as co-presidents seeking restoration of the Clinton dynasty.

But even before the Clintons had set foot in Iowa, Donna Brazile, the longtime party official who managed Al Gore's presidential campaign in 2000, issued a blunt warning that their strategy could be a political disaster for the Democrats in 2008.

Bill Clinton's active campaign role in her wife's bid for the presidency could "end up doing more harm than good," Brazile wrote last week in her widely read column in Roll Call, the Capitol Hill newspaper.

"With Bill on the stump for anything other than fund-raising, the message becomes 'Restore the Clinton Regime -- Things Were Better Then," she said. "Not only does that undercut her candidacy by making voters question which Clinton they are electing, it repositions the campaign in the decidedly wrong direction: looking backward," the veteran party insider added.

Illinois Sen. Barack Obama, and Hillary's strongest rival, who also was campaigning in Iowa at the same time, pounced on the "backward" theme in Brazile's column.

While praising Bill Clinton, who remains wildly popular in his party, as a "terrific political strategist," Obama criticized the Clintons' strategy and, in a thinly veiled reference, seemed to remind Democrats of the deep divisions the Clinton administration had spawned through eight years of scandals. "What we're more interested in is looking forward, not in looking backward. I think the American people feel the same way. What they are looking for is a way to break out of the harsh partisanship and the old arguments -- and to solve problems," the freshman senator told the Associated Press on the campaign trail. Several motivations went into Hillary's decision to bring her husband into the campaign at this early juncture in the nomination race.

The first is her weakness in Iowa, where former senator John Edwards of North Carolina, her party's 2004 vice-presidential nominee, continues to lead among Democrats. That sets up a loss in the first contest of 2008 that could cut into her front-runner status, opening up a narrow window of opportunity for her nearest rivals.

The second is her persistently high negatives, as measured by polls that ask voters whether they have a favorable or unfavorable view of each of the candidates. Her unfavorable scores are in the mid-40s nationally, but climb close to 50 in several battleground states, raising fears about her electability.

Brazile, who has staked out a new role in her party as an independent voice who knows more about minority turnout than anyone, has the heft to criticize her party's front-runner without alienating its base. And her criticism rippled through Democratic Party ranks last week with the speed of an e-mail message. She sought to disabuse Hillary's strategists of the notion that Bill can be the winning factor in her campaign. On the contrary, he can help raise a lot of money and perhaps even boost voter turnout a little, but he cannot win the election for her, Brazile said.

"In the end, it's all about Hillary Clinton -- not the other Clinton," she said. Then there is Hillary's posture as a Washington insider who is part and parcel of the government's establishment. That is not a good position to hold at a time when voters want someone to come in from the outside to sweep out the old established order.

"All signs point to voters electing an experienced outsider to take control of Washington -- an area Bill Clinton won't be helpful," Brazile said. "She must inspire us to win and show us that she can lead us out of this dismal state of gridlock. If she can't do that on her own, then no one, not even Bill, can save her," she said.

Last week, Hillary seemed to be sending a message that she can't do it on her own, that her husband will be helping her make the decisions and that the "change" she wants is to restore both of them in the presidency.

Brazile, a Democrat who is tightly plugged into the party's base, thinks that kind of campaign would be the kiss of death for the Democrats in 2008. Obama thinks so, too.