Bush Will Stand the Test of Time 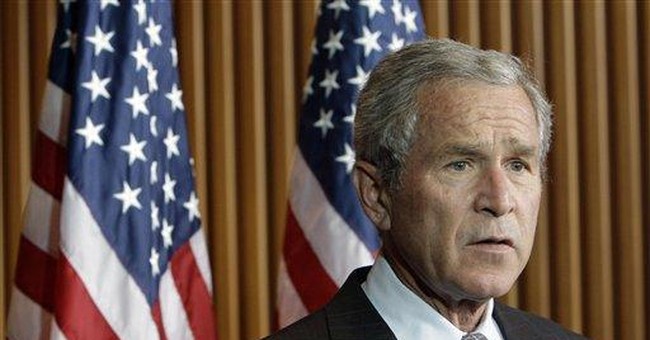 WASHINGTON -- With all the talk about President Bush's failed legacy by the nattering nabobs of negativism, one might think he won't have one.

Actually, he has cut a wide and often determined swath in the troubled course that history has dealt him, with 9/11 defining his presidency and the war-footing decade in which he has governed. Other big events, from the wars in Afghanistan and Iraq to several very large domestic initiatives he started and implemented, will have positive repercussions long after he has left office.

Perhaps it is a bit premature to talk of his legacy at this juncture in the twilight of his two-term presidency, because we cannot foretell the future. No one can say with any certainty what the last year and a half of his second term will hold, or whether the events that follow his presidency will vindicate his decision-making.

While the terrorist attacks in New York and Washington marked the first year of his presidency, his historic legacy will be about what he did in the aftermath to keep that from happening again -- at least on his watch.

He struck back at the Al Qaeda terrorists who once had a safe haven in Afghanistan, killed or dispersed their Taliban allies and leaders, replaced their government in Kabul with a pro-Western regime. The Taliban armies resumed their attacks but the democratic-elected government will be there for years to come, defended by U.S. and NATO forces as the anti-terrorist struggle continues.

Bush's four-year war in Iraq has deeply divided Americans as the U.S. death toll mounts in the face of a furious guerrilla war that shows no signs of abating. Its eventual outcome is an uncertain one as we wait to see if the increase in U.S. forces can show some security improvements there.

But whatever happens on that score, Bush's decision to invade Iraq -- toppling its terrorist government and installing a democratic government that I believe will outlast its enemies -- will remain a significant achievement of his presidency.

Five, 10 or 25 years from now, if that system of government still stands, whatever its internal problems and challenges, it will be seen as a major geopolitical change in a region marked by despotism and instability. And Bush will be seen as the leader who brought about that change.

The other national-security legacy of his presidency, as of this writing, will be on the broader global war against terrorism and the steps he took in the aftermath of 9/11 to keep our country safe; he also sounded the clarion call to the world to declare war on terrorism.

Bush is an admirer of Winston Churchill, who, in his years out of power, was a lone voice in Great Britain that warned of the Nazi threat against his island nation. Churchill's warnings went unheeded until the Germans were toppling countries in Europe while, as one critic said, England's pacifist leaders "were weekending in the country."

Like Churchill, Bush has been warning of the growing terrorist menace (manifested anew last week in Great Britain), while many in the Democratic opposition complained that the domestic security steps he took to prevent future attacks went too far.

But the steps he took to defend our homeland -- the Patriot Act, beefed-up defenses and satellite surveillance to spy on terrorists and their cells in this country -- have kept us safe. This, too, will be one of Bush's legacies, one that will loom even larger if, God forbid, the next president lowers our guard and we are attacked again.

In domestic matters, he took risks and had some spectacular failures, but the ones that succeeded will likely be with us for years to come.

His proposed Social Security investment accounts and his initial idea of a guest-worker migrant program were blocked on Capitol Hill, but there's no doubt in my mind that both will be reconsidered in the future long after he has left office.

Other proposals that were enacted will be a big part of his legacy: the tax cuts that prevented an economic collapse in the wake of 9/11, financial scandals and Katrina; and, most certainly, the addition of two conservative jurists, John Roberts and Samuel Alito, to the Supreme Court who have tipped its decisions sharply to the right (something that Ronald Reagan was unable to do).

Two other initiatives on education reform and lower prescription-drug costs for the elderly, both of which are disputed by their critics, will be with us for a long time as well.

I was not a supporter of the enlarged role of the federal government in our schools, but the latest data show higher test scores and achievement levels. The market-based drug program has proven to be popular and, in a surprise to everyone, much less expensive than was forecast.

In an era of nonstop polling and 24/7 news, we judge our presidents on a week-to-week, month-to-month basis, and then, when they have left office, we judge them again from a longer perspective.

When that measurement comes, I think Bush is going to stand the test of time.