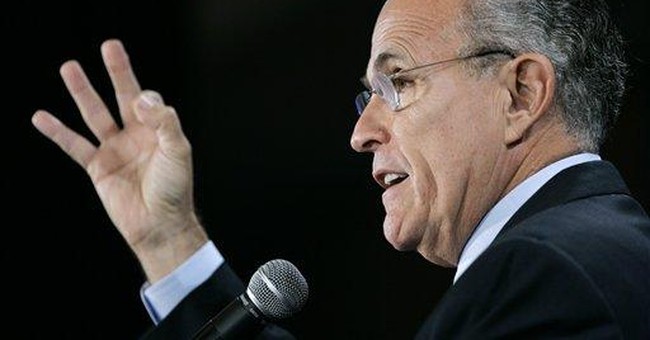 In the race for the Republican presidential nomination, the competition among the top contenders to sign up economic heavyweights has been fierce, as each candidate strives to stake out the toughest budget and tax-cut policies to win the hearts of the GOP's conservative base.

Certainly Anderson, a senior fellow at Hoover, Reagan's closest policy adviser and, now, chief biographer of the Reagan legacy, adds professional prestige to Giuliani's team that includes a number of other top conservatives. Among them: former presidential candidate and magazine publisher Steve Forbes, who has championed the flat tax and private Social Security investment accounts.

While debate in Washington has been dominated by the immigration battle, reining in spending and slaying the tax monster are still the core issues at the party's grassroots.

That's what drew Anderson to Giuliani's candidacy. He was impressed "with his emphasis on getting control of spending" during a long four-hour meeting with a group of 40 Republican leaders in San Francisco "who grilled him on all the issues, from gun control to taxes," Anderson told me.

"Basically, he has the same views as Ronald Reagan on economics. He said once you control spending, then you can cut taxes. But the other candidates haven't got it yet.

"Giuliani talked about making the tax rates 'flatter,' lowering the rates by cutting them across the board, just as Reagan did. But he also wants to make President Bush's tax cuts permanent," Anderson added.

To reinforce his economic credentials (as New York City's mayor, he cut taxes nearly two dozen times), Giuliani recently put out a 12-point agenda to "restore fiscal discipline and cut wasteful spending." Among his priorities, he would reduce the federal civilian workforce by 20 percent and require federal agencies to "identify at least 5 percent to 20 percent in spending reductions."

Another senior Hoover fellow, economist Michael Boskin, who chaired the Council of Economic Advisers (CEA) under President George H.W. Bush, is also advising Giuliani. But other colleagues at the prestigious conservative think tank on the Stanford University campus do not share their support.

Indeed, the other candidates have also assembled stellar economic teams whose credentials are decidedly right wing -- pro-tax cut and pro-spending cuts. Romney, who was running TV ads last week in New Hampshire and Iowa on taxes and spending, has one of the strongest groups in place. It includes former Minnesota Rep. Vin Weber, the campaign's policy chairman; Glenn Hubbard, who chaired President Bush's CEA; plus Cogan and Cesar Conda, who was Vice President Cheney's domestic-policy adviser.

"Romney has proposed a spending cap on non-defense discretionary spending that would limit it to the rate of inflation minus 1 percent, and he has pledged to veto appropriations bills that exceed that overall limit," Conda told me. "On taxes, Romney favors making the Bush tax cuts permanent, but he wants to go beyond that and pass a very Reagan-style, across-the-board cut in the marginal tax rates," he said.

How deeply would Romney cut the rates? Reagan pushed the top rate down to 28 percent, compared with today's 35 percent top marginal tax rate. Insiders say Romney's goal is to make "substantial reductions," but he hasn't said how deeply he would go.

McCain's highest fiscal priority will be an attack on wasteful pork-barrel earmarks. "He wants to strip them out, get spending under control and keep taxes low," Holtz-Eakin said.

But McCain's tax-cut credentials are suspect. He voted against Bush's tax cuts, which are responsible for the economy's comeback and the wave of revenues that have sharply reduced the deficits.

McCain flip-flopped last year and supports making tax cuts permanent. But as far as further cuts in the rates, the maverick senator "has not said what his goal would be," Holtz-Eakin said.

Former Tennessee Sen. Fred Thompson has not revealed what his fiscal policies would be. But he has asked former Federal Reserve Board governor Larry Lindsey, the chief architect of Bush's tax-cut plan, to advise him.

Other economic gurus are likely to join these teams in the future. However, according to the chief adviser of one of the GOP's front-runners, the big question is: Who gets Alan Greenspan?