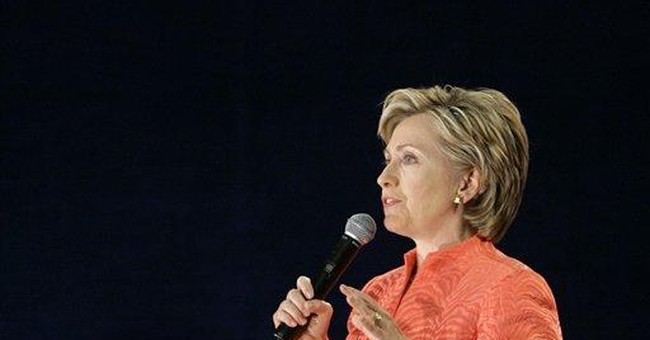 Thus far, none of her political weaknesses as a candidate has changed her front-runner status in the race for the nomination. If anything, she has strengthened her lead over her nearest untested rival, Sen. Barack Obama.

Still, most polls consistently suggest that, while she is the Democratic front-runner in the early run-up to the primaries, she faces huge obstacles in the general election.

For example, a Washington Post-ABC News poll shows she wins a 61 percent majority of Democrats and Democrat-leaning independents among less-educated women with a high-school degree or less. But that number plunges to just 38 percent among female college graduates who turn out to vote in larger numbers.

But only 19 percent of college-educated women think that about her, compared to 50 percent who say Obama is by far the most honest.

Within the context of the general election, Clinton's overall strength among women changes dramatically. A Post-ABC poll in April found a sizeable 43 percent of women (identifying themselves as independents) who said they would not vote for her if she is the Democratic nominee.

An Associated Press-Ipsos poll last week showed that she maintained a "significant lead among nonwhites and lower-income voters, enjoying the support of half of both groups." But the same poll, confirmed by other surveys, also showed "she has been losing ground among whites" and has been experiencing "dwindling strength among men."

Then there is the likeability factor that remains a very serious problem for Clinton, whose unfavorable scores are higher than any of her rivals.

Nowhere is this problem clearer for her than in Florida, a pivotal state in next year's general election that both sides say remains "competitive."

She is the clear front-runner in the state's Jan. 29 Democratic primary, though polls show she continues to trail former New York Mayor Rudy Giuliani in a head-to-head match. The latest Quinnipiac University poll in the state shows Giuliani leading her 47 percent to 42 percent.

Her biggest problem: When likely Florida voters are asked to rate their personal views of the candidates, Clinton's favorability score is 44 percent to 45 percent unfavorable, compared to 52 percent to 27 percent for GOP front-runner Giuliani.

Other national polling data finds that anywhere from 46 percent to 48 percent of general-election voters say they could not support her under any circumstances. "If she were a stock, she'd have a very narrow trading range," said veteran election analyst Charlie Cook.

Then there are Clinton's problems in the South, where it seems unlikely she is going to make a dent in the Republican lock unless the GOP is unable to unite around a nominee next year.

"I don't think Hillary Clinton would run very well among Southern white voters. But if the Republicans remain divided and not united around their nominee, that would give someone like Hillary an opportunity," said Merle Black, a Southern political historian and analyst at Georgia's Emory University who has written widely on the South's electoral realignment.

"I think there has been a lot of disaffection among Republicans in the South for President Bush, especially as a result of the immigration debate. But I don't think that creates more Democrats in the South," Black told me.

Still, despite the Clintons many years in Arkansas, and her husband's enduring popularity among Southern Democrats, how the former first lady does on her own is an entirely different matter.

Bill Clinton, the last Democratic presidential candidate to make inroads in the South, "will campaign for her and that will play itself out," said Chris Kromm, executive director of the Institute for Southern Studies and publisher of the organization's Southern Exposure magazine.

"They can attract a lot of support because of their Southern backgrounds, but she has, more than any other Democratic candidate, high negatives in the South. There are very polarizing responses in the South to a Clinton candidacy," he said.

But Republican Southern strategists like former national party chairman Ed Gillespie acknowledge that holes need to be patched if the South is to remain a firewall against a Democratic comeback.

"The South remains the solid South for the Republican presidential nominee, but Florida is a battleground state and Democrats will target Virginia, too," said Gillespie, who now chairs Virginia's GOP.

Arkansas, the Clintons' former political base, is also shaky territory, he added. "It's the one state in the South where we need to button it down."